The renowned conference “Munich Satellite Navigation Summit” was held on March 5 – 7, 2018, again organized by the Institute of Space Technology and Space Applications (ISTA) of the Bundeswehr University Munich. High-ranking speakers from all over the world met at the Old Bavarian State Bank in Munich to talk about the role of GNSS for future autonomy.

The Munich Satellite Navigation Summit took place for the 15th time and is every year organized in cooperation with the Bavarian Ministry for Economy and the Media, Energy and Technology. The internationally recognized conference with its political focus is unique and attracted about 450 participants from 29 nations. 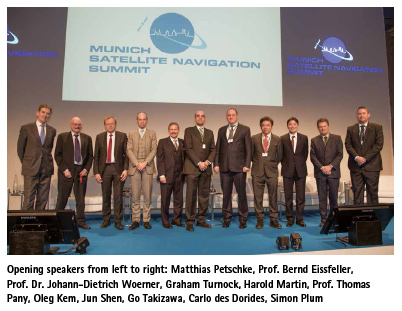 Competition and cooperation in Satellite Navigation: Who wins?

The three-day conference was kicked off on March 5. Prof. Bernd Eissfeller officially passed over the leadership for the Summit to Prof. Thomas Pany, who took over the professorship for satellite navigation in December 2016. With a crystal ball as a symbol for the handover of responsibilities, Prof. Eissfeller gave his best wishes for the future of the conference. Ilse Aigner, the Deputy Bavarian Minister-President and Bavarian State Minister for Economic Affairs and the Media, Energy and Technology, emphasized that the work in the field of satellite navigation is groundbreaking and that the technological progress has an impact on our daily life. Henceforward, she pointed out that the dialogue between citizens, researchers, engineers and politicians of different origins is vital to move forward.

The podium of the opening featured again prominent guests like Prof. Dr. Johann-Dietrich Wörner, Director General of the European Space Agency, or Matthias Petschke, Director of the EU Satellite Navigation Prorgrammes at the European Commission. Together with further top-class representatives of governments and institutions from Europe, the USA, China and Japan they answered questions from the moderator Claus Kruesken, a renowned Bavarian radio moderator. According to the overall topic of the discussion “Competition and Cooperation in Satellite Navigation – Who wins”, the panellists spoke about current collaborations as well as the competition amongst the systems. All representatives agreed that in the end the user of the technology has to be the winner.

Prof. Dr. Wörner highlighted the competition as a motor of innovation. Harold Martin, Director of the National Coordination Office for Space-Based Positioning, Navigation, and Timing in Washington DC, USA endorsed that competition is necessary in order to improve the service for the user constantly. He emphasized the fact that all GNSS are improving and this leads eventually to a continuous improvement of the Global Positioning System (GPS). Harold Martin further pointed out that with the Internet of Things, UAVs and autonomous systems the society finds itself in the “Golden Age of Satellite Navigation”. In the end of the panel discussion it was clear that a good cooperation beyond national borders is necessary to provide reliable signals and to improve the accuracy.

The following two conference days offered the participants a versatile program that was – according to the overall topic “GNSS – the key to autonomy?” – dedicated to the future of autonomous systems and the related role of satellite navigation. In a panel discussion on the requirements of autonomous vehicles several representatives from research institutions and companies got a word. The speakers showed that the position determination with GNSS became a safety-critical application in the framework of autonomous driving.

The chairman of the session, Jari Syrjärinne from HERE Technologies, summarized that the offer of GNSS services is not yet fully synchronized with the requirements of autonomous vehicles. He mentioned that besides the high-precision positioning it is also necessary to ensure the reliability in urban areas. To achieve a high accuracy and reliability, GNSS signals need to be combined with other sensors. Another session on the future of precise point positioning for autonomous systems was chaired by Dr. Herbert Landau, Managing Director at Trimble Terrasat GmbH. One of his panellists, Curtis Hay from General Motors, showed with his presentation that GNSS is essential for cars starting to drive autonomously in 2018 on U.S. highways. Dr. Ignacio Fernández-Hernández, Galileo Commercial Service Manager at the European Commission, announced that Galileo will provide a free-of-charge high-accuracy-service (HAS) in 2020 for similar purposes, which led to intense discussions.Another panel discussion took up the questions on different legal regulations, chaired by Dr. Ingo Baumann and Dr. Oliver Heinrich from BHO Legal. Dr. Heinrich explained that the variety of involved technical components leads to an extensive data collection. On that account, it will also be important to take a closer look at data protection in the future. After numerous interesting round table discussions it became clear that GNSS will play a key role for autonomous systems in the future – whether it is on the road, in the air or at sea.

Besides the technical program, 14 companies and institutions like Airbus Defence and Space, the European Commission or NavCert GmbH presented current activities, products and research results at the international exhibition.

The Munich Satellite Navigation Summit 2019 will take place on March 25 – 28, 2019. Up-to-date information on the conference can be found at www.munichsatellite- navigation-summit.org.