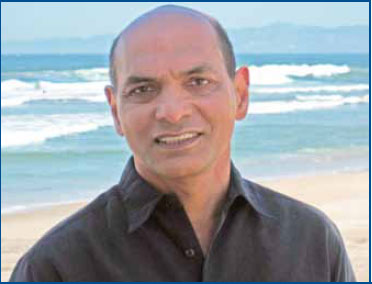 Congratulations on winning the European Inventor Award 2010 along with Steven Chen for your outstanding work on developing powerful chipsets. The GPS industry has already felt the impact of your invention, how do you feel about the recognition finally being accorded to you?

We knew that we had made an impact on the marketplace and the enormity of the change that was created was realized with this award. In addition to feelings of pride for being honoured for our efforts in enhancing GPS technology, it was especially rewarding to be recognized among such an esteemed group of pioneers by the European Commission and Patent Office – we all shared the common goal of advancing areas critical to human development.

Would you please share with our readers the incident that triggered the quest for the ‘small’ chip and the events that followed?

We were driving in downtown Tokyo in 1993 and realized that there was a huge potential for GPS navigation coupled with digital maps. While digital maps were available, GPS did not work in these kinds of urban areas due to signal blockages (e.g. tall buildings, foliage, RF interference, etc.). We really went about solving the urban operation problem of GPS, at a very low cost point. Today’s embedded GPS solutions cost manufacturers just $1 for the HW and SW.

Do you think the use of GPS in our everyday lives would have grown to the extent that it has, even if the chips had not gotten ‘smaller and cheaper’?

I believe the growth of GPS depended on more than just chips getting ‘smaller and cheaper’. I think the first problem that had to be overcome in order to enable mass market use was to make GPS work more reliably. Without that, it wouldn’t be accepted at any price point. I believe the cost is a function of the application. Consumers still pay $200-$300 for personal navigation devices and most car manufacturers still charge $1500-$2000 for an in-car navigation system. In contrast, Google gives you turn-by-turn directions free on your smart phone!

What were the challenges you faced in developing and implementing your idea of a ‘smaller and cheaper’ GPS chip?

The challenges we encountered were beyond just creating and deploying a smaller and cheaper GPS chip. We had to change the way in which a spread spectrum system looks for, acquires and tracks signals. This capability then had to be embedded into a chip cheap enough for the consumer market.

We also introduced the concept of geometric constraints on the solution to operate on reduced degrees of freedom. Hence, the software that we supplied with our chips was equally important.

Could you please elaborate for our readers how the GPS chip technology you developed actually works?

The GPS chipsets we designed essentially “fill in the blanks” by pulling from alternative sources when satellite signals are down. This means that the system can continue to operate even with only one satellite in range.

By earlier standards, GPS systems determined a geographic position via satellite feedback and could only function accurately with as many as four in-range satellites. These systems were expensive and faced major limitations. For instance, if a single satellite’s signal became blocked, the receivers failed to navigate. The new approach we took was to invent the physics of asynchronous signal processing to increase the signal processing power of a GPS chip over 1000-fold. This enabled the weakest of GPS signals to be found within milliseconds and paved the way for the use of handheld GPS navigators in urban environments.

Do you think the consumers in India are ready to use navigation technology?

I think they are more than ready. It’s hard finding your way in most major cities — street names and street numbers are confusing, to say the least. I believe the tipping point for the Indian market is navigable maps.

Some countries have adopted car navigation in a big way already, which countries/region do you think will see the fastest growth in this segment in the coming months? And in your opinion what are the factors conducive for the adoption of this technology?

I think that car navigation is a given capability in most markets today, including China. It’s a feature that is assumed to be either built into a car or in a PND or smart phone. For the markets which have not been penetrated, it’s an issue with digital maps. The cost points are low enough for affordability in the Indian market, for example.

From improving the performance of GPS chips to increasing the yield of Solar Panels – that is quite a journey. Any plans to come back to the ‘GPS application’ fold?

We continue to look at new and exciting GPS applications for the mass market. However, it’s hard to duplicate the success of turn-by-turn directions. That being said, we are examining some interesting mass market security applications.