It is not long after dawn, but the air in the Borajan rainforest in upper Assam is already warm and heavy with humidity. On a fig tree by the dirt track cutting through the forest, a pair of oriental pied hornbills hop heavily from branch to branch, searching for ripe fruit. From the boughs above them comes the be-quick call of a fairy bluebird. Then, the chorus begins.

What starts as a couple of hesitant, mellow coos, erupts into an exuberant crescendo of shrill, rising hoots, shrieks and yowls. The arboreal orchestra reverberates through the forest for a full 20 minutes. Yet, these powerful vocalists – a family of hoolock gibbons, India’s only ape and a gravely endangered primate – are surprisingly bashful and hard to sight. When they finally reveal themselves, the chorus is over, and the family is perched quietly on a shamkathal tree. With one hand on her clinging infant, another holding on to a branch above, the brown-furred mother sits still, with an almost wistful look in her eyes, as she gazes into the distance. If you follow her gaze, you’d see the forest canopy thin out rapidly, and the undergrowth become a thick, disorderly tumble for a 100 or so metres, then open out into a vast, manicured area of waist-high tea bushes. It is a green expanse, with a tree here and there, but neither the scattered trees nor the tea is gibbon territory. Her performing stage, the home of her family – and indeed, her entire world – is in the dense canopy of rainforest trees, strung with lianas, full of flowers buzzing with myriad insects, and laden with fruit over which birds, squirrels, and monkeys squabble. And that world ends with the forest where she sits, beyond which an unliveable green expanse opens out. 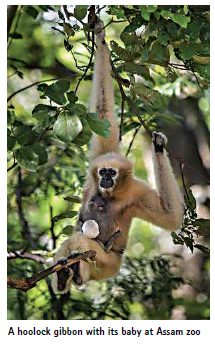 In 15 years, the Borajan rainforest patch has lost over two-thirds of its gibbons. The remaining gibbons that can neither live in nor move through the surrounding tea plantations are isolated. In the nearby forests of Bherjan and Podumoni, which together make up a sanctuary, the gibbon has already gone extinct. Other primates, such as macaques and capped langurs, too have declined or disappeared.

Had the mother gibbon in Borajan not been reading her landscape as every gibbon learns to do, but instead consulted India’s official maps of forest cover, she would have discovered that, according to the authorities, her forest, in fact, did not end at all. It stretched beyond the rainforest, well into the tea. Even as India’s official reports have been claiming every two years that the country’s forest cover is going up and up, the same reports have also been lumping natural forests and commercial plantations as ‘forest’, a decision defended recently even by the environment Minister.

Since 1987, the Forest Survey of India has put out India State of Forest Reports (ISFRs) every two years. The broad intent of these reports has been to track the wealth and health of our forests. In its first decade, the ISFRs reported a decline of some 7,400 sq.km. Thereafter, the forest cover of India, as reported in the ISFRs, has increased by an eye-popping 80,000 sq.km. Yet, for ecologists in the field, and for communities on the ground, this official narrative of steadily increasing forest cover has been remarkably hard to validate. So, what is actually going on?

Starting in 2001, the ISFRs made some big changes to the way they classified and counted pixels in a satellite image as forest. They began using finer-scaled satellite imagery and an entirely digital workflow to analyse them. In addition, the ISFRs also changed their definition of a forest. They now explicitly included any lands of at least one hectare area and with 10% or more tree cover, regardless of the tree species on the land, or the purpose for which it was grown, or its ownership, as forest. So, all of a sudden, tea estates, coconut plantations, mango orchards, homestead gardens of suburban housing developments, and even tree-lined avenues in densely built-up cities were being classified as ‘forest’. In one stroke, just between the 1999 and the 2001, this redefinition helped raise India’s forest cover by over 38,000 sq.km., the size of Kerala. 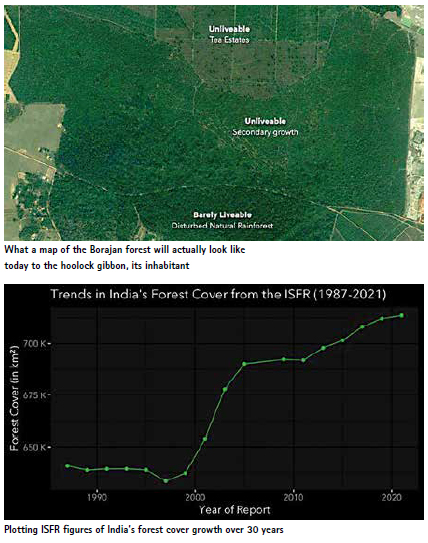 To be clear, there is no harm in mapping and counting tree-covered areas such as plantations, estates, orchards, farms, gardens, and boulevards created through human activity. But what is pernicious is that the ISFRs lump them into the same category as natural forests, whose ecological, economic, and cultural values are incomparably greater and more diverse. Converting any natural habitat into a human-managed land-use area has huge consequences for the land, the kinds of livelihoods it can sustain, and for the lifeforms that can survive in it. ***

Scientific studies have shown that monocultures, such as of eucalyptus or acacia wattles, have a pronounced hydrological impact. Compared to forests or other natural vegetation such as grasslands, such plantations deplete groundwater, have higher surface water runoff, poorer infiltration, and allow only shorter duration dry season flows in nearby streams. Recent studies from the Nilgiris by researchers from ATREE, Bengaluru, and FERAL, Pondicherry, also indicate that plantations can expose catchments to higher risk of floods during extreme rainfall events.

Plantations are also poorer than forests in carbon sequestration, a key ecosystem function essential to tackling the climate crisis. In the Western Ghats, scientists report that carbon stocks in plantations such as teak and eucalyptus are 30% to 50% lower than in natural evergreen forests. Even where carbon stocks in plantations match some forests such as deciduous forests, they are still less stable and resilient than those of natural forests, especially in drought years. India’s ambitious goals under the Bonn Convention and UNFCCC to absorb 2.5 to 3 billion tonnes of carbon dioxide from the atmosphere would be far better served by protection and restoration of natural forests than through tree plantations.

Natural forests are also important livelihood and cultural spaces for millions of forest-dependent people. Tree plantations, in contrast, tend to erode such cultures and livelihoods. In central and eastern India, tribal communities dependent on a wide range of produce from natural forests (such as tendu leaves, mahua flowers, fruits, firewood, and medicines) have had their access to these resources curtailed or denied when the areas were converted to ‘compensatory afforestation’ plantations. A teak plantation is simply no match for a diverse natural forest in the range of resources it provides local people.

The loss and fragmentation of natural forests can also lead to severe economic losses and elevate public health risks. Extensive deforestation in Sonitpur, Assam between 1997 and 2005 led to huge increases in crop losses, deaths of both elephants and humans in conflicts, and an eight-fold increase in malaria in the deforested regions. Mapping such landscape transformation accurately is vital for conservation planning. But sadly, this is easily overlooked when we make poor maps of forest cover that do not distinguish natural forests from highly-modified landscapes merely because the latter meet ISFR’s minimum criteria of 10% tree cover across a hectare to qualify as a ‘forest’.

A third aspect, one that the Borajan gibbons know with every fibre of their being, is amply evidenced by research from around the world. For biodiversity, especially for endemic and forestdependent species such as gibbons, plantations support far fewer species than forests. Studies from many parts of India have shown that monoculture plantations of various kinds — oil palm, teak, eucalyptus, pine, and others — have fewer plant and animal species compared to the natural forests in their respective regions. In Mizoram, for instance, oil palm plantations have only about one-seventh the number of bird species compared to the natural evergreen forests here. Most of the species that manage to survive in plantations are plants and animals of disturbed, open habitats — such as common tailorbirds — that replace native species that include many rare ones and endemics, such as understorey flycatchers and trogons. Similar differences exist between forests and other human-modified tree-covered habitats such as urban parks, campuses, and home-gardens. 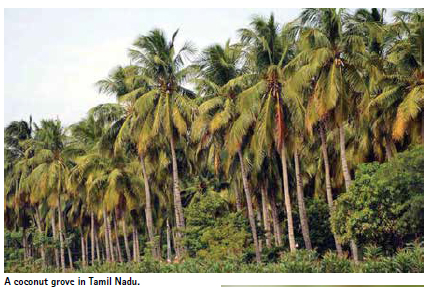 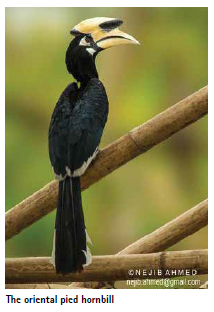 It is not that plantations or urban parks do not have any value for biodiversity. Tea plantations may never be able to support species like gibbons, because the habitat is too altered and the resources such as fruits that the gibbons need are simply not there. But some plantations, such as coffee plantations established under native shade trees in the Western Ghats, may support animals including lion-tailed macaques, an endemic and endangered primate, when such plantations adjoin the wet evergreen forests that are the natural habitat of the species. Forest birds including minivets and tree-dwellers such as giant squirrels may also survive in such plantations, but at lower numbers and only when they adjoin natural forests. Agro-forestry plantations may serve as a kind of buffer habitat in the countryside landscape just as urban parks provide welcome greenery in a city, but neither can become a replacement for natural forests. 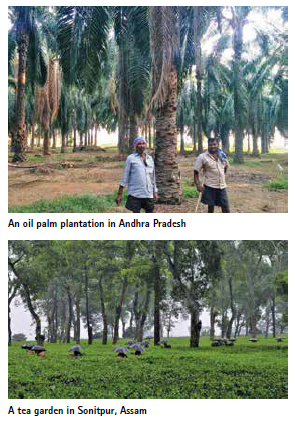 Going forward, it is vital that we understand the huge differences between natural forests and other tree-covered landscapes created by humans. The FAO’s Global Forest Resources Assessment 2020 reports that since 1990, India’s naturally regenerating forests increased only marginally by 6,700 sq.km. while, over the same period, plantations increased by 75,500 sq.km. About 92% of India’s socalled ‘forest cover increase’ between 1990 and 2020 has thus been via plantations.

It is critical that the ISFRs start tracking the well-being of our natural forests separately from other ‘green’ areas that humans are continuing to create by destroying natural habitats. Failing to do so means that we could be presiding over the loss of our natural forests and hastening the impact of climate change even as we mistakenly cheer the increase in various forms of commercial tree cover as gains in forest cover.

Natural forests are not merely the volume and variety of trees they contain. They are an entire magical world unto themselves, a vast web of complex relationships between countless lifeforms, holding incomparably greater ecological value and offering vastly greater economic and cultural benefits than the densest plantation, the most bounteous orchard, or the prettiest tree-lined boulevard.

But what we choose to call a forest must also make sense to that mother gibbon in Borajan, swinging and singing in her rainforest canopy, and to countless other creatures like her for whom the forest is home.

The article originally published in The Hindu is republished with permission.