Innovations & new standards for mapping of villages in Indonesia

Rural development is one of the priority programs in Indonesia today. Upto two billion Rupiah villages fund will be granted for each village. Rural development requires comprehensive planning. This requires a village map and village information system [1].

The Geospatial Information Agency of Indonesia is the only responsible institution in making topographic base map national wide. Village map is seen as a kind of topographic map which is cropped by the village border and made in large scale. Recently, village map products in Indonesia is more similar to the standard topographic map “peta Rupa Bumi Indonesia” or RBI in scale 1:5000 [2]. 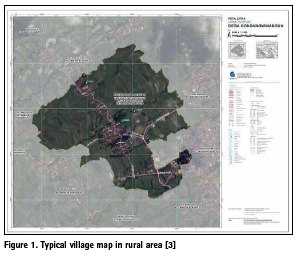 There is an idea to accelerate the village map production, but with the principle of alignment, empowerment and acceleration. The alignment principle said the maps must be made with the emphaty to the villages conditions. There are several type of villages, which should be not seen as homogeneous. There are suburban villages, agricultural villages, villages in forested region and villages in national parks. There are village on mountainous region, and villages in coastal area and small islands. There are villages near state boundary area and isolated traditional villages. The empowerment principle said villages mapping should involve the villages’ people. The villages people should later do the optimal use, maintenance and update the data for their own need, not necessary the engineer or surveyor from the Geospatial Information Agency. It means that village mapping should be easy, and only minimal training should be enough already. The acceleration principle said that villages mapping should be done as soon as possible. The president of Republic Indonesia hope that all villages’ maps of Indonesia should be finished by the terminus of his presidency, and it is October 2019 [3].

The map is produced according the Indonesian National Standard SNI 8202:2015 about accuracy of topographic base maps [4]. The accuracy of villages map 1:5000 according this standard should be 1 m both in horizontal and vertical if we use the class-1 accuracy, or just 2.5 m in class-3 accuracy.

This standard, especially class-1 accuracy is quite hard. Indonesia consisted of more than 190 million hectare lands. According the Statistical Agency, there are more than 75700 villages in the whole country and they are heterogenous. The area of the largest village is about 458,000 hectare, while the national averages is 2,900 hectare. An obligation of map scale 1:5,000 for all villages will be still in dream [5].

An innovation with the consideration of three principle – alignment, empowerment and acceleration – together, would be very difficult without leave the standards and specification. Therefore the objectives of the research are: (1) to evaluate the existing standards and specification for villages mapping; and (2) to find innovations in villages mapping with several condiions.

The research was conducted on 4 types of villages in Indonesia, which some of them could represent also another type.

1) Gondangwinangun in Temanggung Central-Java province (see fig.1) is a typical agricultural village in Indonesia. Some similarities also found in Babakanpari in Bogor, West- Java which is mapped participatory by village development activist.

2) Lembang is selected as suburban village. It is a village with agricultural area but also with hotel and manufacturing industry.

3) Kanekes is isolated traditional villages in Banten which refuse to has any technology included electricity and road for motor vehicles. Large part of Kanekes is covered by protected forest. Mapping in Kanekes can use only hi-res satellite imagery completed with on-foot survey with distance estimation by step counting. no modern survey instrument could be applied. Some villages in Kutai Barat (East Kalimantan Province) and Mimika (Papua province) has similar condition, despite they don’t refuse technology. Some village people and leader themselves don’t know the boundary of their teritory. So we believe that the traditional boundary is the about 2 days on foot in hunting wild animals.

The research was conducted by desain various kind of village maps, experimenting a survey idea, and focus group discussion with the participants of village bureaucrats, academician and development activists form civil societies.

In Gondangwinangun (see Fig. 1), the use of hi-res ortho imagery seem sufficient, although it is in hilly terrain, and terasering farm is clearly visible [7]. In agriculture area, dense settlement is rare so that ortho-image with spatial resolution 0.5 m and Digital Elevation Model from RBI 1:25.000 seems sufficient for village map of 1:5000. But in Lembang (Fig. 2), where denser settlement is exist, higher accuracy map will be necessary. 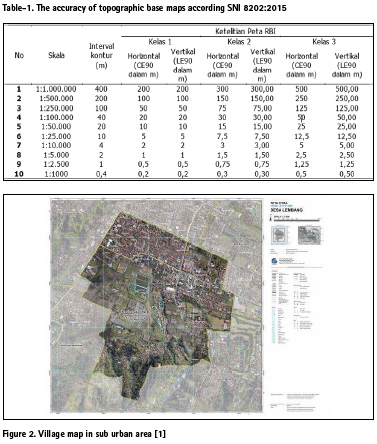 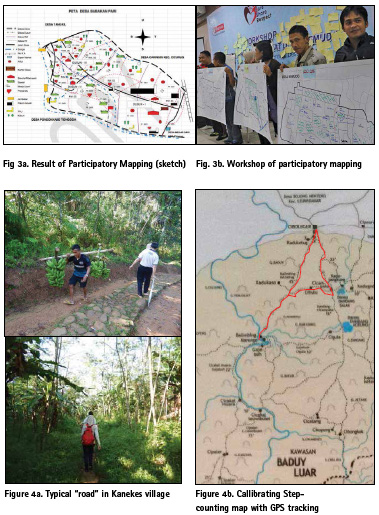 In Babakanpari Bogor, participatory mapping (Fig. 3b) has produced sketch (not yet “map” in geospatial law definition) but useful enough for the work of development activist (Fig 3a).

Although some participatory mapping organization has used satellite imageries, handheld GPS and also drone with camera, but many of them has little competence in produced technical map, but sketch – but their sketch is in many tasks very useful already.

In Temajuk, some students made Tourism Map, although there is seldom tourist to this very isolated village at the border to Serawak-Malaysia. Some data sources is taken from Google-map and SRTM data (Fig. 5). The map will be created using GIS software, so larger maps scale is possible. This map has shown also that isolated village could have also nice map.

Currently, village development programs have involved various programs. But essentially, the development of the village utilizes all available resources in the village, both human and natural resources, and covers all aspects of community life.

As rural development encompasses all of the above activities, the “village map” we are discussing should also represent a map of all dimensions of development in the village.

Village planning and development activities require the availability of geospatial information, especially village maps. The village map not only includes the determination and affirmation of village boundaries but also identifies and inventories the various village potentials, infrastructure conditions, demographics, socioeconomics, and so on. Through the Village Map, should also be known things that can be an obstacle in the effort to empower the potential, so that can be done step completion comprehensively.

The making of village map has various interests, among others [5]:

▪ knowing the position of the village against the surrounding area,

▪ help to overcome the problem of boundary disputes,

▪ as a basis for making village development policies

The limited knowledge of the village and community apparatus on the importance of the Village Map is also often a constraint in the utilization of village maps that have been made though. Therefore, various types of village maps with their territorial boundaries need to be socialized to village officials and village community representatives (village heads, heads of RW) in a forum for socializing the making and utilization of the Village Map, so that the village map can be optimized for use in the planning process and development of a village.

Ideally, the Village Map should be regularly revised, as the village condition changes dynamically over time. This occurs because: a definitive region boundary change (e.g. due to the division of the village), also due to changes in the map component. However, these village map changes can be constrained by the availability of funds. Map is a tool in conveying spatial information. Based on the function then a map should be equipped with various components and completed to facilitate the user in reading / using the map. Elements of map completeness generally include: Title, Legend, Scale, Wind direction, as well as date (map creation date).

Functionally, the necessary Village Map may include the following information maps:

2) Land use maps: housing, non-housing, yards, cemeteries, and others

3) Map of the product processing industry in the village

5) The presence of village social and economic facilities, including: education services (schools / madrasah / pesantren), health services (hospitals / puskesmas), houses of worship, economic facilities (markets, shops, cooperatives / cooperatives village units, rural credit / baitul maal), houses of worship, and others Figure 5. The components number 1, 2 and 5 is standard and already exist in RBI 1:25,000. Number 3 is optional when industry exist in village. This feature is not yet standard in RBI. Number 4 is standard except drinking water which could be very simple in the villages, which could be not mapped in RBI. 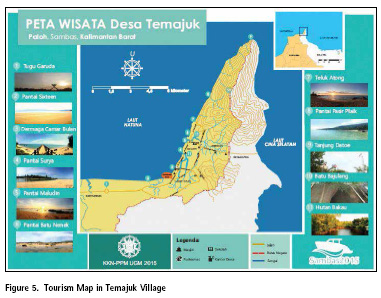 Poverty is one of the major problems in Indonesia. To support the goal of poverty alleviation, which is the main target of national development, it is necessary to create an additional map, the Village “Poverty Map”, which gives an idea of how many people in a village are poor (break down to hamlet level, RW and RT). The map of this condition needs to be overlaid with a map of conditions and the utilization of its natural resources, so it can be seen how the appropriate approach (program) in order to overcome the problem of poverty.

The existence of a comprehensive Village Map is a necessary condition for the planning and implementation of village development. However, the existence of village maps will not benefit, if the map has not been able to be utilized by the apparatus (pamong) village optimally. Also, given that a village changes from time to time due to the development process it does, the village map must be constantly updated (updated) following the rapid development of the village. To overcome this problem, village map design should be participatory by involving the village apparatus from the very beginning in the process of making it, although the implementation can be done by a certain technical team (consultant).

With the participation of the village apparatus in the preparation of the village map, they will understand and master the detailed information presented on a village map; so that will facilitate them in doing village development planning. Then, on a regular basis, their capabilities continue to be upgraded through training programs at the regional (provincial or district / city) level. Although the village map should be accurate, but in these Focus Group Discussions it appears that the public is not really interested in a very accurate map, but a pretty useful map, they understand enough and can update themselves. Only when they work for cadastral, or for building permission, then an incidental surveying could be done.

The result of this study is that village development requires large-scale maps of up to 1: 5,000 but does not require the geometric quality prevalent on topographic map of 1: 5,000. In some villages with huge area of forest or unpopulated part, smaller mapscale is enough. This inaccuracy affects the accuracy of the village area and on the amount of village funds, but all are within the limits of tolerance.. Acknowledgment This research was supported and fully funded by Center for Research, Promotion and Cooperation, Geospatial Information Agency of Indonesia. The author will thanks to Mr. Dadan Ramdani, M.T. and Mr. Agung Syetiawan for the fruitful discussion and to Dr. Ibnu Sofian, Head of the Research Division, for the permanent encouragement.