“Initial Services”, the new phase of the Galileo program

On 15 December last year, during a ceremony which was attended by all the main actors of the Galileo program at institutional level (Commissioner Bienkovska and Commissioner Sefcovich for the European Commission, the Director General prof. Woerner and the Director of Navigation Programs Paul Verhoef for ESA, the Executive Director Carlo Des Dorides for GSA), the “Galileo Initial Services” have officially been declared operational.

This new phase of the Galileo program, associated with the provision of guaranteed services and a series of operational and organizational changes, however, has an essentially political significance: for the first time, the European Commission officially takes its responsibility in the face of European and global users for positioning, navigation and timing services provided by the albeit partially completed the constellation of Galileo satellites.

These services, because of the partial completion of the system, are still limited and guarantee a performance lower than that available in the future, when the constellation and the ground support system will be completed. Nevertheless, they will help improving immediately the applications available to users, even if in a multi-constellation perspective, that is, as integration of services provided by other GNSS (such as the American GPS). In particular, as regards the global distribution of a reference universal time (UTC), with the “Initial Services” Europe can actually claim full autonomy from the other GNSS (for the distribution of the UTC time is in fact sufficient only one satellite in visibility). 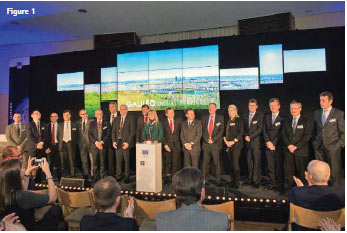 The current status of the Galileo system and its completion plan

A few days prior to the above declaration ceremony of the “Initial Services”, on Nov. 17, 2016, four Galileo satellites were successfully placed into orbit by an Ariane 5 launcher, after a textbook launch carried out from the ESA base in Kourou, French Guyana.

This launch is an important milestone in the history of Galileo, not only for adding in a stroke four satellites to the constellation (which now has 18 satellites in orbit), but also because it is the first quadruple launch of GNSS satellites in history.

Galileo is a European initiative which aims to provide Europe and the whole world a positioning, navigation and timing infrastructure very accurate and independent. Albeit completely autonomous, Galileo will however be interoperable with other existing GNSS, in particular with the American GPS. 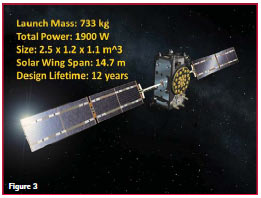 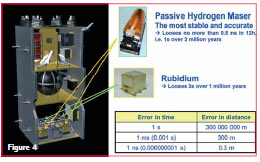 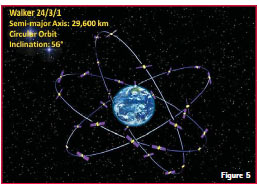 The implementation of the Galileo system has been developed in two phases: an initial “In-Orbit Validation” (IOV) phase”) and a subsequent “Full Operational Capability” (FOC) phase, still under completion.

At the end of FOC, in its final configuration, the Galileo system will include 30 satellites in orbit (24 plus 6 in active redundancy) and a complex ground network, with control centers and stations scattered over the whole surface of the globe.

The Galileo system is designed to provide a range of services, each associated with different radio signals being broadcasted (“Signals in Space”, SiS):

• The “Commercial Service”, one of the innovations introduced by Galileo, which will provide very accurate and, most important, authenticated positioning and timing, specifically for commercial applications;

• The “Search & Rescue” (SAR) service”, part of the wider international Cospas-Sarsat organization, which will provide emergency services to users in case of distress and extreme danger.

Some information about the Galileo FOC satellite is shown in the figure.

The Galileo satellites are not very big: their mass at launch is about 700 kilograms. Through their solar panels they are able to generate a useful electric power of approximately 2 kilowatts. The entire satellite is designed for a lifetime of at least 12 years in orbit.

The heart of the Galileo satellites consists of atomic clocks, which have recently suffered from some problems, however in the process of resolution. Each satellite Galileo embarks four atomic clocks:

• 2 “Passive Hydrogen Masers”, with a stability of 0.5 nanoseconds in 12 hours, that is, of 1 second every 3 million years (!) (At the time, these are the more stable clocks ever placed in orbit);

• 2 Rubidium clocks, with a 3 second stability over 1 million years.

Just to clarify things, think that a good quality quartz wrist watch has a typical stability of one second per year.

The Galileo constellation is distributed over 3 orbital planes, inclined at 56 degrees w.r.t. the Equator. In its final configuration, it will be composed of 24 satellites, 8 for each of the three orbital planes, plus 6 satellites in active (or, as we say, “hot”) redundancy (2 satellites for each orbit plane). The satellites orbit around the Earth at an altitude of about 23,000 kilometers.

The sequence of launches in the IOV and FOC phases is shown in the following figure.

Of the eighteen satellites currently in orbit, only 12 will be operational for the purposes of “Initial Services”. The last four satellites, launched November 17, 2016, are currently under testing and acceptance in orbit, and they will join the others in the provision of services in April and in June. By 2017, therefore, the operational satellites for the purpose of “Initial Services’ will become 16. Constantly updated information on the status of the satellites and their specifications is available on the website of the “Galileo Service Centre (GSC)” in Madrid, the Galileo (more properly GSA) interface with the world of users and of downstream services and applications (https://www.gsc-europa.eu).

In 2017 and in 2018 two more quadruple launches with Arianne 5 are expected, which should bring the total number of satellites in service to 24.

As already mentioned, the ground segment of the Galileo system consists of many control centers, of remote stations (monitoring, Up-Link, TT&C) distributed on the whole Earth surface and of a complex network of communication lines, all together to form a complex ICT (“Information and Communication Technology”) infrastructure.

The various control centers of the system are located on European territory, as shown in the figure.

The last two acquisitions, still being completed, are the “Galileo Reference Centre (GRC)”, located in the Netherlands, which will monitor quality and performance of services continuously and independently from the rest of the system, and the “Galileo Integrated Logistic Centre ( GILC) “, in Belgium, which will have a key role in the maintenance and logistic activities, fundamental to ensure continuity and availability of the system. 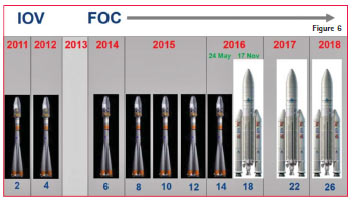 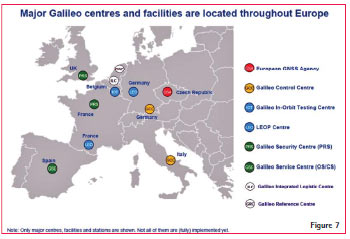 What are the “Initial Services”?

As already mentioned, the “Initial Services” are limited only to certain types of services and with limited performance, compatibly with the reduced number of satellites in orbit. For declared services, however, quality, availability and continuity are guaranteed, according to official documents that, as we shall see, were published and made available to the world of the potential users.

The “Initial Services” constitute an official commitment undertaken by European Commission, GSA and ESA, to manage the complex technical and organizational machine of the Galileo system in order to ensure maximum availability and added value for users.

The change of perspective is drastic and noticeable: from an earlier phase during which the focus was mainly directed to technological, technical and implementation aspects, to the present stage, in which, together with earlier technical and programmatic objectives, emphasis and priorities are given to services and users satisfaction. This obviously leads to an ever increasing attention to operational, logistic and organizational aspects. 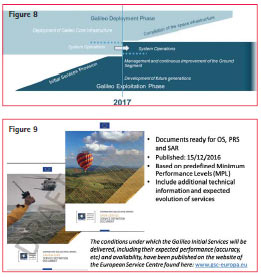 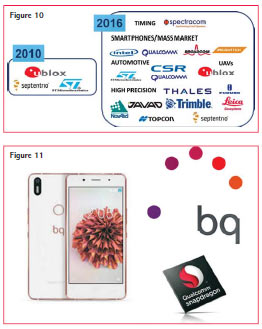 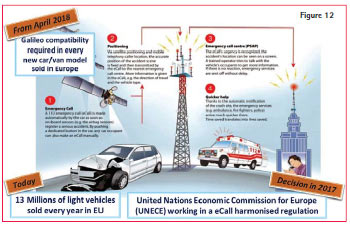 In detail, the “Initial Services” will include the following services:

▪ Open to all and interoperable with other GNSS;

▪ Global, under the control of the Cospas-Sarsat international organization;

▪ Locate signals sent in case of emergency and communicate the distress call to the Search & Rescue centers.

Performance and conditions of the services offered are described in a series of official and public documents issued by the European Commission.

– ~ 3 / ~ 8 meters average localization accuracy, horizontal and vertical, respectively, at 95% of availability and when PDOP <6;

– ~ 9.5 nanoseconds of accuracy in the dissemination of the UTC time, at 95% availability;

– ~ 7 nanosecond error in the offset distribution of Galileo-GPS time, at 95% of availability;

– probability of localization of a SAR distress message within 10 minutes from its sending higher than 98%.

It is evident that the “Initial Services” are just the first, albeit very promising step towards the provision of more comprehensive better performing services.

The “Initial Services” from the user’s point of view

The benefits for users, in Europe and worldwide, arising from the declaration of the “Initial Services” are immediate and tangible. They result largely from an increased confidence of downstream applications and services providers wrt Galileo and especially of manufacturers of integrated circuits (the so-called “chip-set manufacturers”) and of devices (such as smartphones).

Moreover, the “Initial Services” open the way to a series of important regulated services at European level.

In terms of adoption of the Galileo standard among the GNSS receiver manufacturers, we passed from 3 manufacturers adopting Galileo in 2010 to 17 in 2016, representing more than the 95% of the global market.

At the level of socially beneficial European services regulated by the EU, it is worth remembering eCall and the Digital Tachograph.

By 2018, a Galileo receiver will be available in every new vehicle model sold in Europe, allowing the use of the eCall emergency call system, completely free. In case of car accidents, through eCall, a distress message will be transmitted to the single European emergency number, 112, with the information useful for providing support and help.

Another service of great interest for trucking companies is linked to the digital tachograph. A European law provides that from 2019 the newly registered vehicles are equipped with the new digital tachographs, capable of receiving signals of the Galileo satellite navigation system. This will allow the automatic recording of the vehicle position and the monitoring of driving and rest periods; it will also allow the Police to interrogate the device remotely, to ascertain the presence of anomalies. 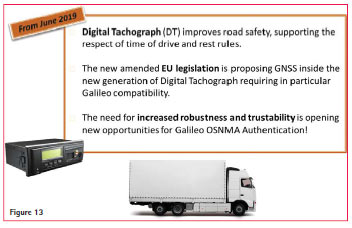 Conclusions and a look to the future

The official declaration of the Galileo “Initial Services” in December last year and the new phase of service delivery confirm, in spite of much controversy, the strategic, economic, technological and technical value of the Galileo program.

Through this program, Europe has become the protagonist in a highly strategic and technologically advanced field, promoting the growth of new technical knowledge and the development of countless industrial and commercial initiatives, all highly innovative.

The greatest promise for the future are derived from a feature that makes peculiar Galileo as compared to other GNSS: that of being able to provide authentication services for position and time. This potential is rendered all the more important as a result of the growing fear of possible “spoofing”, that is of the falsification of GNSS signals.

Authentication is the system’s ability to guarantee to users that they are using signals from Galileo satellites and not from other sources, more or less malevolent.

At the moment two different levels of authentication are being considered:

• one, easier, based on the Open Service E1b signal, which may already be available in 2018, with low implementation costs;

• the other, based on the Commercial Service E6 signal and on a sophisticated cryptographic system, starting in 2020.

It has been noted that the “Commercial Service” is unique and peculiar, not being provided by a ny other GNSS; therefore it represents a great opportunity for Galileo to differentiate itself from other systems and to provide users with a precious added value as compared to already available standard services.