The China-Brazil Earth Resource Satellite- 4A (CBERS-4A) will be launched in the second half of 2019, according to Li Guoping, secretary-general of the China National Space Administration (CNSA).

The National Geospatial-Intelligence Agency is accepting proposals for a new program aimed at developing a system that can visualize agricultural field outlines from satellite sources.

The Agricultural Delineation contest tasks industry to contribute ideas for a remote sensing platform that utilizes satellite imagery to outline large homogenous and heterogeneous fields that are prominent in the sub-Saharan Africa region.

The agency said satellite-based remote sensing technology significantly aids plant health observation processes that are crucial in estimating farm yields and tracking agricultural productivity. NGA will award a total of $15K and select at least one submission as the winner. Winners may opt not to transfer intellectual property or property rights for their technologies.https://blog.executivebiz.com

European lightweight Vega class rocket with a Ukrainian engine successfully launched the Mohammed VI-B Moroccan Earth Remote Sensing Satellite (ERS) into a sun-synchronous earth orbit. The mass of the Mohammed VI-B satellite, created by Thales Alenia Space with the participation of Airbus on the order of the Kingdom of Morocco, is 1,108 kg. The satellite will be used primarily for mapping and land surveying activities, regional development, agricultural monitoring, the prevention and management of natural disasters, monitoring changes in the environment and desertification, as well as border and coastal surveillance. 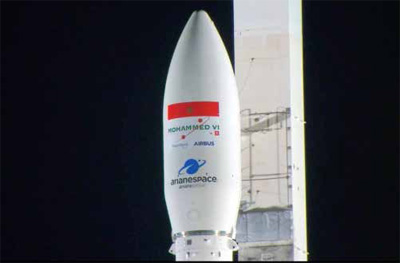 ABB to manufacture an optical sensor for GHGSat

ABB Measurement & Analytics Business Unit in Québec City, Canada has signed a contract with Montréal-based company GHGSat to manufacture and test the optical sensor onboard the company’s third microsatellite (GHGSat-C2) aimed at monitoring greenhouse gases (GHG) emitted by industrial facilities around the world. GHGSat-C2, scheduled for launch in early 2020, will further the deployment of the GHGSat satellite constellation. www.abb.com

Ethiopia To Build And Launch RS Satellite With Chinese Help

Ethiopian scientists and engineers are building a small Earth observation satellite in cooperation with and with funding from China, which will be launched from China in 2019, according to a report in The East
African newspaper. This announcement is the culmination of much effort to bring Ethiopian space ambitions to reality.

Twenty Ethiopian aerospace engineers are involved in the satellite project. Furthermore, about 60 masters and Ph.D. students are also taking part in research and training at the space institute, as well as at the country’s multibillion-dollar Entoto Observatory and Research Centre.

The Kerala government signed a MoU with Airbus BizLab India, a global aerospace accelerator which is part of Airbus, for establishing the Aerospace Innovation Centre in Thiruvananthapuram.

Under the agreement, the Airbus will provide support and mentoring for startups in Kerala and conduct regular workshops and discussions with experts from the aerospace and defense sectors.

Further, the France-headquartered company, which has set up facilities in Bengaluru, Toulouse (France), Hamburg (Germany) and Madrid (Spain) to create a global network of business accelerators, is to run training programmes to acquaint participants with aerospace technologies. www.uniindia.com

Operated jointly by the Chinese Academy of Sciences and the city of Zhangjiakou, the experiment site is a platform to conduct remote sensing technology research and push forward the transformation of innovation achievements. www.xinhuanet.com