The hydrographic survey described in this paper is part of the draft guide for revitalization and improvement of watercourses and flood forecast upgrading for the better defense against the increasingly frequent flooding. It is also an important component of the process to establish good environmental water quality through morphological monitoring of the river branches. Majority of the branches are covered in lush vegetation, forming an important habitat for flora and fauna, a vital part of our ecosystem.

Drava river, located in Central Europe, has a total catchment area of 42 000 m2. It rises in the South Tyrol in Italy, while the Danube flows by the settlement Aljmaš in Croatia, and its total length is 725 km. The total height difference of river Drava in Croatia is 105 m, and the length of the flow is 323 km. Its slope is approximately 0.03%. With the flow of water, the substantial sediment of sand and gravel characterizes the river. Downstream of the river Mura, the Drava River carries about 40,000 m3 of sediment annually. Under normal conditions, transport of sediment in the river is balanced, which means that the sediment removed is replenished with the same amount from upstream. With sediment moving from the source to the river mouth, there is lateral erosion that feeds sediment from the riverbank.

Along the riverbank where the water is deeper, and thus faster, there is increased riverbank erosion. On the other side of the river, the water flows slowly and leads to the deposition of sediment. The consequence of this action on the river channel leads to more twists until the big curve (meander), when the river finally breaks through and creates a parallel short channel. Eventually, a longer branch because of its lower slope and slower flow becomes covered with sediment and forms a separate river stream (figure 1). The Drava River’s branches are some of the last remaining river ecosystems of Europe and home to numerous endangered habitats and species. With the deteriorating river health and many species facing severe risk of extinction, these rivers deserve special attention and protection measures. (Grlica 2008)

It is important to mention that the construction of hydropower plants, river channeling and sediment exploitation has lead to a ‘lack of sediment’ in the river. It means that Drava River removes more sediment than replenished from upstream. Therefore, river sediment is taken from the riverbed, which is increasingly deepening each year with the annual average dents troughs on the river being 2.6 cm/year.

Furthermore, a flood in 2012 was caused by a large water wave on the Drava River that was responsible for more than 15 million Euros in damage. In 2013, floods were a regular occurrence and caused substantial damage. This clearly indicates the importance of improving the forecasting system and morphological monitoring of the Drava riverbed. In addition, according to prognostic meteorological models, we expect an even greater intensity and frequency of the water waves appearance. The results of this survey will be used to upgrade these processes and records and will become an integral part of the main implementation plan for flood control. 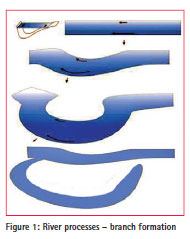 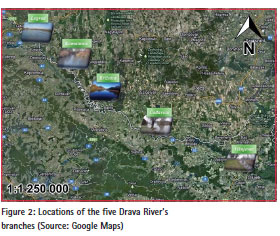 A geodetic survey was performed using a satellite positioning system (GNSS) and where this was not possible, terrestrial measurements were performed with total stations (tachometric method). Specificity of the bathymetric measurement is the integration of the different measurement systems, in order to determine coordinates of the echo sounder and depths in real time. For this purpose, we used singlefrequency Sonarmite echo sounder (235 kHz) and Topcon Base and Rover GNSS RTK System. Software package Hypack Max, which is used in this hydrographic survey, automatically transforms coordinates from WGS84 datum to Croatian Terrestrial Reference System (HTRS96/TM). All devices are connected to a laptop PC and integrated in the abovementioned software Hypack Max.

A base station (Figure 3) was set up above the existing geodetic points along Drava River, while the rover and echo sounder (immersed 0.32 m in the water) were placed on the construction of the side of the vessel. By placing a RTK antenna and echo sounder in the vertical plane, the presence of lateral offset in the position of the echo sounder calculating was avoided. The main challenge was a hydrographic survey of small depths in the river branches, where the bottom of the river branch is covered with plants and vegetation. For this reason, we had a large number of redundant measurements, in order to ultimately obtain reliable and accurate depth information. Since bathymetry is performed using acoustic method, it is necessary to measure the sound velocity in water, which depends on temperature and water depth, ranged between 1,422 m/s and 1,437 m/s. During the hydrographic survey, due to the large amount of precipitation, the water level of the river increased and hydrographic survey of the branches was significantly impeded. We experienced extremely unfavorable conditions during the survey of Drava River, including submerged piers, sedge and other vegetation, and a large water wave that significantly raised the water level of the river and its branches.

When questioned about the accuracy of survey data, there are three errors that affect the accuracy and validity of this survey: GNSS measurement’s error, bathymetric error and echo sounder positioning error. According to statistical analysis of the survey results (distribution of measurements, the standard deviation of the mean error), the reliability of hydrographic survey and required centimeter accuracy are confirmed and satisfied (s vertical= 2.8 cm, s horizontal= 2.3 cm). The following are some of the main branches features, as a result of the survey analysis.

In this narrow river, there is not enough space to create large deep meanders, less slope and this slows down the flow. But, it is possible to create short inlets and river branches that are quickly overwhelmed with new sediment deposits. Maximum surveyed depth in this river branch is 8.16 m and its position is shown in figure 4. 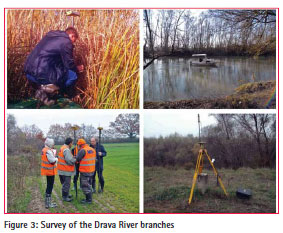 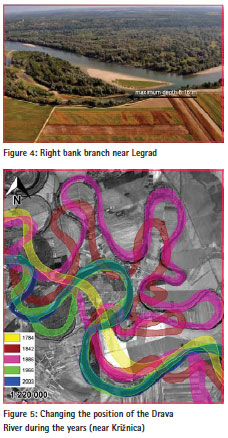 Inflow of water into this branch comes out of Drava River and Gliboliki stream. The western part of the branch (to the mouth of the creek) is steeper and the surface is gravel, while the eastern part of the branch is tilted lower and the surface is sand. The nearby hydroelectric plant caused permanent changes in the water level, which required extra vigilance during this survey. The maximum surveyed depth in Right bank branch near Komatnica is 5.66 m.

At a length of 13.5 km, the left bank branch near Križnica is the longest branch of these five branches. The research of this survey, in agreement with long-term professional research, has undoubtedly demonstrated the necessity to ensure the dressing of fresh water from Drava River in order to reduce the impact of eutrophication and siltation intensity. The river has changed its course due to various regulatory interventions implemented in the 1820s. These interventions were implemented without a comprehensive plan and had almost no theoretical scientific basis. Further interventions in the period between 1842 and 1966 were designed to shorten the waterway and to improve the protection of the surrounding area from flooding. Finally in 1966, adequate access to regulatory procedures was performed. However, there is still room for better river channel management, which is discussed in this paper. All of the above resulted in the formation of the Left bank branch near Križnica (magenta color in figure 5), which among the other branches, is the subject of this hydrographic survey.

This branch was created after making an artificial ditch, which shortened Drava River by 1.8 km. It was found that while diverting water into the new channel, there was a significant slowdown in the old water channel, and thus an appreciable deposition of sand, which resulted in raising the bottom of the old riverbed. In contrast with the ditch, the speed of water flow increased considerably, and there has been increased riverbed erosion and falling water levels. The result of these actions over time will completely interrupt the flow of water in this branch, and it will gradually heal the forest. Maximum depth in Drava River channel is 9.77 m, while in the branch it is 6.90 m.

The branch near Višnjevac part of the former course of river Drava in the 60s and 70s to mid-and high water represented the branch total length of 4.66 km.

A system derived from hydraulic engineering was introduced to stabilize the riverbank and control the junction of the right bank and Drava river. However, this caused a deposition of sediment on a low bank and the connection of the branch with low water levels was disabled. Maximum depth in this branch, according to highest water level is 4.34 m, while maximum depth in Drava River channel is 4.95 m.

Revitalization can be easily defined as a return to the situation as close as possible to an unchanged ecosystem. The problems of the branches water systems are mainly linked to the supply of nutrients (nitrogen and phosphorus), sediments and other organic pollutants carried from agricultural areas, and the absence of adequate sources of fresh water. The overload of water with nutrients and poor water-flow are preventing development of swamp flora that additionally slows down the water current.

Eutrophication is a global problem. In the world, there are 415 eutrophic ecosystems, and that number is growing as a result of growing human population and increased pollution. From the hydrologic point of view, the river branch is characterized by very small flows and unsteady water regime. Ultimately, all this leads to a reduction in the volume of water or its complete disappearance (figure 6) in the river channel. This results in reducing the number of specimens of fauna and further settling of all pollutants. Actions and parameters that provide revitalization progress are: water surface management by digging canals and clearing forest vegetation, silt removing, marsh vegetation cleaning and the construction of hydraulic structures, reducing the difference of water level between river channel and river branch. 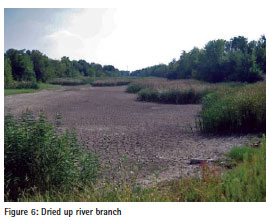 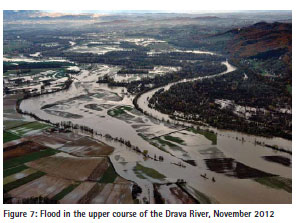 As noted above, every year, at least one of the rivers in Croatia has recorded the emergence of new extreme value. Meteorological models in future, expect even greater changes (Figure 7). This is just another example of why we need to work systematically to improve the system of hydro-meteorological forecasting. Output data of this survey provides information of the river channel configuration and of maximum volume of water that a river channel can accept. In Croatia, there are natural retentions such as Lonjsko polje and Kopački rit, where part of the floodwaters can be stored. A simple and effective project that is being implemented, ‘Development of the system for the prediction of floods on the river Drava’ will contain a database that can be used to create digital mathematical model of flood forecasting. Databases will inter alia contain the following information: the amount of water discharged by the hydroelectric plants, amount of rainfall and melting snow in the Alps, geoinformatic and hydraulic models for Drava’s hydrographic stations, morphological monitoring data obtained by hydrographic survey, etc.

The ultimate goal of this project is to establish a mathematical model, which is going to be used to analyze the possibility of establishing a system for flood forecasting and simulation occurrence of flood waves. Outputs of this survey show that due to digging canals, water level in branches decreases, therefore branches could affect water from the Drava River. The construction and upgrading of flood protection is a complex and lengthy process, but that does not mean it should be pushed aside. Ultimately, the damage from floods and droughts are a much higher expense than the investment to prevent the damage from the natural disasters.

The areas that we have displayed have the characteristics of high biodiversity, and water surfaces of the branches represent the potential for tourism and recreational purposes. The performed hydrographic survey is a contribution to various studies, such as: revitalization, forecast systems improving and morphological system monitoring with the purpose of creating better hydrologic and ecologic conditions and the preservation of these undeniably important habitats.