In the last few months we have been witnessing a remarkable (and, to some extent, surprising) increase of interest for GNSS high accuracy positioning, involving both systems and receivers.

In particular, this growing demand for increased positioning accuracy is evident for mass-market applications, in areas such as:

Several GNSS augmentation methods have been developed over the years, aiming at improving the navigation system performance not only in terms of positioning accuracy, but also in terms of reliability, availability and sometime integrity. 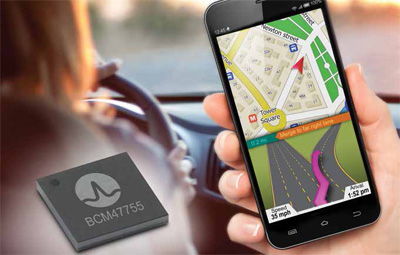 One first family of augmentation systems is based on the principle of “Differential GNSS”. This method consists in using reference receivers, positioned in fixed, well-located positions, known as “base” stations, to derive correction errors that apply with a good degree of approximation to all user receivers located nearby.

These systems provide a wide-area or regional augmentation of existing GNSS (e.g. GPS) through the broadcasting of additional satellite messages to users.

The augmentation messages are derived after processing information collected by dedicated stations and then sent to one or more satellites (usually geostationary) for broadcast to the end users. The augmentation messages can also be broadcasted to users via Internet. This is the case of the EGNOS Data Access Service (EDAS), a terrestrial commercial service offering ground-based access to EGNOS data through the Internet on controlled access basis. Geared to users requiring enhanced performance for professional use, EDAS provides users with the same data broadcast by the EGNOS satellites (EGNOS Message) in near real-time (figure 2).

The RTK technology is a differential GNSS technique based on the use of code and carrier phase measurements from the satellites of the GNSS constellation and on corrections provided wirelessly to a user receiver by a local reference ground station, at a well-known location (figure 3).

The drawback is that for carrier-phase measurements, phase ambiguity has to be solved, a process requiring non-negligible convergence times.

Atmospheric (ionospheric and tropospheric) corrections require a reference station (the “base station”) not too far away from the user (the “rover’), with baselines not longer than about 15 kilometers (usually between 10 and 20 km).

Besides atmospheric corrections, the base station helps reducing errors from such sources as satellite clock and ephemeris.

With PPP, satellite clock and orbit corrections (significantly more precise than those available in the broadcast navigation message), generated from a network of global reference stations and calculated through sophisticated algorithms by a centralized processing facility, are delivered to the end users via satellite or over the Internet (figure 4).

It is worth noting that, as compared to RTK, PPP does not provide atmospheric effects corrections. On the other hand, PPP does not require a local base station and offers a worldwide service.

As compared to RTK, PPP offers a worldwide service and, being based on a global network of reference stations, guarantees a highly redundant and robust infrastructure (while RTK is totally dependent on the availability of the local base station). One drawback of PPP is that the processing algorithms generating orbit and clock corrections require rather long convergence times to achieve maximum performance, although realtime or quasi real-time PPP systems are being developed. 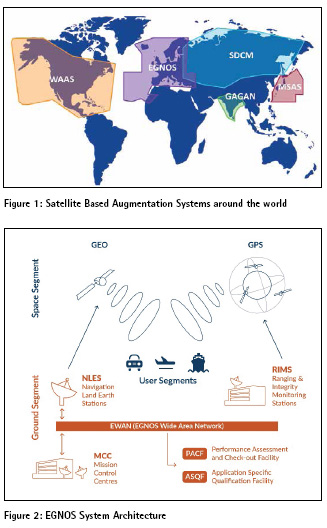 As already mentioned, technologies for very accurate positioning, such as RTK and PPP, have been adopted so far mostly by professional users, not targeting massmarket applications such as, e.g., smartphones.

Something is changing, as far as systemlevel solutions are concerned.

In Japan, the GPS-based, regional Quasi-Zenith Satellite System (QZSS) is already planning to provide centimetre-level positioning and navigation services over the Japanese territory. The system is based on more than one thousand reference stations to constantly correct satellite errors. The corrected data is then compressed for real-time transmission back to the constellation of three satellites for broadcasting to user receivers.

In Europe, a fairly radical and strategic decision was taken in March 2018, with the Implementing Decision by the European Commission redefining the scope of the Galileo Commercial Service.

The EC decision, recognizing the increasing demand for higher positioning accuracy by fast expanding sectors, such as autonomous vehicles, robotics and drones, introduced a “free-access” High Accuracy Service (HAS) on E6 signal, allowing users “to obtain a positioning error of less than two decimetres in nominal conditions of use”. The convergence time of this new service should be , on the other hand, in the order of about five minutes, thus making it attractive for massmarket applications, including smartphones, but not in direct competition with “external” services such as RTK and PPP.

The approach of offering the High Accuracy Service (HAS) to all interested users on a free of charge basis, with content and format of data publicly and openly available on a global scale, was deemed to increase the public benefit delivered by Galileo. It was also estimated that it will contribute to position Galileo in the market as the first GNSS system offering high accuracy services on a free of charge basis. On the other hand, since departing from the scheme originally foreseen by Implementing Decision (EU) 2017/2243 of 8 February 2017, the new Implementing Decision was taken after consultation with all potential stakeholders.

The practical implementation of the EC decision is being studied jointly by the European GNSS Agency and ESA, leading to industrial developments in 2019. 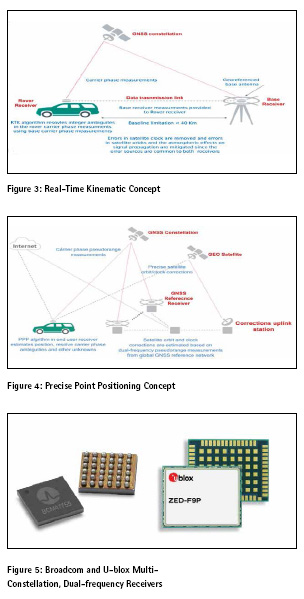 The technical specifications and technological solutions adopted vary slightly among the four manufacturers, but they all start from recognizing the same market requirements:

In particular, the lane-level navigation accuracy on highways (to allow Lane-Departure Warning, LDW) seems to be a very important requirement for car manufacturers. All receivers of new generation, apart from some technical differences, are essentially based on the same architecture: multiconstellation, dual-frequency, high power efficiency, low cost.

The dual-frequency capability (L1/E1 and L5/E5) makes them able to better cope with reflections off buildings in urban environments: multipath correction, detection of reflected signals, ionospheric errors correction, resolution of phase ambiguity (in case carrier-phase measurements are performed) are all made possible.

It is worth noting that dual-frequency operation starts being attractive because as from 2018 there are enough L5/E5 satellites in orbit (about 30, including Galileo, GPS-3 and QZSS). 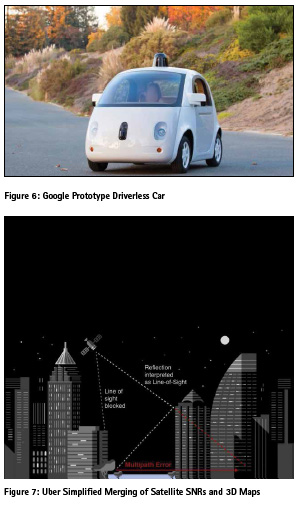 Autonomous and connected vehicles are positioning themselves among the most disruptive mass-market technologies of the future. Despite some unfortunate accidents and a rather different approach to standardization and regulation, the deployment of autonomous vehicles will soon become a reality on US and European road networks. Autonomous vehicles can take over activities traditionally performed by the driver, thanks to their ability to sense the environment, navigate and communicate with other vehicles and road infrastructure when combined with connected vehicle solutions. Widespread adoption of autonomous driving can reduce traffic accidents, reduce fuel consumption and improve traffic flow, as well as improve driver comfort.

In other words, while cars took decades to be widely adopted, autonomous driving will have a worldwide spread in just a few years.

For some years now big corporations such as Waymo (Waymo is an autonomous car development company and subsidiary of Google’s parent company, Alphabet Inc.), Uber, Tesla, GM and many others, from Mazda to Maserati, have been testing their driverless cars (figure 6).

While all of them consider standard-precision GNSS as an indispensable component of their automated vehicle sensor suite, they still view it as a secondary sensor, not accurate or reliable enough for positioning the vehicle within the lane.

In order to achieve the level of positioning required for the safe operation of autonomous vehicles, an intimate fusion of on-board sensors, computer 3D modelling and GNSS technologies is needed.

One well known problem is that ground vehicles often operate under sky-obstructed areas, where GNSS signals can be altered or blocked by buildings and trees. In these cases, GNSS receive rs can become wildly inaccurate, just when they would be most needed, i.e. in densely populated and highly built-up urban areas (where incidentally most of the users are located).

It is worth noting, at this point, that the PPP technique was proven to be not only able to provide centimeter-level positioning accuracy, but also to be a very effective tool for remote time and frequency synchronization of atomic timescales and oscillators.

The PPP technique, as applied to time transfer, can be seen as a “One Way” time transfer approach. Experimental campaigns have demonstrated that this alternative synchronization technique offer high-level performance, comparable with state-of-the-art methods, such as “Two-Way Satellite and Frequency Transfer” (TWSTFT). As compared to TWSTFT, a “One Way” technique based on the Galileo HAS would be simple and low cost. Moreover, given the recent development of GNSS chip sets for high accuracy in massmarket applications, it can be expected in the near future a generation of multi-constellation, dual-frequency receivers, able to take advantage of the Galileo High Accuracy Service.

The availability of low cost, high performance receivers for time and frequency synchronization purposes could be an enabling factor for the development of the future 5G network infrastructure. As a matter of fact, the nodes of the 5G network will require synchronization accuracies between 5 and 20 nanosecond, almost one order of magnitude better than what presently achievable with a GNSS receiver (unless “Common View” techniques are used).

These recent developments in the “race” for higher positioning accuracy prove on one side that there is no single technology capable of providing a reliable and continuous solution in all environments, so the need for integration and fusion; on the other hand, that high accuracy navigation is part of a much larger technological revolution, triggered by 5G, IoT, unmanned vehicles, vehicle-to-everything (V2X), augmented reality