In Mongolia, several Continuous GNSS stations are operated and managed by different agencies, private companies and national scientific institutions and these stations have been built for purposes such as topography, cartography, cadastral surveying geodynamic, mining and crustal movement monitoring.

This recent development and establishment of GNSS networks in Mongolia make it possible to define an increasingly detailed spatial and temporal resolution of the ongoing crustal deformation and to visualize the complex interplay between different orogens, for example: in the Baikal-Mongolia collision zone.

All the available GPS raw data in the time span 1994-2017 were analyzed by using the Gamit/Globk software and constructed time series of GNSS stations referenced to a common reference frame that can give fundamental information for both regional and local geodynamic studies and finally produced the tectonic velocity field providing an updated detailed picture of the kinematics (velocity map) and deformation pattern (strain map) of the Mongolian area.

We describe concisely the operations used to collect, archiving and processing the raw data in order to combine all this information into one uniform crustal velocity field.

Results can be further used for geokinematics purposes, and for a better understanding of the active geodynamic processes that are deforming the Earth’s surface in Mongolian territory and surrounding regions.

The present status of the networks

The requirements for establishing permanent stations are based on both off-line and real-time data availability, imposed by global, regional geodetic and local survey activities.

The first permanent IGS network station – ULAB, was founded in 1997 in a combined effort of the Geo Forschungs Zentrum (GFZ) Germany and Institute of Astronomy & Geophysics (IAG) of Mongolian Academy of Science (MAS) (Calais at all, 2003) and now serving as master station in all GNSS based geodetic activities in Mongolia.

Nowadays, in Mongolia, several Continuous GNSS stations are operated and managed by different agencies, private companies and national scientific institutions. These stations have been built for purposes such as topography, cadastral surveying, geodynamics, geophysics and reference stations.

GNSS network operated by Agency of Land management, Geodesy and Cartography (ALMGG), consists of more than 40 stations. This network has been initiated by periodic measurement of GNSS-permanent stations established since 2011 on the Mongolian territory, both on a national as on an international level. All of the stations are equipped by Trimble NetR8 and Trimble NetR9 with Trimble choke ring and Trimble Zephyr Geodetic antennas. The types of antenna that were mounted on the braced monument and also some of them installed on the roof of a building. Nowadays the position of the stations which the antenna installed on the roof of a building has been moved to the land due to supply of other GNSS applications such as geodynamic and also to be reconciled with IGS standard.

CORS network provides daily files with a sample rate of 30 seconds Receiver Independent Exchange (RINEX) format. The GNSS data collected at these sites are made available to the public in the Hatanaka compressed files. Yet other stations are still planned to be built. This network supplies centimeter level real time corrections for applications such as cadastral, surveying, construction and mining. Based on these products, the Geodetic service of Mongolia contributes to monitoring of tectonic deformations in Central Asia. 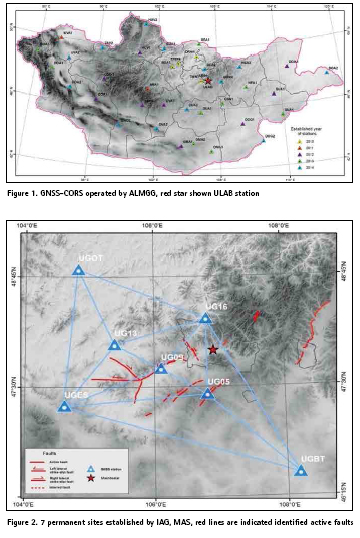 In addition, focusing on great scientific interest for seismic hazard aspects, the Seismological Department of Institute of Astronomy & Geophysics (IAG) of Mongolian Academy of Science (MAS) has established the GNSS geodetic network in Ulaanbaatar, the capital of Mongolia and its surrounding areas, that includes 7 permanent sites: UG05, UG09, UG13, UG16, UGOT, UGES and UGBT. This network targeted by providing up-to-date estimates of continental deformations and including evaluated resulting from plate tectonics stresses. This will support the development of improved risk mitigation procedures.

Configurations of polygons and quantities of permanent sites are determined with regard to the geological and geomorphological structure of the region, previously identified active faults as preferred structures along which stresses are transferred through the deformational area and paleo-and-recent seismicity indicators. The network fully equipped by Trimble NetR9 receiver and Choke ring antenna with Radom.

Since our permanent stations involved with sustainable power and data telemetry, we developed automatic facilities to handle the GNSS data archiving procedures.

The other GNSS-CORS operated by some private company such as geodetic and mining business.

In addition to the permanent installations, to support the geodynamics research in Mongolia, more than 40 GNSS campaign sites have been constructed. The location of points has been correlated with geological and tectonic composition and regular observations were conducted from 1997 and accumulated data are included to this study.

First stage of the processing involved of quality and quantity check of the observations, performed with TEQC software developed by UNAVCO. 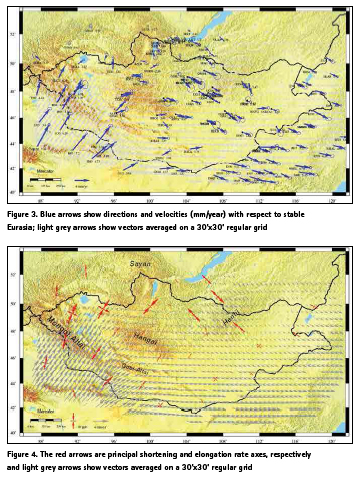 Processing parameters were an elevation mask 100, IGS precise orbits and earth rotation parameters, absolute antenna phase center offsets and variations and all estimated parameters were loosely constrained. For velocity estimation, data from as a minimum four observation sessions conducted in 1997-2017 were used. Though, only sites with uncertainty less than 1.5 mm/ year are shown here and they used for the next velocity and strain analysis. Horizontal components of the velocities for these network points were estimated in ITRF2014 global system; components of local velocities (“intraplate”) respect to stable Eurasia have been also calculated. The relative strain patterns derived from those horizontal GPS velocities using Delaunay triangulation.

The velocity map is consistent with previous findings from Calais et al. (2003) and Lukhnev et al. (2010) but adds new information thanks to the CGPS sites included in our processing in particular in central and eastern Mongolia.

A first important observation is that residual velocities are small at sites located on the stable Siberian platform (CHAD, ARAD, ORLK, IRKT), which indicates that the Eurasia-fixed reference frame chosen is adequate for the analysis.

Overall, velocities with respect to Eurasia show a clockwise rotation indicative of:

i. NNE-SSW compression in the western part of the study area since velocities decrease in that direction from south to north. This is also shown on the strain rate map, with the compressional principal axis of the horizontal strain rate tensor striking NNESSW. This is consistent with geologically-observed shortening across the Altay. It is interesting that this compression reaches as far north as the Hovsgol area, as also shown in Lukhnev et al. (2010).

ii. a central and eastern domain where velocities are on the same order that is likely to be quite rigid. The strain rate map indeed shows that this broad domain is deforming at a much slower rate that the surroundings.

iii. NW-SE extension across the Baikal rift zone that concerns the wide area of Baikal + Transbaikal, as also shown on the strain rate map.

iv. NNE-SSW in the western Gobi Altai, that transitions eastward to a strikeslip with decreasing strain rates.

The velocity and strain rate maps therefore show a fairly “rigid” (very low strain rate) area that consists of Hangai + eastern Mongolia, surrounded to the south and west by compression, and to the north by extension. This pattern of deformation is difficult to explain if its only driver is the India-Eurasia collision, as shown in Vergnolle et al. (2007). It indicates that the role of mantle flow and/or that of east Asia subductions are likely important.

▪ The GNSS/cGPS geodetic networks have been designed and established in the territory of Mongolia since 1997.

▪ The method of research of geodynamic parameters fulfilled in plate tectonics of active regions of Mongolia. It will be used for an assessment of environmental, social and economic risks of development of Mongolia and will be implemented for assessment of deformation of the Earth’s surface.

▪ The result of the preliminary analysis is being used to evaluate the stress accumulation and the earthquake probability on the Mongolian territory.

I would like to express my deepest appreciation to Eric Calais, ENS, Department of Geosciences, France, for his great support and guidance throughout my visit at ENS.

We would also like to acknowledge with much appreciation the crucial role of the staff of Dr. /Prof. Gan Weijun from State Key Laboratory of Earthquake Dynamics Institute of Geology, China Earthquake Administration, who kindly provided us the preliminary result of the Crustal Movement Observation Network of China (CMONOC) from the automatic data processing system of their research group. With this support we was able to fulfilled the geodynamic parameters of our study area.