Where to plant a trillion trees to save planet Earth?

Restoration of forests has long been seen as a potential measure to combat climate change. The latest special report by the Intergovernmental Panel on Climate Change suggests that an increase of 1 billion hectares of forest will be necessary to limit global warming to 1.5°C by 2050. What has so far been unclear, however, is how much of this tree cover might be actually possible in the existing conditions on the planet. 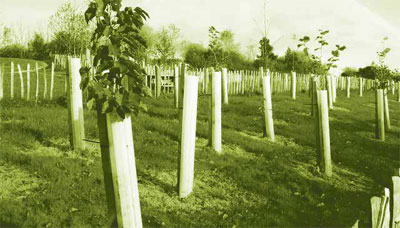 Now, researchers have quantified how much land around the world is available for reforestation, as well as the extent of carbon emissions these would prevent from being released into the atmosphere. The study, by researchers with the Crowther Lab of ETH Zurich university, has been published in the journal Science.

On the basis of nearly 80,000 images from around the world, they calculated that around 0.9 billion hectares of land would be suitable for reforestation. “We are trying to restore a trillion trees,” according to Thomas Crowther, coauthor of the paper and founder of the Crowther Lab. If an area of 0.9 billion hectares is indeed reforested, the researchers calculated, it could ultimately capture two-thirds of human-made carbon emissions.

“One aspect was of particular importance to us as we did the calculations: we excluded cities or agricultural areas from the total restoration potential as these areas are needed for human life,” lead author Jean-François Bastin said.

Earth’s continuous tree cover is currently 2.8 billion hectares, and the researchers calculated that the land available could support 4.4 billion hectares, or an additional 1.6 billion hectares. Out of this, 0.9 billion hectares — an area the size of the US — fulfil the criterion of not being used by humans, according to the paper. These new forests, once mature, could store 205 billion tonnes of carbon, the researchers calculated. That is about twothirds of the 300 billion tonnes of carbon that has been released into the atmosphere as a result of human activity since the industrial age. “But we must act quickly, as new forests will take decades to mature and achieve their full potential as a source of natural carbon storage,” Crowther said.

In a post on the website of Legal Planet, a joint initiative of University of California’s Berkeley and Los Angeles law faculties, Jesse Reynolds of UCLA described the new research as “misleading, if not false, as well as potentially dangerous”. Among various arguments, Reynolds noted that the authors do not consider how such reforestation might come about when the land proposed to be reforested is owned and managed by many private persons, companies, nongovernmental organisations, and governments. Reynolds also found the authors’ estimate of carbon removal per area “remarkably high”. https://indianexpress.com

The U.S. Army has selected the Woolpert and Black & Veatch joint venture and Quantum Spatial Inc. to a $49 million contract to provide surveying and mapping services. Work locations and funding will be determined with each task order. The U.S. Army Corps of Engineers (USACE), Wiesbaden, Germany, is the contracting activity. The USACE received 10 bids via an online solicitation process for the firm-fixedprice contract, according to the U.S. Department of Defense. woolpert.com

YellowScan has announced the release of CloudStation, its new software providing a complete solution to create and manipulate point cloud data. It allows the user to extract, process and display data immediately after flight acquisition. The auto-generation of flight lines and the production of LAS files are now done in a few clicks. www.yellowscan-lidar.com

Of this funding, the Committee allocated $5 million for 3DEP to accelerate the achievement of 100 percent coverage of the Great Lakes region. The Great Lakes have nearly 11,000 miles of coastline and, with associated lakes and tributaries, make up the largest surface freshwater system on Earth. The 3DEP initiative will provide data that will enable scientists to address these critically advancing concerns.

Google parent company Alphabet has announced the release of a detailed smart city development plan for the city of Toronto in a 1,500-page document. According to the Master Plan, The development of Quayside is planned to occupy 12 acres land, the Villiers West is planned to take 19 acres of land and the rest of the IDEA District would take 159 acres of land. This plan would create at least 93,000 more jobs, with 44,000 permanent and direct jobs by 2040. At least half out of the 44,000 jobs would be in manufacturing and cultural sectors, around a quarter of jobs in the administrative support, retail and transit. It is expected that at least 10,000 jobs would be created in finance, real estate and management sectors.

As radar satellite acquires data 24 hours a day regardless of darkness and or weather conditions, they allow rapid imagery collection whatever the location. Combined with this new automatic geodesy processor, radar data enables prompter processing and delivery of GCPs. Airbus GCPs are able to complement and even substitute in-situ measurements. This enables time and cost savings while providing a homogeneous data source. www.airbus.com