Galileo is Europe’s contribution to the multi-GNSS to provide a highly accurate, guaranteed global positioning service under civilian control. Offering dual frequencies as standard, Galileo is expected to deliver extremely good realtime positioning accuracy. From users’ point of view, availability of Galileo’s signal would help in achieving a multi- GNSS environment for redundancy and system independence. Since its deployment Galileo has generated interest among research groups worldwide. Reports from several groups tracking Galileo signals and obtaining Galileoonly position solution have been obtained. This paper presents a brief description on Galileo deployment and reports from groups situated in different parts of the globe on Galileo tracking; the paper finally describes the first report of Galileo-only solution from India and the preliminary results obtained.

The first Galileo In-Orbit Validation Element GIOVE-A, was successfully launched on 28 December 2005 by the European Space Agency and was retired in June 2012. GIOVE-B, with advanced payload over GIOVE-A was successfully launched on 27 April 2008 and retired in July 2012. In the next phase, In-Orbit Validation (IOV) satellites, which are closer to the final Galileo satellite design, were launched. Presently there are 4 IOV satellites in orbit designated by the PRN #E11, #E12, #E19 and #E20 as described in Table 1. More details can be found in [1, 2].

With four operational Galileo IOV satellites, efforts have been seen over the globe for tracking and observing 3-dimensional (3-D) position solution using Galileo-only or Galileo with other GNSS constellations. Reports from several research groups are brie?? y described here. On 12 December 2011, one of the two GALIEO IOV satellites launched on 21 October 2011 started transmitting its payload signal on E1 band over Europe and on the same day was successfully acquired and tracked by the researchers of the Navigation, Signal Analysis and Simulation (NavSAS) group of Istituto Superiore Mario Boella, Politecnico di Torino, Italy. Two days later, on 14 December, the E5 signal was also available [3]. On 01 December 2012, the E1 signal of the Galileo Flight Model 3 satellite (FM3 or GSAT0103 launched on 12 October, 2012) was tracked by the same group for the first time and reported on GPS+Galileo PVT Experiment done on 21 December 2012 [5]. On 12 March 2013 ESA announced about the 3-D position fixing using Galileo. This first position fix of longitude, latitude and altitude took place at the Navigation Laboratory at ESA’s technical heart ESTEC, in Noordwijk, the Netherlands on the morning of 12 March 2013 with an accuracy between 10 and 15 metres [6] and the positioning capability was confirmed by the NavSAS group [7]. Within a day of activation over Europe, Galileo satellites were visible over North America. The Position, Location and Navigation (PLAN) Group, University of Calgary, Canada captured and processed signals from Galileo IOV satellites. Researchers from PLAN group simultaneously tracked GPS L1 and GLONASS L1 for combined solutions in real time on 13 March, 2013 [8]. The next report can be obtained from the researchers of the NAVIS Centre in the Hanoi University of Science and Technology, Hanoi, Vietnam. On 27 March 2012, four Galileo-IOV satellites were visible at the same time from Hanoi, Vietnam. The researchers of the NAVIS Centre could, for the first time, receive the signals of all the four satellites and track them [9]. The report of Galileo-only solution can also be obtained from M/S Javad GNSS Inc. On the basis of the data collected from the Moscow region, Russia report on position fixes using Galileo-only and GPS+GLONASS+Galileo constellations can be found 29 April, 2013 [10]. 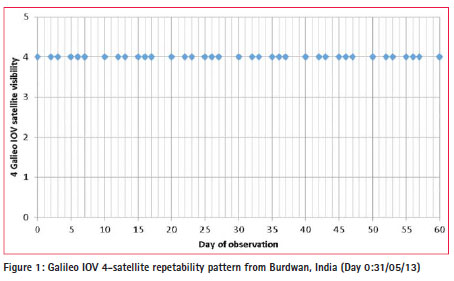 GNSS Activity Group, The University of Burdwan, India, is engaged in exploring the use of multi-GNSS signal for the benefit of the Indian user community. The group therefore, tried to track Galileo signal and to obtain Galileoonly position solution. As a part of the available infrastructure, a Javad DELTA G3T receiver with Galileo tracking capability was used for the purpose. After some initial system problems and unhealthy Galileo FM-4 status, first Galileo-only 3-D position solution was obtained on 03 July 2013 from Burdwan, India (Lat 23.25450 N, Lon 87.84680 E) using E1 and E5 frequencies. Subsequent sections brie?? y describe the efforts and the results obtained.

Orbitron is a free satellite tracking software for radio amateurs and observing purposes [11]. Using Orbitron with updated NORAD two-line element sets for the Galileo satellites from Celestrak website [12], simultaneous visibility of all 4 IOV satellites is predicted for tracking. The predicted 4-satellite visibility pattern as found from the simulation is shown in Figure 1. It may be noted that with the current constellation status, 4-Galileo visibility has a typical pattern from India. Observation day #0 is 31 May 2013 as seen in Figure 1.

Since early June, 2013, efforts have been concentrated on simultaneously tracking 4 Galileo IOV satellites for Galileoonly, 3-D position fix. Data for 01, 02 and 03 Galileo satellite(s) tracked in tandem with other constellation(s) (GPS/ GLONASS) was also recorded. After the outage of IOV-4 (PRN #E20) satellite during 14 June to 25 June 2013 [2] and some initial receiver setting problems, on 03 July 2013 all the four Galileo IOV satellites were tracked simultaneously for the first time from India for more than three hours during 16:00 to 19:00 hrs IST (+05:30 UTC) providing 3-D position solution. Corresponding screenshots of the Orbitron prediction software and the NetView utility of the receiver are shown in Figures 2 and 3 respectively.

Data was recorded in 1 Hz frequency for Galileoonly position solution for 03 July 2013 in two slots of duration 90 min and 70 min respectively and for 25 min on 12 August 2013. Data for Galileo with other constellations were also recorded for observing the multi- GNSS capability. 2-D Position solution results obtained from Galileo-only fix is shown in Figure 4 while Figure 5 shows the comparison of 2-D position solution using Galileo-only and all usable GNSS (GPS+GLONASS+ 4 Galileo) satellites.

Results obtained by analyzing the data for the Galileo-only position solution are presented in Table 2. Inspection of results shown in Table 2 reveals that, the operational IOV satellites, when available simultaneously, is capable of providing 3-dimensional position solution with modest stand-alone accuracy even with slightly degraded Position Dilution of Precision (PDOP) values. Peak to peak variation of Latitude is found to be higher than that for Longitude values. The situation may also be observed from Figure 4. 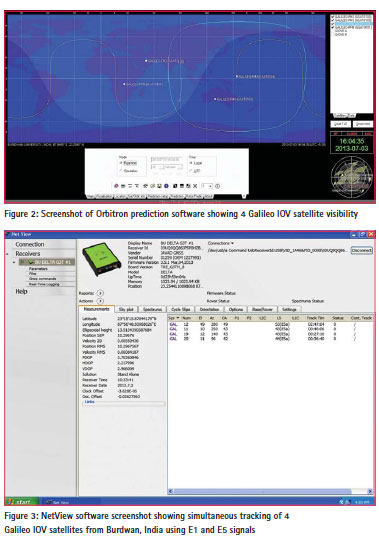 Galileo data is also recorded at 1 Hz frequency along with other available GNSS signals- GPS, GLONASS and GPS+GLONASS. Data obtained from the observations would provide the initial results of multi-GNSS interoperability as obtained from India. Galileo operation in tandem with one or more other available GNSS signals definitely would attract attention of the users for future successful integration of all available systems towards a robust and efficient multi-GNSS environment. One, two, three of four Galileo satellites, as available, have been used together with usable GPS and/ or GLONASS satellites to obtain at least four satellites or more. While using only 4 satellites, efforts have been there to select a well scattered set of satellites over the sky as far as practicable. Results obtained from the observations as presented in Table 3 point towards a successful integration of multiple systems. Use of all available GNSS signals (4 Galileo with all useable GPS and GLONASS) provides at least 23 satellites for use with encouraging solution accuracy and satellite geometry represented by PDOP values.

Observations presented in the paper reports the first successful Galileo-only position solution from India that indicate towards the much-awaited multi-GNSS signal availability for the Indian users increasing the possibility of redundancy and system independence. After successful GLONASS availability from India, Galileo availability would call for more detailed and longterm studies with fully operational Galileo along with GPS and GLONASS. 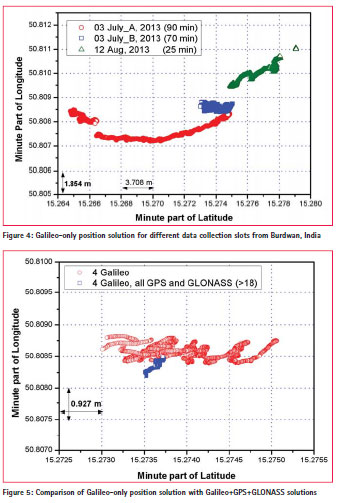 The authors would like to acknowledge the free software tool Orbitron (© by S. Stoff) that has been used for plotting Fig. 2