BIM, can be a solution for property disputes?

The rise of the property disputes

Minimizing property disputes in multiowned buildings (MOBs) become a global challenge to our society (Blandy, Dupuis, & Dixon, 2010). Most people in urban areas live in MOBs, referred to as condominium, strata properties, or apartment. With the rise of urbanization, this building is a dominant type of private property in cities. Although legal basis varies from country, MOBs, in general, form a complex arrangement of composite ownerships across the whole building (Johnston & Reid, 2013). The ownership of each flat owner involves (1) individual ownership of the flat and (2) communal ownership of shared areas. The possessor also holds memberships of owners’ corporations (OC), entities in charge of owning and managing the common areas. Consequently, living in MOBs shapes the exclusive use of a dwelling with the joint use and management of common properties (CP) as a member of OCs. A high degree of shared rights, collective decisionmaking, and financial responsibilities among owners inevitably cause many conflicts in MOBs that escalate to property disputes (Easthope & Randolph, 2018; Hastings, Wong, & Walters, 2006). In the success of urban management, the response to disputes in using and managing MOBs plays a crucial role.

In this circumstance, the social responsibility of surveyors to harmonious urban living has stressed, especially in jurisdictions adopted the Torrence title system (i.e., Australia, Malaysia, Singapore, Russia, and some states in Canada and United States). Surveyors in those countries solely define the intertwined ownership rights, responsibilities, and restrictions (RRRs) of flats and common areas in cadastral plans, using the specification of boundaries (Kaufmann & Steudler, 1998). This plan delimits 3D spatial extent of ownership RRRs associated with using and managing MOBs. It provides a mechanism for upkeeping assets and controlling resident behaviors in MOBs by defining (1) who owns what, (2) who pays for what, and (3) who entitles to use what. We can easily observe that building subdivision failing to meet the needs of owners and residents leads to property disputes, of which the occurrence gradually increases (Easthope et al., 2014). Together with it, lack of understanding of owners and residents of ownership RRRs have caused the disputes resulting in emotional concern and huge litigation costs (Shin, Rajabifard, Kalantari, & Atazadeh, 2020). How to create and communicate the ownership RRRs in MOBs needs to be discussed for ensuring a peaceful and vibrant neighborhood in MOBs.

If you look at the real cases of property disputes, the linkage between ownership RRRs and the dispute occurrence becomes clear. This article focused on the context of Victoria state, Australia, to gain meaningful observation. Nearly 20% of 220 tribunal cases from 2015 to 2019 show relation to issues stemming from ownership RRRs in the Plan of Subdivision, the cadastral plan in Victoria. Generally, the issues are classified into 11 types, describing two streams: (1) interpretation of subdivision plan associated with using and managing flats and CPs and (2) problems in the plan regarding fair distribution of ownership power among owners. Table 1 summarizes the details of the types of issues in 41 property disputes. 32 dispute cases show relations with more than two issues.

All types of issues in disputes were triggered by the combined effects of five aspects of the subdivision plan: (1) ambiguous definition of boundaries, (2) inappropriate arrangement of ownership extent, (3) unfair allocation of coownership share of CP to each flat, (4) inappropriate separate blocks of CPs, and (5) improper tiered structure of OCs. In Victoria, multiple sets of CPs and their managing groups are formed within MOBs by the subdivision plan; it is to fairly cater to different interests of owners in managing MOBs, based on the real extent of usage by different owner groups. The first two aspects bring misunderstanding or confusion in their RRRs for using and managing MOBs to communities in the buildings (residents, owners, OCs). The last three aspects contribute to the failed delivery of fair approaches to accommodate the varied needs of communities over CPs and to achieve the benefit principle (the owners that benefit more from each CP block pay more); the failure frequently leads to disputes. It infers that a significant number of disputes can be avoided with better decisions of ownership RRRs by surveyors and better communication about it among the communities. 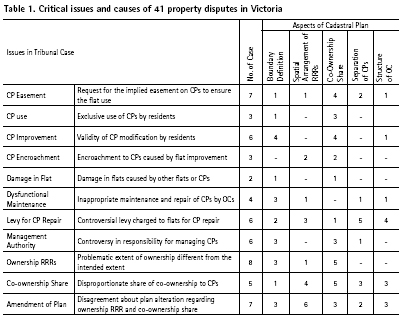 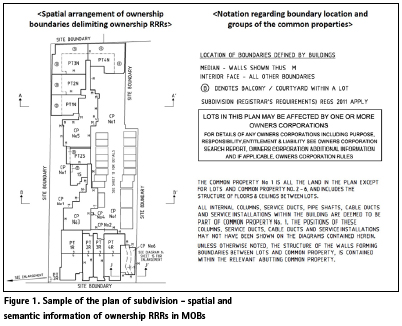 In current practice, cadastre systems are mainly based on 2D-based analog cadastral plans for building subdivision. In Victoria, all five aspects of ownership RRRs are also represented in the plan of subdivision, using 2D-based representation (figure 1). The 3D volumetric extent of RRRs is abstracted into floor and section plans, and all the other information is stated as the textual description (Libbis, 2018). This method is likely that differing views can be reached over the same diagram; the numerous pages of diagrams representing all the RRRs are also not straightforward and challenging for understanding (Rajabifard, Kalantari, & Williamson, 2012). In addition, the analog approach limits opportunities of surveyors for exploring and analyzing the various forms of ownership RRRs to deliver better MOB management outcomes. Frequent failure to create overarching and holistic governance mechanisms in MOBs has offered MOB communities to years of costly disputes. These challenges emphasized the need for the move toward a 3D digital data environment in the building subdivision.

Building information model (BIM) is highly regarded as an ideal 3D data environment for representing 3D properties in the land administration business. From the object-oriented approach, BIM serves as a 3D information model of the building, which involves spatial and semantic information of all building elements (Eastman, Teicholz, Sacks, & Liston, 2011). It has the high potential to be a digitalized information repository of stratified ownership RRRs in buildings, especially for high-rise and high-density MOBs. The leveraging of BIM to building subdivision practice can facilitate better communication of ownership RRRs and better quality of the cadastral plan of MOBs. 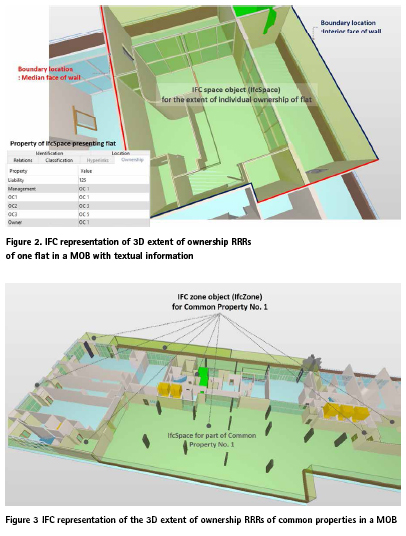 The BIM representation of complex ownership RRRs in MOBs can be a foundation of an integrated information platform for supporting the improvement of MOB communities’ perception of ownership. The open data standard of BIM, IFC, has been designed to address information in the architecture, engineering, and construction (AEC) industry. However, high interoperability and flexible expandability of IFC allow to its application as an information source for 3D ownership of MOBs (Atazadeh, Rajabifard, Kalantari, & Shin, 2018). In IFC, the spatial aspect of ownership – vertical and horizontal arrangement of RRR extent delimited by boundaries – are represented by geometries of building and spatial elements. On the other hand, textual descriptions associated with RRRs, such as membership of OC, boundary location notation, and co-ownership share of each flat, are defined as attributes and properties of the relevant building and spatial elements. 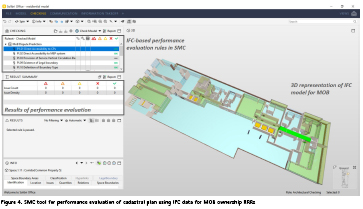 In the IFC data structure, the ownership information of a MOB in Figure 1 is represented by IFC objects for space and building elements. In the case of a flat, its vertical and horizontal dimension is expressed as a space object overlaid on the surrounding building elements (wall, window, door, floor, and ceiling). The exact locations of boundaries of the flat are visually defined in the 3D data environment, without the help of notation (see Figure 2). In addition, the other textual information regarding the membership of multiple OCs and co-ownership share are incorporated into the space objects, as their attributes.

Same as the representation of flats, the spatial components of each CP throughout a MOB are clearly defined by objects for space and building elements. In IFC, functional spaces (i.e., corridors, lobby, lift, entry) of CPs are defined using space objects overlapping on building elements. In addition, the complicated distribution of multiple CPs spanning several floors can be clarified by grouping their space compositions into individual zone indicating each CP (see Figure 3).

The above mentioned five aspects of the subdivision plan are well demonstrated in the IFC data structure. Particularly, two aspects (spatial arrangement of RRRs and boundary definition) that frequently caused a misunderstanding of ownership and led to the inappropriate behaviors of MOB communities were well described in the 3D model. In IFC, the 3D visualization provides the explicit image of ownership boundaries and RRRs on top of the building structure. Furthermore, its digitalized representation enables the communities to interact with the various views of ownership by navigating and querying the 3D model. BIM model could remove the ambiguities in identifying RRRs associated with using and managing MOBs; it facilitates the understanding of ownership that potentially prevents the conflict in using and managing MOBs.

The dispute caused by five aspects of the subdivision plan can be interpreted as a result of the inappropriate features in the plan. It means that examining the extent to which each feature is suitable to meet OC communities’ requirements can support preventing potential disputes. In this context, the extent can be defined as the performance of the feature; the performance evaluation can indicate the existence of dispute triggers in the plan. This evaluation can provide surveyors with early warnings of potential disputes in their proposed plans and an opportunity for improving the plans to minimize the potential disputes.

• a BIM model of the cadastral plan

• a set of the performance for identifying dispute triggers

The performance can be extracted from the needs of OC communities in tribunal cases or practical issues in MOBs. According to them, the evaluation rules and tools based on the BIM data structure need to be developed.

Using a commercial tool, the feasibility of performance evaluation for dispute prevention was examined. The Solibri Model Checker (SMC), a tool to create and check the rules on IFC data, was employed. In SMC, 28 performances were automatically checked using IFC representation of the cadastral plan in Figure 1. Figure 4 represents the SMC checking results for direct accessibility for CPs, one of the performances associated with the ownership arrangement.

According to the defined rules, SMC checked five aspects of the cadastral plan and identified the dispute triggers within them, while minimizing human involvement and interpretation. It also reduces the time and effort to recognize critical issues, compared to the manual review that overlays and analyzes numerous pages of 2D-based plans. The use of BIM can be a solution for improving better consistency in building subdivision for avoiding conflicts than the current practice that relies heavily on individual experience and knowledge without a systemic process.

The property disputes in MOBs become a global challenge for the seamless management of urban areas. A significant number of disputes have resulted from the issues in ownership boundaries and RRRs in the cadastral plan. However, the current 2D document-based practice shows limitations to resolve the issues by improving the plans efficiently. Accordingly, the 2D plan aroused the residents’ misperception in using and managing their properties that frequently end with inappropriate behaviors and disputes.

The article addressed two new roles of BIM in response to dispute triggers in cadastral plans. As a means of better communication, BIM has the potential to deliver a full image of 3D ownership RRRs to residents in the most straightforward way. In addition, BIM also can provide the platform to examine and analyze the building subdivision in the 3D digital environment in order to facilitate the improvement of the performance of cadastral plans.

This research is a part of an Australian Research Council Project titled “3D Property Ownership Map Base for Smart Urban Land Administration” at the Centre for SDI and Land Administration, the University of Melbourne. A variety of industry partners are participating in this project: Land Use Victoria, Intergovernmental Committee on Surveying and Mapping (ICSM), and the City of Melbourne. However, the views expressed in this article are the authors’ alone.

Rajabifard, A., Kalantari, M., & Williamson, I. (2012). Land and property information in 3D. In FIG Working Week – Knowing to manage the territory, protect the environment, evaluate the cultural heritage. Rome, Italy.