In recent years, ‘Google Maps’ become the most widely used open source web based mapping application as it provides high resolution satellite imagery, street level cartographic maps, panoramic views of streets, real time traffic information and shortest travel route by private or public transportation in any part of the world. The high resolution maps and satellite imagery from Google maps are extensively used by the scientific community to study urban landuse changes1, 2, detect oil palm plantations3, delineate cropland4 and agriculture areas5, measure landscape attractiveness6, locate crime hotspots7, evaluate walking distances for vascular claudication patients8, dengue surveillance system9, etc. Though Google maps are used in various scientific applications, however the question of accuracy of the maps needs to be explored especially when dealing with the political boundaries MAPPINGor borders between states or nations. As a pilot study, the state boundary from Google maps are compared with that of Survey of India (SOI) toposheets for a sample area to check whether the boundaries shown in Google maps are matching with that of toposheets or not. Six toposheets numbered 57O/4, O/8, K/16, L/13, P/1, P/5 covering Vellore district in Tamil Nadu and Chitoor district in Andhra Pradesh was obtained from Survey of India Nakshe portal10. 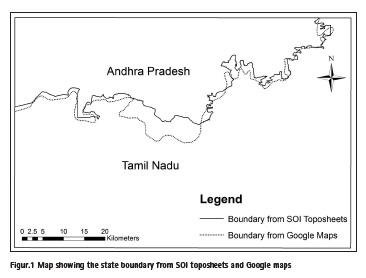 The toposheets were georeferenced using the known latitude and longitude values and were mosaicked to form one single image. It was then converted from geographic coordinate system (latitude/longitude) to projected coordinate system (northing/easting) using Universal Transverse Mercator (UTM) projection in Arc GIS 10 software. Onscreen digitizing of the boundary between the two states was manually done. Google map covering within the toposheets was imported as image file and georeferenced using the SOI toposheet through image to image registration.

Locations which can be identified in both toposheet and google map such as road intersections, railway crossings were considered during image to image registration. After georeferencing, Google maps were projected to the UTM coordinate system and the state boundary was manually digitized. From the results shown in Fig.1, it can be seen that there is a mismatch between the boundaries and the Google map boundary does not follow the true boundary shown in SOI toposheets.

The actual boundary from SOI toposheets measures a length of 199.647 km whereas the Google map boundary measures only 150.500 km. Almost 50 km length has been missing in Google maps for this sample area itself. Because of the discrepancy in lengths between the toposheet and Google map, the area covering within the states also differs dramatically. For example, the true area of Tamil Nadu covering within these toposheets is 3168.8 sq.km, whereas the area from Google maps is only 3034.54 sq.km. Similarly in Andhra Pradesh, the area measured from toposheets is 1329.743 sq.km whereas in Google maps it is 1464.003 sq.km.