The Survey of India (SoI) is the pioneer surveying and mapping agency for India. The organisation conducts surveys at regular intervals and generates classified and nonclassified topographic map sheets using a polyconic system of projection. Modern applications are now demanding maps at higher scales and precision. Thus, cartographers have been shifting to other standard systems of projection. Currently, the Universal Transverse Mercator (UTM) projection system is the most popular system for making maps or executing projects in combination with the WGS84 datum. SoI has also started generating a public series of maps in this popular combination, in order to comply with the need for standards.

The UTM system is a specialized version of the Transverse Mercator (TM) cylindrical projection system. With the TM projection, for a particular study area, a cartographer selects a central meridian, a latitude of origin, the false easting and false northing and the scaling factor, in addition to the semi-major axis and the flatness (1/f) factor. On the other hand, UTM is a special form of Transverse Mercator projection where the Earth is divided into various zones numbered from 01 to 60. The central meridians in each of these zones are different. Although, officially the UTM zones extend up to 3.5 degrees on both the sides of the central meridian to allow for one degree of overlap [1], the standard is to restrict the extension up to 3 degrees. This implies that the difference in the meridians for two consecutive zones is 6 degrees. The other parameters, namely the scaling factor, latitude of origin, the false easting and northing, semi-major axis and flatness remain the same. Also, the project parameters vary for the northern and southern hemispheres. For India, the UTM zones vary from 42 to 47 starting from the state of Gujarat on the extreme left to Arunachal Pradesh on the extreme right.

Map makers, nationally and internationally, have been facing a frequent dilemma of selecting the UTM zone for a particular study area which falls in two consecutive zones e.g. some parts of Dehradun, situated in North India, fall in zone 43 and others in zone 44 [2-4]. As a result, cartographers cannot select the UTM and therefore reluctantly choose a locally suitable projection like Transverse Mercator or Lambert Conical Conformal (LCC) with appropriate parameters. In general, it is observed that in these cases, the cartographers select the central meridian at the centre of the area of interest. Though, this map serves the purpose locally well, it results in different central meridians being selected by different agencies. Further, different agencies use different names to represent their local projection. The non-conformity to one global system leads to difficulty in working with these maps produced by different agencies, as they do not conform to one meta-data system.

In this article we propose an alternate system of projections which alleviates the problem of selecting the UTM zones for study areas lying in two successive UTM zones for large scale maps derived from high spatial resolution datasets. . 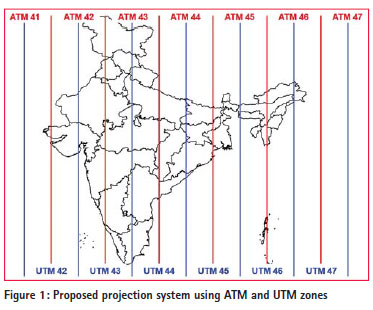 Our proposed system defines an alternate TM (ATM) projection system for which the central meridians are parallel to the central meridians of UTM but shifted by 3 degrees to East. All other parameters of the ATM remain same as UTM. A schematic view of the ATM and UTM is shown in Figure 1. As is obvious, besides the usual UTM zones we have now additional ATM zones e.g. ATM42 through ATM47 to cover India. We define the ATM system as follows: If UTMz is a zone number with a certain central meridian X degrees and other defined parameters, then ATMz would have a central meridian as (X+3) degrees with other parameters remaining the same, which is also clear from the Figure 1. While defining this new and alternate form of TM, it is assumed that a study area will be less than 6 degree in longitudinal extent, which is very likely the case for the projects that need data on a 2D Cartesian system, as produced by TM projection.

We recommend that one should always use the UTM system. However, in cases where the project extent lies in two different UTM zones, the ATM system should be used.

This new form of TM projection in conjunction with UTM will provide a solution for map making for those areas which fall on the boundary of two UTM zones. Additionally, we propose that this system of ATM should be standardized, so all organisations adopt this system which will facilitate structured generation of meta-data, thus exchange of data products.