GNSS positioning in the urban environment remains challenging, because of the occurrence of many satellite signal reflection and diffraction, also called multipath, that, in the best case, combine with the direct signal, but – in the worst case when the direct signal is obscured – make signal tracking drift unboundedly.

Recent research investigations carried out in the GEOLOC laboratory of the Ifsttar (the French institute of science and Technology for transport, development and network) with the SCM (Société de Calcul Mathématique) have shown that a simplified 3D modelling of buildings at both sides of streets, named “urban trench” for that reason, can benefit in the process of satellite visibility check and GNSS positioning.

These urban trenches can be computed from 3D-city-model using road and buildings layers. Initially, the rover is assumed to occupy the arc segment that represents the street. That way, only left and right distance and height attributes depict any urban trench section, which has the advantage of being easily compliant with the existing formats of navigable maps.

Using the satellite positions in azimuth and elevation, our algorithm determinates whether their signal is in Line-Of- Sight or Not (NLOS), with respect to the modelled facades all around. In case of NLOS, a correction of the pseudo-range measurement is made.

The geometry of this model being simplified, and the initial position approximated, the first deterministic approach has been modified: a probabilistic approach is proposed. From this second approach, an urban trench protection level can be computed (UTPL), which provides an integrity indicator adapted to the urban environment.

First, the main cause of degradation of GNSS signals in urban areas is due to the morphology of the environment and in particular the geometry of the buildings. These not only cause multipath (i.e. interference between direct and reflected signals) which deviates the tracking loops and thus cause positioning errors, but also hide some satellites whose signal is no longer received. The signals received from satellites that are not in direct line of sight but undergoing one (or several) reflection (s) before being received cause the biggest measurement errors. They are called: NLOS (non-line-of-sight).

There are different solutions investigated to reduce the effects of NLOS multipath:

• depending on the reception signalto- noise ratio: actually, a reflection attenuates the signal. This method gives interesting results in terms of detection and exclusion;

• filtering measurements based on a predictable dynamics of the receiver. This method assumes velocity, acceleration, turn rate or requires additional sensors: it is also valuable to perform NLOS detection and exclusion;

• using a 3D city model, and determining a trust area where the sky visibility is good [1]. The problem is that this visibility area is obviously dependent on the position (unknown) of the mobile. Some works propose to use a fisheye camera pointing to the zenith [2]. Without this, it is necessary to make one (or more) assumption(s) on an initial position and then refine this position. The main contributions are: [3], [4], [5], and [6] to which the present research investigations consist in a continuation.

The geometry of the buildings we propose is simplified, to such an extent that, between nodes (i.e. intersections), we consider that the width of a street is constant as well as the height of left and right facades. Another approximation we still make is to project to predicted position of the mobile onto the local road arc segment. So, 4 parameters only depict the geometry we set per arc segment: left and right distances between this arc segment and the footprint of both facades (W1 and W2), and the height of the building on both sides (H1 and H2).

Such modelling is easy to extract from usual data base like IGN BD Topo ® in France.

The format, i.e. the fact that the urban trench parameters are attached to the road arc segments, makes it really easeof- use in any real-time embedded mapmatching process for car navigation. The information to store is more than 2 orders of magnitude lower than that of a typical detailed 3D model one sets up in a ray-tracing approach of this problem.

An example of a street view in Paris, Grands Boulevards, and the corresponding BD Topo ® extract is given in Figure 1. 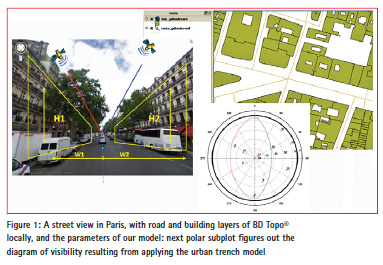 The diagram of visibility, also called mask of visibility, has this rugby ball shape due to the infinite length assumption of the urban trench where one travels. Assuming specular reflection, the LOS/ NLOS boundary obeys to (1):

where B measures the angle difference between the satellite azimuth and the street direction.

A similar equation gives the boundary between NLOS with

1 reflection and NLOS with

2 reflections, and it applies in case high enough buildings are facing each other.

A large data set has been collected in Nantes, Paris and Toulouse in 2012, aggregating 10 hours of observation in the usual traffic, with a GPS receiver typically used in car navigation systems: automotive and highsensitivity GPS Ublox LEA6-T, 5 Hz, mounted on the roof of the vehicle. The ground truth was given in post-processing by a Novatel kinematic receiver coupled with an IXSea Inertial Measurement Unit [7]. We have established that the urban trench modelling, despite its approximation of both the geometry of buildings and the transversal position in streets, classifies properly LOS and NLOS. 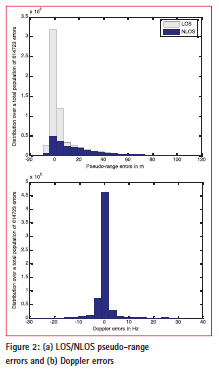 Time series, e.g., have been obtained in Paris, Grands Boulevards, and a histogram of pseudo-range errors is given in Figure 2a. The total number of epochs aggregated is 102335 (approximately 5½ hours at 5 Hz). 7 satellites per epoch are visible in average; note that the highest is used for the receiver clock offset correction, which makes a total population of 614723 errors (5½ hours at 5 Hz for (7-1) satellites). 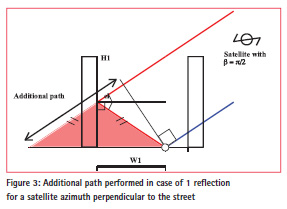 Assuming specular reflections in the environment modelled with urban trenches, the pseudo-range errors can be estimated and the additional distance corrected (Figure 3). This supposes that an approximate position of the receiver is first made, and, as concerns the present approach and experimental results, projected onto the nearest road arc segment in a simple map-matching process. The additional distance obeys to (2):

where el designs the satellite elevation. In the eventuality of 2 consecutive reflections, a similar equation applies. Figure 4, from [6], aggregates all epochs and all test sites (i.e. 10 hours of data). The cumulative 3D error distribution is displayed, for the standard estimator (leastmean squares), for the estimator using LOS satellites only, and for the estimator mixing LOS and NLOS satellites, applying the correction given by the modelled urban trenches.

The LOS only method availability is around 80%, while the standard and NLOS corrected methods reach almost 100%. The median error in 3D has been reduced from 21.7 m down to 9.4 m, i.e. 56% improvement globally. 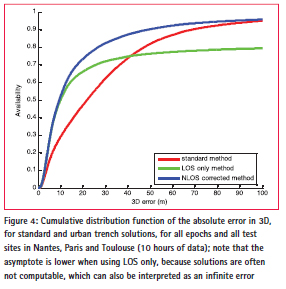 Using a model with simplified geometry (Urban Trench), and approximating the initial position, [6] presented a first deterministic approach, that has been modified into a probabilistic approach [8]. In this approach, are proposed empirical laws modelling the probabilities that signals come LOS or NLOS (with 1 or 2 reflections) depending on the geometry. These laws (Figure 5) depend on deterministic considerations, but they are probabilistic to take into account the random aspects due to difference between the real geometry of the streets and the modelled trenches (gaps between the buildings, differences of heights, etc.).

Every combination of the probabilities is considered in the positioning estimation, which averages 3n solutions, each one being weighted by its own P0*P1*P2 product of probabilities. From this second approach, an urban trench protection level can be computed, which provides an integrity indicator adapted to urban environments. This indicator, computed in 3D, is obtained by multiplying the semimajor axis of the ellipsoid that encompasses the set of 3n solutions by the usual K factor (6.18) read in the chi² statistic table.

Figure 6 shows that the proposed 3D Urban Trench Protection Level (UTPL) outperforms the standard protection level, which does not consider the local sources of multipath. A total duration of approximately 10 hours of tests have been carried out and processed. Misleading Information (MI) occurred a few percents of time in standard, i.e. without urban modelling, whereas the 3D UTPL occurrence of MI is 10 times less: one thousand over the 161 724 epochs where the computation was applicable (epochs with only 4 satellites were not considered). 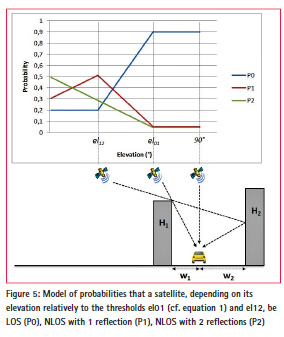 This communication gives results in urban environments not only in terms of accuracy improvement, but also in terms of integrity. Full scale experiment, in Nantes, Paris and Toulouse, for a total duration of 10 hours, have been carried out, which makes a data set large enough to claim for an integrity risk of the order of magnitude of 10-3 with a 10% confidence. The 3D modelling is simple and compatible with today’s embedded digital maps. Additional tests and investigations to optimize the Urban Trench probabilistic method are ongoing.

The authors would like to thank the Ministry responsible for transport in France, DGITM (general directorate for infrastructure, transport and the sea), which funded this research work in the frame of the project named Inturb.