Into the orbit: Latest Indian RS satellite and a ‘dream’ of students

The 694 kg CARTOSAT-2B is the seventeenth remote sensing satellite of India. Data from the satellite will find applications in cartography at cadastral level, urban and rural infrastructure development and management, as well as Land Information System (LIS) and Geographical Information System (GIS).

CARTOSAT-2B carries a state-of-the-art panchromatic camera (PAN) whose imagery will have a spatial resolution of 0.8 meter. The camera has a swath of 9.6 km. The highly agile CARTOSAT- 2B is steerable up to ± 26 degrees along as well as across the direction of its movement to facilitate imaging of any area more frequently. The satellite also carries a Solid State Recorder with a capacity of 64 Giga Bits to store the images taken by its camera.

The satellite’s health will be continuously monitored from the Spacecraft Control Centre at Bangalore with the help of ISTRAC network of ground stations at Bangalore, Lucknow, Mauritius, Biak in Indonesia, Svalbard in Norway and Troll in Antarctica.

The initial phase of operation of the satellite has been successfully completed. The camera has been switched on, and images of high quality are being received.

STUDSAT (Student Satellite) is a unique satellite technology endeavor undertaken by under-graduate students from seven different Academic Institutions in India under the guidance of the Indian Space Research Organization (ISRO). STUDSAT is the first Pico- Satellite being launched by India.

The idea for the STUDSAT project crystallized during the International Astronautical Congress, 2007, between four students from different academic institutions, from Hyderabad and Bengaluru, after their epochal interaction with the Project Director of Small Satellites, ISRO Satellite Centre.

The initial student team completed the conceptual design of the satellite. They then approached their institutions to persuade them to contribute funds for the realization of the ambitious project. The institutions wholeheartedly supported the team.

The team and institutions then approached ISRO for a Preliminary Review of the Student Satellite project. After a detailed review, ISRO approved the project. Subsequently, the team grew to around 45 students from ten different academic institutions. Of the ten participant colleges, seven formed a consortium in order to sponsor the project. An internal MoU was signed between the colleges, and they chose Nitte Meenakshi Institute of Technology, Bengaluru as their representative to sign the official MoU with ISRO on their behalf

STUDSAT has the objective of promoting space technology in educational institutions and encourage research and development in miniaturized satellites, establish a communication link between the satellite and ground station, capture the image of earth with a resolution of 90 meters and transmit the payload and telemetry data to the earth station. 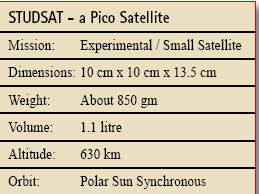 A Ground Station has been established in Nitte Meenakshi Institute of Technology (NMIT), Bengaluru to communicate with STUDSAT. On 12 July 2010 the STUDSAT beacon signal was received at the tracking station in NMIT. It was also heard by HAMs all over Bangalore. On 15 July 2010 NASTRAC received the Telemetry Data with packets separated and confirmed the satellite is in mission mode.

The satellite has thus completed the beacon mode of communication and has entered the mission mode, where in it will transmit encrypted data at 437.505 MHz.