Why do people participate in standardization of GI?

This paper is based on results presented in Lundsten and Paasch (2017; 2018) and is in part a re-publication of Lundsten and Paasch (2018). The paper explores the motives for participation in formal standardization processes for geographic information in Sweden. Accepted standards are no trade secrets, but are available for everyone, even though participation in a formal standardization process usually requires considerable resources (Riillo, 2013). The main incentive is therefore oftentimes not to make money on a trade secret, but to gain knowledge by sharing technical and strategic competence and do expanding networks (Blind and Mangelsdorf, 2016; Riillo, 2013). In turn, participation in standardization processes potentially leads to technical and strategic advantages for organizations. Teams need motivated members to achieve technical and strategic progress. According to the authors’ literature search, there are no previous studies of motivators for individuals for being engaged in standardization processes in geographic information. Together with Lundsten and Paasch (2017), this paper will hopefully contribute to this field.

The strategy includes communicating the importance of the use of standards for achievement of an effective infrastructure for e.g. data exchange, digitization of public administration, and more effective social planning processes. According to public inquiries standards are essential for the nation’s “invisible infrastructure” (Swedish government, 2007). As reported by Lantmäteriet, the Swedish mapping, cadastral and land registration authority, there is presently a focus on digitalization of geographic information (Klintborg and Drewniak, 2018).

During the study in Lundsten and Paasch (2017), SIS had nine technical committees, TCs, covering different topics of geodata standardization, both nationally and internationally (see Lundsten and Paasch (2017; 2018)). Members of the TCś were selected for interviews. The researchers based the interviews on open-ended questions giving the interviewees opportunities to describe the work in the projects teams from a personal perspective. The interviewees were asked to describe the work in the TCs and their personal meaningful goals related to the work.

The interviews were transcribed and then analyzed. The Meaning Constitution Analysis, MCA method (Sages and Lundsten, 2004) was used for the analyses. Eighteen, present and former, TC-members were interviewed, out of 23 who were asked to participate in the study. The TCs consisted of 81 members in total. 43 private and public organizations were represented in the TCs.

Bent and Freathy (1997) showed that personal interactions between suppliers, in the independent retail sector and their customers had positive effects on the suppliers’ motivation. Interactions with clients facilitates the supplier’s awareness of the customers’ needs, implying that there is a clear direction for the suppliers. The suppliers know when they have achieved essential goals. Such interactions should have a positive effect on motivation,, in cases where the satisfaction of others needs is a personal meaningful goal. Correspondingly, it is possible that relations between developers of standards and stakeholders affect the developers’ motivation.

According to Nelson and Winter (1982) an organization basically consists of routines; organizations do not embrace routines – they are routines. The set of routines constituting an organization are linked together because there are room for them, not necessarily because there is an intentional reason for keeping them (Stanczyk-Hugiet, 2014). Standardization implies routinization and, by that, standardization processes create routines. Additionally, standards clarify the organizational routines. Regarding geodata, standards clarify the routines for processing of geographic information for each employee. Clarified routines facilitates perceptions of the organizational activity as personally meaningful for the employees (cf. Leontiev, 1978). That is, employees experience a relationship between the routines and their personal meaningful goals, implying that the routines make sense for them. People involved in developing standards should therefore have a higher motivation if they interact with people affected by the standards in their daily work.

Among the organizations, there were five different incentives for participation in standardization of geodata: 1) development of standards for structuring geographic information, 2) to get involved in technical development, 3) to prevent waste of resources, 4) to adapt the organization to the national context, 5) to make information transmission possible or more effective. These incentives could either correspond or contradict the organizational routines. Organizations may adapt to standards of geodata, but simultaneously there are routines unrelated to geodata per se. Private and actors oftentimes exchange technical expertise to mobilization of state power with public actors, and vice versa (Abbott and Snidal, 2001, p. 363). 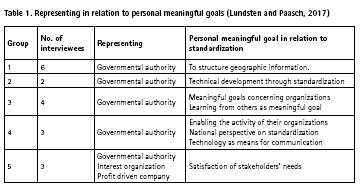 All interviewed members described the work in the technical committees as demanding, but still stimulating. They were motivated to meet the challenges in developing standards. However, their personal meaningful goals differed.

For six interviewees the situation in the committees was confusing. The members in each committee represented different organizations, implying they had different perspectives. During the projects, developing a structure of geographic information became highly challenging. Data needed to be structured from different perspectives to make it useful for the stakeholders. Simultaneously, the differing perspectives were oftentimes hard to synthesize. In order to make the standardization work proceed, the ways of communicating between the team members needed to be clarified, as well as the purpose of the standardization projects. The clarification of communication was a personal meaningful goal, per se.

Four interviewees experienced that their organizations did not prioritize the standardization projects. Consequently, they had to minimize their time spent on standardization projects. In order to contribute in the Technical committees they had to be efficient and minimize waste of time and additional resources. Their personal meaningful goals differed, but all of them concerned the interests of their organizations, for instance, knowledge development beneficial for the organization.

The results presented in Lundsten and Paasch (2017; 2018) showed that a major motive for organizations and individuals to participate in formal standardization is to contribute to the development of standards for the description and exchange of geographic information. Interviewees which had frequent interactions with stakeholders experienced the standardization project as a personal meaningful goal. This finding i in line with research implying that personal interactions with clients facilitate motivation (cf. Bent and Freathy, 1997).

This observation seems to contradict the views expressed in e.g. the Swedish national geodata strategy that standards are an important part of the geographic information infrastructure and the effort of financing access for users to standards. There is a generally wish among the stakeholders that it is important that standards are being used.

Participation in the formal standardization process is voluntary and in line with the Swedish principles of governmental autonomy. Swedish governmental agencies therefore hold a considerable high level of autonomy due to a century’s old and constitutionally enshrined principle and are independently managed under performance management by the government (Hall, Nilsson and Löfgren, 2011). This autonomy means that agencies to a large extent can make their own decisions concerning if, and how they want to be participate in national and international standardization (Swedish government, 2007, p. 123).

The study presented here was published in Lundsten and Paasch (2017) and investigated individual motives for participation in formal standardization of geographic information. Personal interviews were conducted with chairmen and members of Technical Committees at the Swedish Standards Institute.

The majority of the interviewees expressed a strong personal motivation in standardization of geographic data and only a minority expressed lack of motivation for participating in standardization projects per se. The interviewees’ motivation corresponded to the interest of their organizations. It is however not sufficient for the participating organizations just to support the financial obligations of being part of a technical committee by paying participation fees, etc. If the individual participants´ time is not allocated for the specific purpose to participate in the technical committee it may lead to lack of motivation and poor working conditions. This is due to the feeling of not being able to participate in an optimal way and that the work is regarded as less important than other work activities closer to the routines in the employees’ organization. This view has even been expressed by some of the interviewees.