Water quality estimate in the Isahaya Bay with UAV

Water gates in the Isahaya bay were closed because of reclamation construction which started in 1989, and water conversion became a very serious problem. Then, the authors have carried out remote sensing research with a few centimeters of resolution and 6 bands. We took pictures by UAV and a camera on the ground with two infrared filters from May to August in 2016. The research had the following four processes. First process is acquiring picture data. The data of RGB was acquired by UAV directly, and we acquired the ocean temperature data from Japan Coast Guard. Second, we performed multivariable analysis. Multivariable analysis was applied for water quality in the Isahaya bay and picture data, and regression lines of water quality were obtained by calculating six bands. Third, using these regression water distributions were mapped by PhotoScan (three-dimensional structure software) each water quality. As a result, UAV was available for water quality estimate. Correlations among the water quality were very high. In this research, mapping water quality in the Isahaya bay was successful for environmental management using UAV. The advantage of mapping was visualization of numerical analysis for water quality. 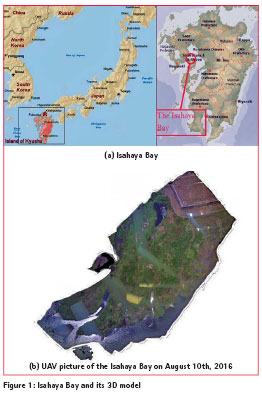 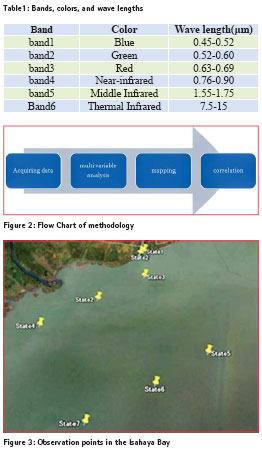 The authors performed the field study on May 7 and August 10 in 2016 in the Isahaya bay, using UAV (Phantom3 and Phantom4) to take photographs from the sky and a digital camera on the ground. Each photograph has GPS information: latitudes, longitudes, and altitudes. The authors were able to construct the three-dimensional form by PhotoScan. Also, the sea temperature data were acquired from MODIS.

On May 7, 2016, water was sampled with GPS at 7 observation points as shown in Figure 3. Water quality index were chlorophyll-a, chlorophyll-fl u, conductivity, EC25, turbidity, DO, DO, water temperatures, and salt content.

The multivariable analysis was applied for water quality data using bands1, 2, and 3 to get regression equations. Water quality was estimated by these equations, and then, the water quality indexes are shown in Table 2. 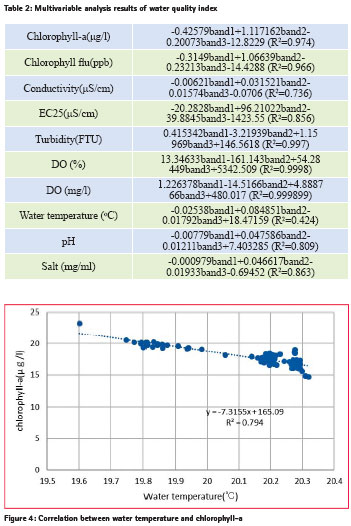 Mapping of the water quality indexes was made from the expressions of multivariable analysis using PhotoScan, which estimates water quality from RGB with functions.

The correlation among water quality indexes were calculated at the observation station1, and then the correlation became high or low.

The authors appreciate Akihide Tada and Gaito Yamada greatly for technical assistance with the experiments.