With the theme “GNSS – New Challenges” the Munich Satellite Navigation Summit returned ‚reloaded‘ after a one-year break. Once again the organizing Institute of Space Technology and Space Applications (ISTA) of the Universitaet der Bundeswehr Muenchen invited experts from all over the world to discuss the latest developments and challenges in the field of GNSS.

The conference started off on March 25, 2014 with the ceremonial opening in the historical Court Church of All Saints. About 300 participants from 25 nations received a warm welcome by the Bavarian State Minister of Economic Affairs and Media, Energy and Technology, Ilse Aigner as well as Prof. Dr. Merith Niehuss, president of the Universitaet der Bundeswehr Muenchen, and Prof. Dr. Bernd Eissfeller, chairman of the conference. Ilse Aigner valued Bavaria as the heart of aerospace industry in Germany and said that approximately 65.000 people are working in this sector in Bavaria. In particular young engineers and entrepreneurs are encouraged by fundings.

The opening plenary discussion was all about Integrated Applications and featured high-ranking representatives from the European Commission, ESA, DLR, European GNSS Agency (GSA), Airbus Defence & Space, OHB and Telespazio. Matthias Petschke, Director of EU Satellite Navigation Programmes at the European Commission, pointed out that applications lead to more business interactions and show that earth observation and satellite navigation are moving closer together. Jean- Jacques Dordain, Director General at ESA, mentioned that EGNOS services are now fully available and that four IOV satellites are already in orbit. Overall, the discussion showed that Integrated Applications and the promotion of space technology are essential and that it is important to focus on the users and their needs. 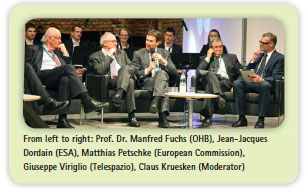 The technical program on the following two conference days offered a broad variety of interesting sessions, starting with an overview on the global, regional and augmentation systems. One of the highlights was a special session on QZSS that showed that the development of the Japanese system is moving forward quickly. Related to the overall theme, one of the major challenges in satellite navigation nowadays, the explosive topic of the malicious or unintentional interference with GNSS and other navigation signals was discussed during a session that was chaired by Prof. Vidal Ashkenazi, Chief Executive of the U.K.- based Nottingham Scientific Ltd. He asked the panel members about what is being proposed to be done about detecting and countering interference, such as jamming and spoofing. David Turner, Deputy Director at the Office of Space and Advanced Technology at the U.S. Department of State, explained that they are working under a policy framework in order to support international acitivities regarding the detection and mitigation of interferences. Dominic Hayes, Policy Advisor for GNSS Signals and Frequencies at the European Commission, added that jammers are illegal in Europe and that each member state is responsible that jammer devices are not available on the market. Regarding the malicious interference and related penalties, he said it is important to educate the users with regard to the impact of jammers. Satoshi Kogure, Mission Manager at the Japan Aerospace Exploration Exploration Agency (JAXA), agreed that most of the users are not aware of the harm that Personal Privacy Devices (PPDs) can cause.

Besides the technical sessions the conference was again completed by an exhibition with 16 companies and institutions that presented their business and products during the three conference days.

The Munich Satellite Navigation Summit 2015 will take place on March 24 – 26, 2015. Up-to-date information can be found on www.munichsatellite- navigation-summit.org