The Challenges for Resilient PNT in 2020

A year in which disruption to GNSS reached new levels

In 2019 we saw massive worldwide disruption from GNSS jamming, spoofing and other vulnerabilities. The scale of the disruptions we observed was unprecedented and even though to some of us there had been many indicators that this sort of disruption to systems and devices dependent on precise positioning and timing data from space based PNT was becoming very likely many of the events still took much of the GNSS user community by surprise.

If anyone still doubts the seriousness of the risks presented by GPS and GNSS vulnerabilities, the stark reality of the events we experienced 2019 should put those doubts to rest.

Across the world we’ve seen flights grounded, shipping disrupted, drones lost, weather balloons downed, and vehicles of all kinds mysteriously lose their bearings. The causes range from state-sponsored electronic warfare and organised criminal activity to technical issues with the satellite systems and the receivers that rely on their signals.

The growing complexity of PNT systems in which GNSS is used as only one of the sensor inputs to a navigation or timing system means that the need to evaluate and test systems in real world situations has become greater than ever. We have seen impacts of GNSS jamming disrupting commercial aviation systems – where GNSS is just one of the sensors used – but as some of the reported occurrences show very clearly, where GNSS measurements disagree with measurements from other sensors, the consequence aren’t always easily predictable or easy to assess. GNSS data may be shared with several onboard systems including ADS-B for collision avoidance and Enhanced ground proximity warning systems (GPS data used to provide terrain database information).

In October, the International Civil Aviation Organization (ICAO) for the first time identified GNSS disruption as an ‘urgent safety priority’, responding to concerns raised by a host of national and regional aviation bodies.

A horrifying near-miss incident at Friedman Memorial Airport in Hailey, Idaho, was one of the catalysts for ICAO’s action. A write-up of the incident in NASA’s June Callback newsletter notes that there was ‘widespread jamming’ and ‘an abundance of smoke’ in the area as ‘Aircraft X’ approached the airport. The pilot had reported a GPS outage prior to its descent, but said the problems had cleared up, so the local controller cleared the aircraft for a GPS-based approach.

Shortly thereafter, a controller some 250 miles away in Salt Lake City happened to notice that Aircraft X was straying off course. What’s more, the plane was at 10,700 feet altitude and nearing a 10,900 feet mountain.

Thinking quickly, the controller contacted the local control tower in Hailey, which directed the aircraft back onto a safe flight path. The report concludes that “Had [the Radar Controller] not noticed, […] the flight crew and the passengers would be dead, I have no doubt”.

Pilot reports of GPS disruption are on the increase

This was an isolated incident, but data shows that GNSS interference poses a rapidly-growing threat to aviation. I spent some time in 2019 analysing pilot reports related to GPS that were filed with NASA’s Aviation Safety Reporting System (ASRS) every year since 1997. I reviewed each of the incidents looking for events which where GPS interference was a probable factor. This is most likely a very conservative assessment – but the overall trend in events is striking and shows an unwanted increase in potentially disruptive incidents. The evidence is clear.

GPS Spoofing incidents on the rise

As well as the ongoing problems in the Black Sea during 2019, for several months, commercial ships on the Huangpu River in Shanghai have been intermittently broadcasting inaccurate data about their location and movements. Some ships appear to traverse the river very quickly from side to side, while others have been creating elegant ‘crop circles’ of position data that bear no resemblance to the ships’ actual locations.

Another spoofing incident reportedly occurred at the Geneva Motor Show in March 2019, and is said to have impacted the in-vehicle navigation systems of several vehicles on the exhibition floor, including models from a number of high profile vehicle manufacturers.

According to the automotive blog Jalopnik, the vehicles’ navigation systems all suddenly started displaying the year as 2036, and their location as Buckingham, England. In some cases, even manual attempts to reset the date and location failed.

Integrity is becoming even more important than pure GNSS performance

As GNSS signals are used in ever more applications, the last few years have seen the pursuit of accuracy and precision above all else. Multi-sensor positioning systems and precision timing receivers have made subcentimetre positioning and nanosecond-level timing a reality – fuelling advances in autonomous vehicles, smart infrastructure and next-generation mobile networks.

Given the scale of GNSS interference and spoofing events we’ve observed worldwide in 2019 , the integrity (trustworthiness) of GNSS is becoming even more important to users than the fundamental measures of GNSS receiver performance. Without it, systems and devices of all kinds will continue to be compromised by escalating levels of interference that show no sign of stopping. 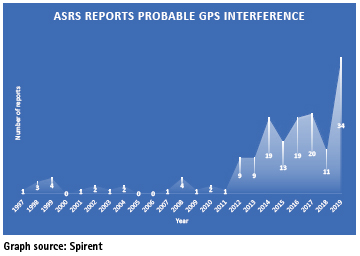 As many applications move towards multi-sensor solutions for timing and navigation – e.g., autonomous ground vehicles, drones, autonomous shipping , aviation systems in both commercial and military domains, the overall test landscape is becoming much more complicated – testing a GNSS sensor in isolation will not be sufficient (although thorough testing of the GNSS sensor is still necessary)- Hardware in the Loop testing of systems and sensors is now a vital additional test component. Some of the main components of a programme to develop Assured PNT solutions for specific application domains should include:-

▪ Evaluating the performance and resilience of PNT dependent systems and devices

▪ Bespoke testing carried out in fully equipped laboratories or on-site

▪ Often overlooked when considering test challenges – especially those associated with system resilience and integrity, is the need for open and responsible sharing of threat intelligence. This is something that’s definitely needed in the commercial PNT sector. Initiatives such as the US Coastguard’s GPS Problem Reports Status https://navcen.uscg. gov/?Do=GPSReportStatus and NASA’s ASRS reporting system https://asrs.arc. nasa.gov/ show how valuable this sharing of information can be and it will help lead to community driven support improving security within the GNSS industry.

Stay up to date with GNSS vulnerabilities

Threats to GPS/GNSS are evolving all the time. To stay up to date with the latest news, events and incidents, join the growing community in the GNSS Vulnerabilities LinkedIn Group.