For intelligent transportation systems the information of any vehicle location in an absolute geodetic reference frame is essential. These locations can be estimated best on the basis of global navigation satellite systems combined with auxiliary sensors. A GNSS receiver serves as the major component. Since more and more GNSS are available or will be built up in the near future, availability and accuracy will increase. Therefore, the reliable determination of the receiver quality is currently under research at multiple institutions e.g. [1]. Especially for GNSS system manufacturers and system integrators, it is essential to determine which receiver is the most suitable for their specific applications. Thereby, the field performance evaluation is mostly performed by static tests or by kinematic tests driving randomly through an urban environment. But the gathered data is only a snapshot of the receiver performance and has a lack of statistic significance.

Measurements have shown that GNSS receivers of the same type with identical software versions and software settings provide different location data [2], even when operated with the same antenna input signals. That phenomenon has multiple reasons: maintaining a digital phase lock loop is a very stochastic process especially in dynamic scenarios, receiver clocks are strongly temperature dependent and some parameters of internal filters have an internal memory effect [3]. Two examples are depicted in Figure 1. 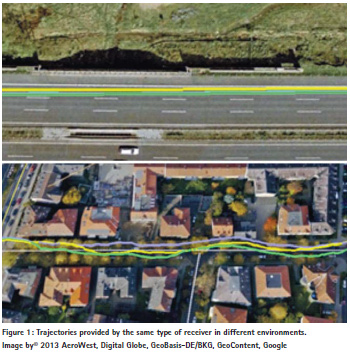 The images present different trajectories of three GNSS receivers of the same type and same software versions, provided with the same input signals. It is visible that on the highway scenario (above) the distances between the trajectories are much smaller than in the urban scenario (below). This leads to the result that for a liable performance assessment it is not sufficient to execute simply one or few tests to estimate the performance parameters reliably. To deal with this situation, a new parameter has to be defined to quantify the repeatability characteristic.

Until today, there are mainly two options for testing the GNSS receiver and antenna combination on their stochastic behaviour. They can either be tested in parallel resulting in a large amount of receivers or one receiver can be provided with the same signals (recorded by a record and replay system) repeatedly. To provide a receiver with real signals, they have to be recorded during a test run and afterwards replayed in the laboratory. That operation can be performed with signal record and playback systems through the originally installed antenna. These systems work in the way that active GNSS signals are filtered, amplified, down converted and digitized. Later, in the laboratory the data can be replayed by reversing the process. In contrast to field tests, the financial cost of test repetitions is low. Hence, such a system is used in this paper to investigate the stochastic behaviour.

with sij being the variance of the performance parameter j of replay i, nij the amount of samples in replay i of performance parameter j, and p the total amount of replays. For reasons of simplicity, the index for the different scenarios is not included in eq. 1. Before calculating the repeatability, the measurement samples have to be investigated in terms of outliers. One possible test advised by ISO 5725 [5] is the Grubbs’ test for outliers. At the beginning of the test, the mean location deviation: 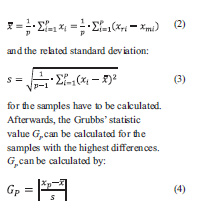 with xi being the measurement value of a test, P the amount of measurement samples, the mean value of all measurements and s the standard deviation of all measurements. This is followed by the comparison of GP and the critical value for Grubbs’ test α , calculated from the student-t distribution or extracted from tables. If GP > α , an outlier is detected, the value has to be excluded from the sample and the test has to be redone with the newly calculated values. If GP < α , no outlier is detected and the repeatability standard deviation can be calculated.

In this equation, SE stands for the standard error of the sample mean and z the quantile of the distribution. For this case a normal distribution is assumed and a 95% confidence is chosen. Hence, for the following calculation 1.96 is used for z. The standard mean error can be calculated for a given standard deviation s and the total number of samples for all replays n by:

To quantify the repeatability standard deviation, both real test data and replayed test data are required. During testing, the antenna was mounted on top of the test vehicle. From there signals were transmitted via a 0 dB antenna splitter to a reference measurement system, the GNSS receivers and the record and replay system. The reference measurement system was an INS system manufactured by OxTS provided with real time correction data from a certified local reference data provider. The reference locations of the reference system are known to be accurate to cm level. Hence, it can be regarded as the true value for this type of application. The systems under test were provided with the same signals at all times. During the test, measurements were performed with two Ublox Neo- 6P GNSS receivers. All receivers were configured for the automotive application and to use SBAS data. To collect the necessary data for calculating the repeatability standard deviation, a record and replay system Spirent GSS6425 was carried along. It supports 3 frequencies, enabling the recording of GPS, GLONASS and SBAS data. Whereby, GLONASS data was not analysed.

To analyse the impact of the environment on the repeatability standard deviation, different scenarios have been classified in terms of the type of street, the height of surrounding buildings and their distances to the streets, the occurrence of highly reflecting materials and possible signal degradation elements such as trees. The urban scenario with trees comprises for example high buildings close to the street with trees growing between buildings and the street.

The results contain the evaluation of both i) the real measurement (August 2015) and ii) the replayed measurement data. To calculate the accuracy for both types of data, the coordinates provided by the reference measurement system were used. 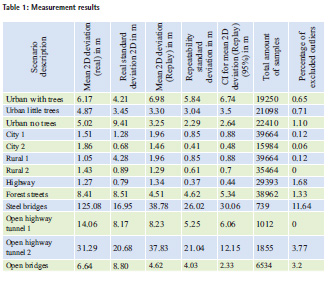 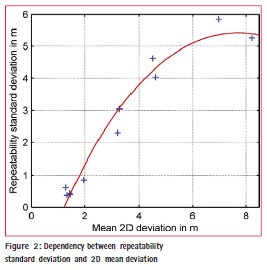 At first glance the mean deviation between the true measurement and the total mean of the replayed signals exhibits strong variations. This is strongly depending on the environment. It can be seen that open environments such as ‘Highway’, ‘City 1’ or ‘Rural 2’ differ in the range of decimetres. In contrast, for more sophisticated environments the mean location deviations differ in the range of meters (urban scenarios) to multiple meters (forest, steel bridge)

For some scenarios, the total number of outliers is quite high, but only limited strugglers were identified. Most of the outliers have their origin in a replay performed within the moving vehicle. It is assumed that due to vibrations of the vehicle the internal clock of the replay system was disturbed. The exemplary Grubbs statistic G is depicted in Figure 3. In this figure, G values of repetition 3 exceeds the α values clearly for a certain time.

The behaviour of larger location deviations for that replay is visible when the trajectories of each trip are plotted in Figure 4. It can be seen that repetition 3 (large position deviation at the beginning) does not follow the other repetitions. Even though one imperfect replay was identified, the maximum amount criterion of outliers according to JRC 51300 [6] (exclusion of maximum 2/9 of the samples) is still fulfilled.

In this paper, the repeatability standard deviation has been defined and measurements have been performed.

With the conducted measurements it could be proved that it is not sufficient to simply go out into the field, drive around and acquire measurement data. Within the measurement results, strong variations were even visible for the mean location deviation. Furthermore, it could be identified that the measurement environment has a major impact on repeatability.

Depending on the system under test and the environment, the repeatability standard deviation varies strongly.

Hence, to achieve reliable results and to consider the stochastic behaviour, multiple measurements with the same input signals have to be performed. That can either be done by testing different systems in parallel or by using a record and playback system. For the measurement results presented, the confidence intervals were calculated. By increasing the number of replays, the confidence range could even be reduced. One open question is the impact of the record and playback system quality on the measurement results. This is currently under investigation.

This research was supported by the International Science & Technology Cooperation Program of China (2014DFA80260). This paper was already presented at the European Navigation Conference 2016 in Helsinki.

[1] D. Lu and E. Schnieder, Performance Evaluation of GNSS for Train Localization. In: IEEE Transactions on Intelligent Transportation Systems, No. 90, 2014.