GIOVE-A is a first Galileo test satellite launched on December 28, 2005. The satellite payload transmits two frequency signals at L1+E5 or L1+E6. There are 13 world wide located Galileo Experimental Sensor Stations (GESS) to track and monitor the GIOVE-A signals. High accuracy of GIOVE-A ephemeris or orbit, however, is essential for navigation applications. The paper presents a new method to deal with the precise orbit determination of GIOVE-A satellite using pure carrier phase measurements and the initial results [1].

In order to use DDIC, some problems shall be solved in advance, first of all the synchronization of GIOVE-A satellite measurements with GPS time reference, secondly the different time reference bias between GIOVE-A and GPS satellites, thirdly the different system bias between GPS and GIOVE-A satellites due to different coordinate systems and different system configuration and finally the weight normalization of GIOVE-A and GPS measurements for unified processing.

The time reference bias can be solved using navigation solution (or called PVT) with time synchronization with GPS time system, i.e. all the GIOVE-A measurements are corrected with GPS time parameters from the navigation solution. This step implied the synchronization of Galileo time with GPS time scale. The system bias is also solved at the navigation step, but later after the first solution of the orbit determination. After the time synchronization, the weight normalization can be taken place. The following factors are considered for the normalization, satellite orbit characteristics (altitude and movement, etc.) and measurement accuracy. Then GIOVE-A orbit is determined using double differences of carrier phase measurements between GPS/Galileo satellites. After the GIOVE-A orbit is determined, the GIOVE-A satellite clock corrections are solved separately using pseudorange measurements.

Galileo is a satellite radio navigation system initiative launched by the European Union and the European Space Agency. Galileo will consist of a constellation of 30 satellites and ground stations providing position information to users.

Two experimental satellites were launched in 2005 and 2008 as part of the Galileo System Test Bed V2: GIOVE-A (Galileo In-Orbit Validation Element) and GIOVE-B (formerly GSTB-V2/B). The objectives of this mission are:

High accuracy of Galileo ephemeris or orbit is a key for   successful application of Galileo satellite system for navigation. There are some reports [5],[6],[7],[8] about GIOVE-A orbit determination using code or carrier-phase smoothed code measurements. It is well known that the highest accuracy of satellite orbit can be achieved using double differences of carrier-phase measurements. For the GIOVE-A satellite, however, it is difficult to form such double differences as not enough Galileo satellites are in space. Therefore in this paper, a new innovative approach to form such double differences of carrier-phase measurements between a GIOVE-A satellite and GPS satellites is presented. The initial results using this method to determine a GIOVE-A satellite orbit are also presented. This method is called Double Differences of Carrier Phase Measurements Inter Constellations of GPS/Galileo (DDIC) [1].

The new method is developed and implemented based on the Bernese GPS software version 5.0 further reworked for the GalTeC  REF (Reference) component [4].

GalTeC is a development project under contract with the German Aerospace Center DLR and supported by the Federal Ministry of Economics and Technology (BMWi).

The application of GalTeC [3],[4] is to provide value added services related to the provision of GNSS satellite-only services. It provides services linked to GPS, GLONASS, EGNOS and Galileo satellite systems. The services comprise offline functional and performance analysis of the GNSS systems. GalTeC in addition offers prediction capability for service level and service volume assessment. 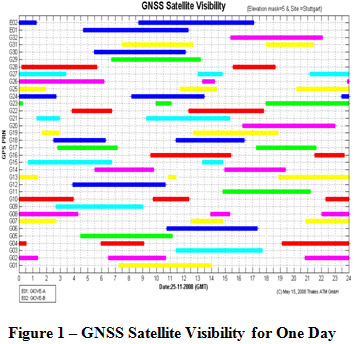 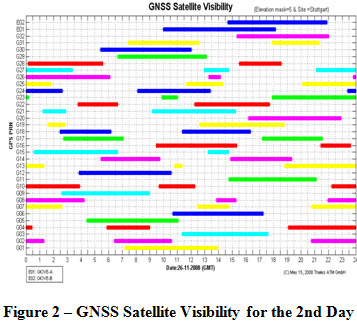 Reception Status of Giove A and B

In the table above the reception status of GIOVE-A and B for the months October and November 2008 are shown. A ‘1’ means that there was a reception of GIOVE signals or the received data are valid. A ‘0.5’ stands for partly correct reception (e.g. half a day) and a ‘0’ means no or no valid data. Within this time period on every day signals were received from the two satellites (columns: Reception). At the beginning of October no valid ephemeris (Eph) were sent from both GIOVE satellites (i.e. all data were zero or not reasonable). In the last two columns the received pseudoranges (PR) are evaluated. With the exception of 1.5 days GIOVE-A PRs are in the expected limits (see Figure 1 and 2). GIOVE-B PRs are valid since October 22nd.  The two red marked days mean that there was received a set of ephemeris, but without clock correction parameters (i.e. af0, af1 and af2 were zero). At the orange marked days the pseudoranges are partly out of the expected range limits (>40000 km for Giove B, < 18000 km for Giove A).

An overview of the received ranging signals is depicted in the following figures. The signals are received on 22nd November 2008 (DoY 327). 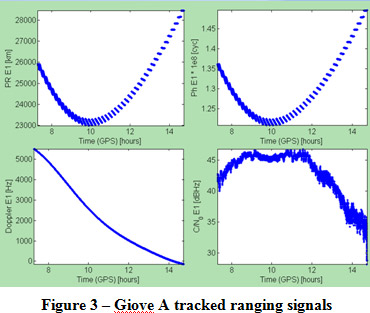 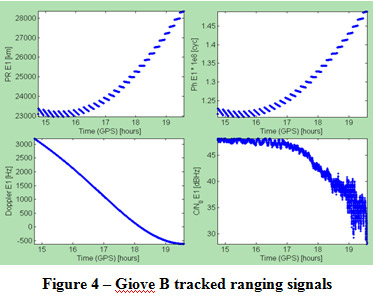 Due to the receiver setting a clock jump appears if the receiver clock error exceeds 500 µs. This leads to the jumps in the PR and carrier phase plots. The signal is tracked once the C/N0 is bigger than 28 dBHz.

With the received ephemeris the orbits of GIOVE-A and B were calculated and compared with a solution derived from TLE (Two Line Elements). The differences in the norm of the position vectors reached from 40-100 km. The differences for GPS satellites are in a similar range. For illustration an elevation plot for GIOVE-A for DoY 320 (15th November 2008) is shown. This plot underlines that the received ephemeris are usable for orbit determination and thus for navigation purposes.

After three days the GIOVE-A satellite has covered a distance of about 5.1 orbits (revolution time of approximate 14 h 05 m). The start points are marked with red crosses and the final points with black crosses. For comparison also a GPS track (from PRN6) is shown in the  Figure 6. After one day the GPS PRN6 is almost at the
same position as at the beginning of the track (revolution time of 11 h 58 m). 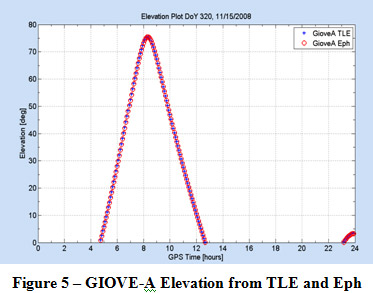 In order to use DDIC (Double Differences of Carrier Phase Measurements Inter Constellations of GPS/Galileo), some problems shall be solved in advance, first of all the synchronization of GIOVE-A satellite measurements with the GPS time reference; secondly the determination of different time reference biases between GIOVE-A and GPS satellites; thirdly the determination of different system biases between GPS and GIOVE-A satellites due to different coordinate systems and different system configuration and finally the weight normalization of GIOVE-A and GPS measurements for unified processing.

The synchronization of GIOVE-A satellite measurements with the GPS time reference is implemented  as follows.

Then the GIOVE-A satellite can be treated as another GPS satellite for further processing. The next steps for data processing are to form single differences of measurements and to detect and repair cycle slips in the measurements.

In order to perform orbit determination of GNSS satellites or orbit improvement, the so-called initial orbit of GIOVE-A and GPS satellites is necessary. The initial GIOVE-A orbit can be obtained from the NORAD TLE or GIOVE-A broadcast ephemeris if the navigation ephemeris from GIOVE-A is valid or a predicted GIOVE-A orbit e.g. from ESTEC. The initial GPS orbit can be easily generated from the GPS broadcast ephemeris.

is the single difference between stations k and l for one of the GPS satellites or for the GIOVE-A satellite. The superscript indicates the satellite types.

is determined by GIOVE-A carrier frequencies.

These figures show that no significant differences between DD and DDIC are found. The residuals of DD and DDIC are both at ± 6 mm levels. It shows that the DDIC method is correct and able to be used for orbit determination of the GIOVE-A satellite with GPS satellites together.

In order to further demonstrate the accuracy of daily orbit determination using the DDIC method, the results of precise GPS satellite orbits determined with the GIOVE-A satellite together are compared with IGS final orbits, the accuracy is evaluated as follows:

are coordinates of a satellite in the WGS 84 coordinate system for a time epoch. The superscript ddic means the results of the orbit determination using DDIC method and igs the IGS final orbit.

are shown in the Figure 10. In the figure the accuracy of the GPS orbit determination on a daily basis can achieve a level of around ±0.5 m. As the GIOVE-A satellite orbit can not be directly compared with a corresponding IGS orbit, its accuracy between ±0.2 m and ±0.8 m levels can be indirectly deduced from the shown GPS results in Figure 10 because no significant differences of residuals are found between DD and DDIC (see Figure 8 and Figure 9).

The Figure 12 shows the PVT results solved with the GPS broadcast ephemeris only. Here the RMSs are worse and reach values of up to ±5 m.