Land registration and the challenge in Indonesia

The significant number of unregistered parcels indicates that a more reliable and accurate method should be proposed to speed up the registration process. Up to the year 2016, no less than 41 million parcels have been registered in Indonesia (see Figure 1). However, these numbers hold 187 of BIG’ CORS GNSS and more than 70 of BPN’ CORS GNSS. The Sweden National CORS GNSS, for example, demonstrated an excelent applicability of broad applications, especially the RTK (Real-Time Kinematic) service [3]. The TUSAGA-Aktif, a CORS GNSS network in Turkey, is also used massively to increase the number of registered parcels [4]. 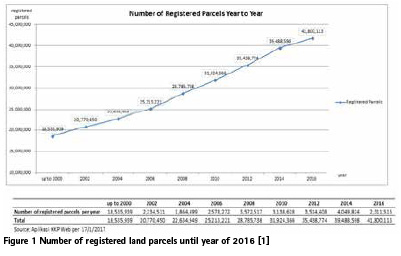 GNSS measurement is not coming without flaw. Aside from orbit and clock biases, the accuracy of relative GNSS positioning depends on the atmospheric bias. The atmospheric bias is worsening the GNSS accuracy with a greater baseline, especially in the vertical component. Atmospheric bias may reduce the accuracy of the vertical component up to several decimeters in RTK GNSS positioning [5]. To take the advantage of the CORS GNSS network, the positioning of NRTK (Network Real-Time Kinematic) method can be used. Utilizing at least three CORS GNSS, NRTK modeled an error surface in an area constrained by these three CORS GNSS. As the rover moves away from the reference station, a huge bias will occur. The errors interpolated from the error surface can minimize the bias significantly.

Although it seems promising to use the CORS GNSS and NRTK positioning method, , The implementation may face several technical challenges that need to be taken into consideration. In addition, several challenges need to be considered in using these methods such as financial sharing agreement and human resource management. The relatively dense network of CORS GNSS is only available for two main islands in Indonesia, namely Java and Sumatra (see Figure 2 and Figure 3). The CORS GNSS sites in other main islands are separated from each other with a greater distance, which makes it untuitable for NRTK method. Establishing a temporary tie point near the survey area will also not be a great solution considering the time and financial efficiency.

We need a simple yet reliable alternative solution to overcome the sparely distribution of CORS GNSS. Fortunately, a modified LAMBDA method [8] ensures the improvement of reliability of longrange single baseline RTK. This method uses an extended functional model to implement the atmospheric bias correction and a precise orbit correction from the WADGPS (Wide Area Differential GPS) system. It also involves an optimal detection and estimation of cycle slips and code outlies in its modified Kalman filter. Lastly, partial search and fix method is embedded in the Kalman filter. Here, we evaluate the performance of the modified LAMBDA method [8] for a long-range single baseline RTK positioning method in Indonesia. 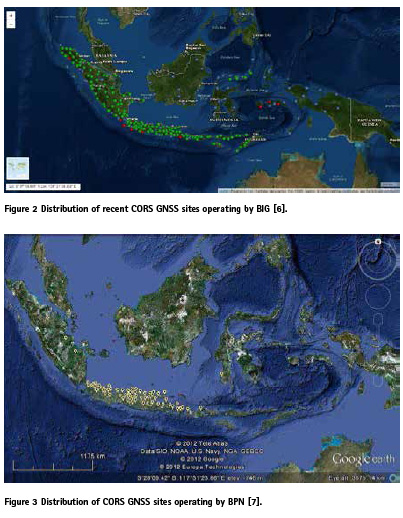 We established a simulated cadastral area in Pamengpeuk, Indonesia, in which is 85 kilometers away from the base station at Bandung, Indonesia. The simulated area has a vast elevation difference of 800 meters with the base station located since both areas has a contrasting geographical landscape. (Figure 4). With this setup, we expected there would be a significant atmospheric and orbit errors in the observation data. Our simulated area consisted of three land parcels and eight benchmarks.

Three aspects are being evaluated in this works, namely, position accuracy, repeatability, and area. The accuracy is evaluated by referring the estimated positions to the reference value as follows: (i) a differential static method is used as reference coordinates for benchmark points, and (ii) for land parcel points, relatively short baseline RTK method is used instead. The short baseline reduces the atmospheric bias significantly. In addition, our points are located in an opensky condition area, which makes it an ideal condition to measure a point. Next, a bunch of coordinates can be used to assess repeatability as indicated by the precision. Finally, we calculate the area and evaluate the difference compared to the reference area. The comparison method can be used to estimate the reference area if there is no official area reported by the authority. 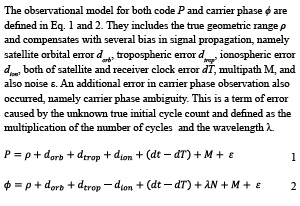 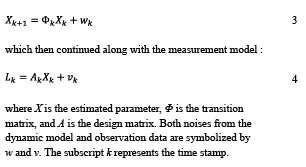 Kalman filler also implements recursive least square adjustment in which can be further divided into two main parts, observation and dynamic model. The observation model can be defined as: 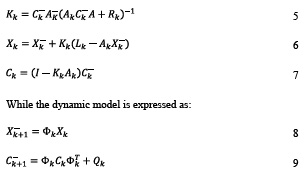 where K is the gain matrix, C is the covariance matrix observation model, and I is the identity matrix. The covariance matrix for the dynamic model and the weighting matrix are indicated as Q and R. The superscript indicates the prediction from the previous epoch.

Here, we only assess the resolve ambiguity data in our investigation to ensure the highest accuracy. This produced more than 1840 epochs for analysis. A total of 23 point observations were obtained, and no less than 80 epochs for each point were used for the analysis.

Figure 5 displays the coordinates difference between benchmark and land parcel points and the reference coordinates. The overall accuracy for benchmark points is 3-4 cm, with one point with a slightly worse accuracy. Compared to its reference, the point shifted by nearly 10 cm to south direction. This value, however, is still tolerable considering the nature of RTK method. One possible cause to this discrepancy is the incorrectly-fixed ambiguities. [10] reported that incorrectly-fix ambiguities can lead to shift the position up to 0.1 m.

On the other hand, we obtained 10 to 15 cm of accuracy for the land parcel points. We expected that we would get a higher level of accuracy, similar to the benchmark points. We suspected that there was a systematic error occurred during the observation. Therefore, we also measured the benchmark points using a short baseline RTK method and compare the result with the long baseline RTK measurement. The comparison can be seen in Figure 6 with the circles indicate the method used. The blue circle marks the accuracy of long-range RTK, while the red circle shows the accuracy of short-range RTK. Compared to the coordinates from the static differential measurement, the coordinates from short-range RTK shifted about 10 cm to east direction and 5 cm to south direction. This difference indicates there is a systematic error present in the short baseline RTK result. We believe that this error is due to the difference of coordinate system used in both methods. Any coordinate error on the base station could also affect the estimated points that tie on the base station. By applying this systematic error to the land parcel points, we also achieve a similar accuracy level as in benchmark points. 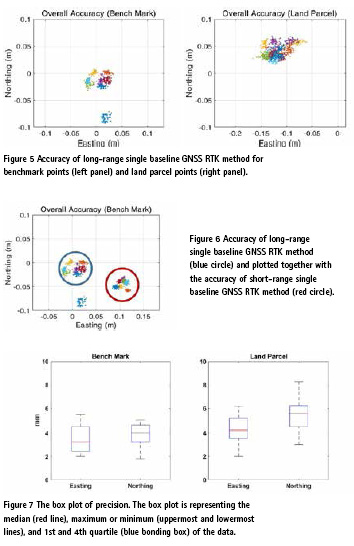 The precision from timeseries data were also assessed in this investigation. Figure 7 shows the box plot of precision in easting and northing component for both benchmark and land parcel points. The median precision is ranging from 3 to 6 mm. The worst precision value is about 8 mm, while the best precision is about 2 mm. Most of the timeseries coordinates met the 2-sigma of confidence level in all the observation points. This indicates a good reliability of this method. 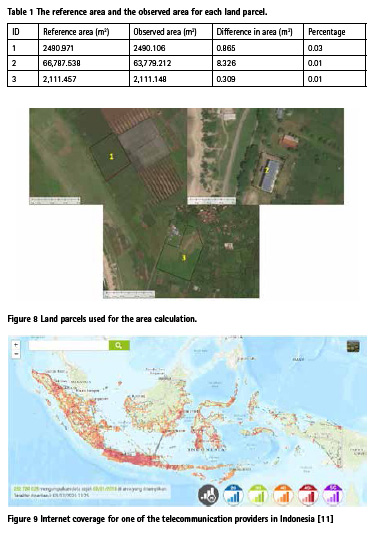 We also calculate the area formed by coordinates from the long-range single baseline GNSS RTK method and comparing them with the reference value. In summary, there is no significant difference between observed area and the reference area. The difference is less than 0.05% as shown in Table 1. We could not find any legal document in Indonesia that stated permissible tolerance for the difference in area. Although only a limited number of land parcels are utilized in this work, the results are promising.

We have demonstrated the potential use of a long-range single baseline GNSS RTK method in the land cadastral application. The difference of the result compared to the ‘true’ value is within centimeters level with the precision level of several millimeters. The calculated land parcel areas differ by less than 0.03% from the reference value. Considering these results, we believe that long-range single baseline GNSS RTK method could be one of the solutions to increase the efficiency of land registration in Indonesia.

It should be noted that GNSS method is not a best solution in all conditions. In this work, we setup and ideal condition that is suitable for GNSS positioning. However, some considerations are needed if this method were to be used in an urban setting or in an obstructed area. A conventional terrestrial method, e.g. by using a total station might be more suitable. However, using this method might leads to a new problem in the future, e.g., the issue of overlapping land claims if there are no nearby tie points available. For this reason and recalling the One Map Policy declared by President of Indonesia, Joko Widodo, we are still in need for the GNSS positioning method. A combination of the long-range single baseline GNSS RTK method with the conventional terrestrial traverse method will be a better alternative for parcel measurement.

GNSS relies heavily on communication. Thus, infrastructure and telecommunication also need to be considered. The authority agencies, BIG and BPN, should keep up the excellent work in maintaining and operating all CORS GNSS stations. This includes providing steady power supply, keeping the hardware maintained, updating the software, and also arranging human resources to maintain the continuous operation of the CORS GNSS system. Telecommunication is not only needed for the CORS GNSS site but also for the user (GNSS rover). Most of the GNSS rover relies on the cellular network to obtain corrections. Similar to the density of the CORS GNSS location, only Java and Sumatra that have full coverage of internet service (refer to Figure 9).

Nevertheless, the use of the GNSS positioning method is needed for the land cadastral application, especially in keeping with the government wish to establish a single reference of the cadastral map throughout Indonesia to solve the overlaid boundary issue. Considering the current condition in Indonesia and referring to our results, we believe that the presented method is a promising solution to get a full potential of GNSS observation.

We acknowledge to PT General Technology Indonesia (GETINDO) for providing all the GNSS receivers used during this work. We also thank students for helping the data acquisition during this work. Several colleagues have helped with suggestions to improve the quality of this article.