Light Detection and Ranging (LiDAR) is an active remote sensing technique that uses laser light, can be used to produce high-resolution scans of a tree’s morphology, often known as plant phenotyping. Laser scanning is a technique for acquiring data that uses the LiDAR principle. The laser scanner, also known as 3-D laser imaging, is a device that is used to capture, collect, and store precise data of an object’s physical size and shape. Laser scanners work on the idea of producing laser light that hits an object and then reflects back to the scanner. The data is then transferred to a computer and shown as a digital threedimensional model. The laser scanner able to scan object’s surface rapidly then record the shape and visual properties in form of intensity and/or RGB information. The collected information is returned to the unit in the form of point cloud data that consists of XYZ coordinates. It was designed to capture accurately on smaller objects for inspection, replication and other purposes. There are various types of laser scanners, including mobile, airborne, and terrestrial scanning. The mobile laser scanner (MLS) was designed to work from a moving vehicle, such as a car, boat, train, or other similar vehicles. Aerial scanning, also known as airborne laser scanning (ALS), is carried out using an unmanned aerial vehicle (UAV), planes, or helicopters. It usually involves mapping and terrain surveys over a large area. Terrestrial laser scanning (TLS) is a ground-based version of the airborne LiDAR is an accurate, quick and flexible measurement technique that can complement or partially replace other existing geodata acquisition technologies. Currently, there are three types of laser scanner namely time of flight (TOF) scanner, phase-shift (PS) scanner and triangulation-based system scanner.

Previous research yielded high correlation and accuracies indicates that LiDAR technology can be used in the agricultural field and possible to be applied in the oil palm plantation for BSR disease detection. A tree’s biophysical features can be assessed to determine whether it was infected with a specific disease or related pathological disorders associated with distinctive symptoms. Because of the infection, there were differences in canopy density between healthy and infected trees, with infected trees having reduced foliage density and leaf area. The 3D canopy structure model was used to analyse vegetation diseases, and it was discovered that disease severity was associated with a canopy structure. In addition, because the disease affects crop morphology and canopy structure, it can be recognised early by observing changes in canopy morphology. Furthermore, canopy biophysical parameters, canopy structure, and geometry are critical in predicting the healthiness of the canopy. This article discusses briefly the previous study on the application of LiDAR for Basal Stem Rot (BSR) disease in oil palm plantation, consisting of changes in oil palm architecture, stratification of oil palm crown, combination of parameters and machine learning approach and multi temporal study.

The most threatening disease to the oil palm is Basal Stem Rot (BSR) disease caused by Ganoderma boninense. The main canopy symptoms of BSR disease are declination of the tree’s canopy forming a “skirt-like” shape, appearance of unfolded spears and smaller crown size because of leaves deterioration. All these physical symptoms are progressing gradually from mild to severe level. Thus, the level of infection can be classified. Therefore, in these studies, oil palm trees were categorised into four health levels – T0, T1, T2 and T3, which represents the healthy, mildly infected, moderately infected and severely infected, respectively based on the symptoms of BSR disease. The TLS scanner was mounted at a height of 1 m at a distance of 1.5 m and each palm was scanned at four scan positions around the tree to get a full 3D image. All collected scans were imported into SCENE software for processing and further analysis. The “Registration” step was completed in order to match the multiple scan positions and to synchronise the laser point data to create a cluster of point clouds.

Three parameters were investigated in the research of oil palm canopy architecture: the number of pixels inside the crown (crown pixel), the degree of angle between fronds (frond angle), and the number of fronds (frond number). The findings reveal that the crown pixel, frond angle, and frond number are all significantly related and that the BSR severity levels are highly correlated. As a result, the mildly infected (T1) stage of a Ganoderma boninense was the earliest stage that could be detected. For frond angle, all post hoc tests showed consistent results, and all levels were significantly separated except for T0 and T1. By using the crown pixel parameter, healthy trees (T0) were separated from unhealthy trees (moderate infection [T2] and severe infection [T3]. Using the crown pixel and frond angle data, Ganoderma boninense could be diagnosed as early as the T2 level. It is difficult to tell the difference between T0 and T1 because the symptoms are so similar with a moderate infection. 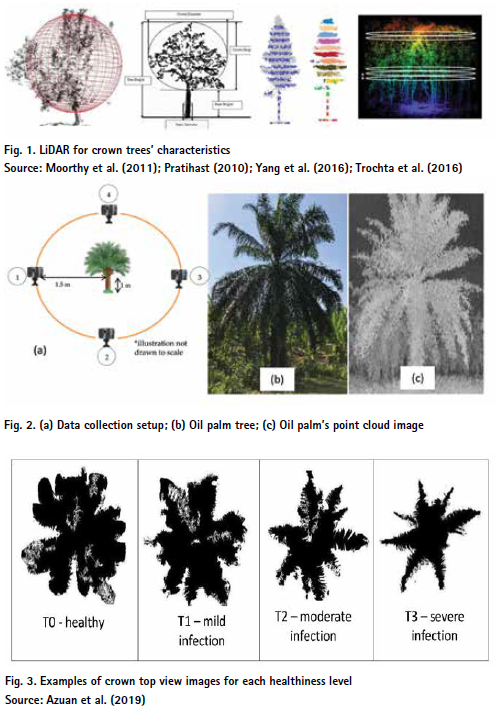 In the study of oil palm canopy architecture, three parameters were analyzed: number of pixels inside the crown (crown pixel), the degree of angle between fronds (frond angle), and the number of fronds (frond number). The results show that the crown pixel, frond angle, and frond number are significantly related and that the BSR severity levels are highly correlated. Therefore, the earliest stage that a Ganoderma boninense could be detected was mildly infected (T1). For frond angle, all post hoc tests showed consistent results, and all levels were significantly separated except for T0 and T1. By using the crown pixel parameter, healthy trees (T0) were separated from unhealthy trees (moderate infection [T2] and severe infection [T3]. Thus, Ganoderma boninense could be detected as early as the T2 level by using the crown pixel and the frond angle parameters. It is hard to differentiate between T0 and T1, because during mild infection, the symptoms are highly similar.

This study used TLS data to examine the effect of crown profile due to BSR and develop a BSR detection model using crown strata. The crown stratification method was used to create crown strata (referred to as Cn; where n is the crown length in cm). The amount of laser hits in the strata was used to create crown profiles comparing healthy and diseased oil palm trees, establish prediction models, and evaluate crown density trends in different regions of the tree. By using a systematic multi-scan approach, the study was able to account for the occlusion issue. The profiles of crown strata revealed that the healthy trees have higher crown densities than unhealthy trees starting from 250 cm from the top (strata no. 5) to the bottom. In the classification of healthy and infected trees, prediction models based on the strata parameters C650, C700, C800, and C850 were 92.5 per cent accurate.

Five parameters were analysed: canopy strata at 200 cm from the top, canopy strata at 850 cm from the top), crown pixel (number of pixels inside the crown), frond angle (degree of angle between fronds) and frond number. According to statistical analysis, the best single parameter for detecting BSR illness as early as T1 was frond number. In classification models, a linear model with a combination of parameters, ABD – A (frond number), B (frond angle), and D (S200) produced the highest average accuracy for categorization of healthy-unhealthy trees, with an accuracy of 86.67 per cent. It also can classify the four categories of infection severity with an accuracy of 80%. When compared to the severity categorization based on frond number, this model performed better. This model performed better when compared to the severity classification using frond number.

The aforementioned parameters were evaluated using principal component analysis (PCA) in a machine learning approach to minimise the dimensionality of the dataset and increase its interpretability while minimising information loss. The results showed that the kernel naïve Bayes (KNB) model developed using the input parameters of the principal components (PCs) 1 and 2 had the best performance among 90 other models with a multiple level accuracy of 85% and a Kappa coefficient of 0.80. Furthermore, the classification success was aided by the combination of the two largest PC variances with the most weighted to frond number, frond angle, crown area, and C200. The model was also 100 per cent accurate in classifying healthy and mildly infected trees.

In the precision agriculture field, spatiotemporal data is critical for better oil palm management. It can be done by understanding disease development for long-term solutions, and providing a quick response so that suitable treatment may be delivered to the palm as soon as feasible. With two distinct scan lengths, i.e. 2- and 4-months following the first scan, terrestrial laser scanning data was used to analyse changes in the crown and frond metrics of oil palm plants. To evaluate significant differences in the parameters at different times in time, statistical analyses were performed, including the Kruskal–Wallis test with α = 0.05 and the Wilcoxon post-hoc test. The crown strata number 17 (850 cm from the top) and the crown area were found to be the most appropriate criteria to utilise. Furthermore, by comparing the 4-month scan with the second 2-month scan, oil palm trees with BSR can be identified. The findings revealed that the effects of Ganoderma boninense infection can be distinguished at the later stage.

It can be concluded from this study that TLS remote sensing data provide precise physical properties of oil palm trees. The work filled a research gap in the application of TLS in oil palm disease detection research. The terrestrial laser scanner’s extensive laser point data can be used to identify the geometric aspects of oil palm plants. The use of physical features of the canopy structure in this novel image processing technique is critical for early disease identification, management, and control. With the help of preprocessing and postprocessing facilities, it also can be employed for in situ application. TLS delivers tree-level data to help farmers achieve their precision farming goals. The laser scanner will give faster scanning times and more broad scanning coverage for the entire plantation in. the future. A sensing system based on cutting-edge algorithms and onsite technology could provide more precise data for establishing an up-to-date oil palm plantation health database.

Despite its potential, the proposed method’s key flaw is the feature extraction process, as some of the characteristics required to be manually extracted. The extraction of features could be automated in the future using deep learning technology. Meanwhile, the plantation manager could examine the position and healthiness level of the trees via an online platform, and an alert system might be built. Furthermore, by taking into account the differences in static and dynamic systems, such as spatial resolution, viewing angle, scanning area, distance, scanning mechanism, data capture mode, and the obtainable accuracy, the method could be expanded by using mobile laser scanning (MLS) and airborne laser scanning (ALS). The scans might be done concurrently in MLS by attaching the mobile scanner to a trailer or tractor employed in the plantation, with a clear path and clear height in the plantation planned to avoid colliding with the fronds. Meanwhile, ALS has the potential to cover a bigger area and take less time than TLS.

LiDAR data is becoming more widely available and of higher quality, and when combined with a method for identifying individual oil palm trees, it has the potential to be useful in research and precision agriculture applications. TLS’ availability and resolution are anticipated to rise as technological advances continue. Scanners with advanced and greater capability, capable of scanning an entire plantation area with a single scan at a reduced cost, could be created in the future. The method might be used to create an accurate and quick oil palm health map for disease identification in real-time.