Indian Regional Navigation Satellites System (IRNSS) is the world’s fi rst regional navigation system with its footprint primarily over the Indian subcontinent. The system is expected to have seven satellites in all, with three satellites in GEO stationary and four in GEO synchronous orbits (Kibe & Gowrishankar 2008). IRNSS is dual use and supports two frequencies on either service of operation. Amongst various design parameters, availability is a paramount requirement in any GNSS. Availability is defined as the period of time a system is usable or alternatively is the ability of the system to provide solutions over a specified region. IRNSS being a regional system, availability has to be highly optimized from an operational perspective.

Work till date has analysed and presented results achievable with the current IRNSS constellation. The basis for selecting the current constellation is not available in the public domain. This work explores the possibility of having an alternate IRNSS constellation which maximizes availability and thus achievable accuracies. In addition, the chosen constellation is constrained by slots (for satellite placing) available to the Indian Space Research Organization (ISRO), the agency responsible to design, develop and deploy the IRNSS satellites. A brief introduction on the GPS Aided GEO Augmented Navigation (GAGAN) is presented next, primarily to highlight its constellation. With this as an input, a simulation basis is then defined. Following this, the simulation results with a detailed analysis of the proposed constellation are presented emphasising its merits. Finally, the conclusion with pointers to future work is highlighted.

The void Satellite Based Augmentation System (SBAS) foot-print between the EGNOS (Europe) and MSAS (Japan) is established by GAGAN. It primarily transmits the correction and integrity information for all the visible GPS satellites over the Indian subcontinent. The need and the contribution of SBAS are described in several other publications (Ganeshan 2012). However, the constellation is of relevance to this research. GAGAN will have three geostationary satellites when fully operational with the signal footprint spanning over the Indian subcontinent (Kibe & Gowrishankar 2008). Two of the GSAT satellites (GSAT-8 and GSAT-10) are already carrying the GAGAN payload and are in the testing stage. The constellation of the existing GAGAN satellites are 55Â°, 83Â°east,with no information on the third. With this as input, the following section presents the proposed coordinates of IRNSS.

Several documents have been published to describe the merits of a combined GNSS architecture from a user perspective [for example, IRNSS+GPS+GLONASS, (Rao et al 2011)]. However, this research attempts an analysis within the systems (optimization w.r.t satellites) and presents the availability/accuracies achievable. Towards this, several simulations were carried out and the most optimal locations which are available (slots) to ISRO were selected for IRNSS as shown in Table 1. As is obvious from Table 1, two new locations are proposed for IRNSS GEO, which coincides with the GSO crossing of the equator. The following section presents the analysis/results w.r.t availability and accuracy. Alternatively, the GEOs on the existing configuration (34Â° and 132Â° east) are moved to (55Â° and 111Â° east). 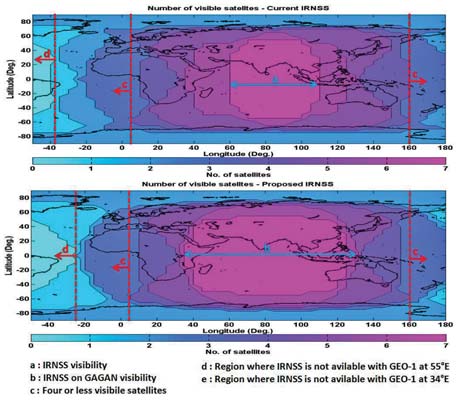 The detailed analysis from assumption to improvements is explained (sequentially) as follows:

• The reason for assuming 111° east for the third GEO is to have a common overlapped footprint with the existing satellites and improve availability.

• The availability with the proposed IRNSS constellation is as shown in Figure 1. The result is an improved (wider) common footprint along with current IRNSS geosynchronous satellites.

The relative improvement (reasons) is as explained as follows:

•In contrast, with the proposed IRNSS constellation, area “b” in Figure 1 is wider due to the close spacing of the geostationary satellites 55° and 111° east, which results in a wider coverage area along with the geosynchronous satellites. Thus the significant improvement in availability area, which from a regional perspective is greatly desirable.

• The IRNSS objective is independent positioning and thus as a system objective it is imperative to maximize the coverage area where independent positioning can be established. A close examination of Figure 1 reveals the following: Availability west of line “c” remains the same and is less than 4. Thus the effective region of operation (independently) is east of this line for either configuration. The reason for this is that in either configuration visibility to the geostationary satellite (83° east) is lost, which is common to both configurations. A similar phenomenon exists on the right side of the “a” and “b” polygons. 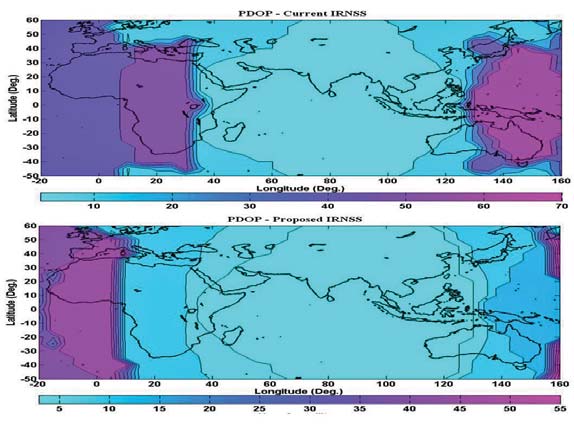 1) ºOne possible reason for having the current IRNSS geostationary satellites at 34° and 132° east could be for extended coverage of the system. The merit of this argument is highlighted in Figure 1 and explained as:

• To the west of line “d” and “e”, the visibility is completely lost in both the proposed and existing IRNSS. This is attributed to the visibility from the geostationary satellites at 55°and 34° east respectively. Though visibility is established for an extended range of about 15° (marginal areas) with the current IRNSS constellation, it does not assist with independent positioning. A similar condition exist on the right side of the “a” and “b” polygons.

2) From an availability perspective, the improvement is significant w.r.t to the number of satellites over a wide region, which is of the order of 60% (seven satellite coverage) with that of the existing system.

Thus from an availability and accuracy (Figure 2) (considering only the available region) perspective, the proposed architecture is more beneficial from a regional perspective and the resulting constellation is shown in Figure 3. 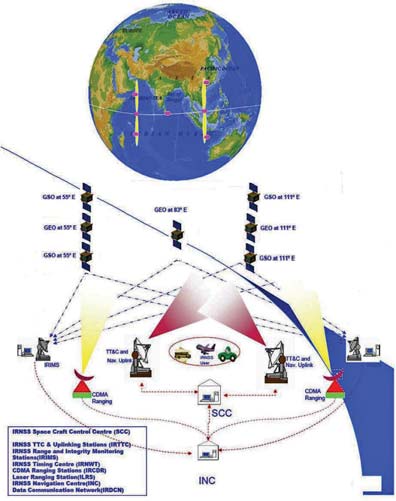 One of the general approaches to enhance coverage is by having more satellites. This research performed an analysis with different vectors (locations of satellites), deduced an optimal constellation with slots available to India (ISRO) and yet achieves 60% more coverage (w.r.t availability and thus accuracy) than the existing constellation. From a regional perspective this is a significant improvement where more coverage is achieved with less (without additional) satellites. With this as reference, if additional satellites are added to this constellation in future, availability/ accuracy and in turn robustness (satellite failure) can be addressed. As a future activity, the synergy derivable from the proposed IRNSS and the existing GAGAN will be examined.

The first author would like to thank the management of Accord Software & Systems Pvt Ltd India for partially supporting his doctoral studies.