Roger Bilham of Colorado University predicted a magnitude-9 earthquake in Kashmir Valley. The US professor claimed that his observation is basedon the new GPS data readings which revealed gradual movement of rocks in the Zanskar mountains north of the valley. Bilham has, however, put no timeframe for his predictions. In its typical doomsday forecast, the study warned, “The zone would rupture when a quake eventually happens. The quake would be 200 kilometres wide as against 80 kilometres predicted earlier.” 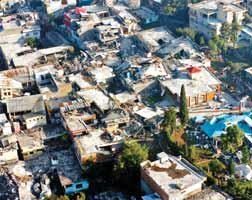 Commenting on Bilham’s study, M.I. Bhat, a senior geologist in Srinagar, said, “Earlier we believed that the Kashmir Valley was vulnerable to destruction from quakes generated along the Pir Panchal mountain range. But with availability of the GPS data from the region, it is now evident that the northeastern side of the valley is more vulnerable to earthquake generation than the Pir Panchal range.”

An Indian defence team of scientists and defence brass inked an agreement with Russia for receiving precision signals from Glonass. These signals will allow missiles, including those fi red from nuclear submarine Chakra, to strike within half a metre of distant targets.
www.thehindu.com

According to NIS Glonass, it will start its India operation in the fi rst quarter of 2012 with its head offi ce in Mumbai and regional offi ces in Delhi and Chandigarh. The company is part of JSFC Sistema, the largest public diversifi ed fi nancial corporation in Russia and the CIS and manages a business portfolio of highgrowth consumer service companies. So far, the company has done pilots with Glonis Solution and HBL Power Systems in the Indian market related to fl eet management system. For embedded system, the company has signed up with Tata Elxsi.
www. voicendata.ciol.com

In a joint statement, Russian President Dmitry Medvedev and Indian Prime Minister Manmohan Singh said that Russia and India intend to cooperate in the production of satellite navigation equipments and to provide services to civilian users of the Glonass system.
http://en.rian.ru

EGNOS extends its reach to the UK and Germany

EGNOS Safety-of-Life signal for aviation is set to extend from France and Switzerland to the UK and Germany, according to the European Space Agency (ESA). The system is the European equivalent of the ‘Wide Area Augmentation System (WAAS)’ overlay service in use across North America, which is today being used by more than 40 000 aircraft with more than 2000 landing procedures published. French airports Pau Pyrénées, Clemont- Ferrand and Le Bourget were the fi rst to authorise use of EGNOS, joined last month by Les Eplatures Airport and St. Gallen-Altenrhein Airport in Switzerland, planning to use it as a lowcost backup to ILS in the event of bad weather. Germany’s Federal Supervisory Authority for Air Navigation Services has given permission for EGNOS to be used across 38 German airports from 15 December onwards.
www.esa.int

Using GPS spoofi ng technique, Iran guided the “lost” stealth US drone (RQ-170 Sentinel) to an intact landing inside hostile territory, according to an Iranian engineer now working on the captured drone’s systems inside Iran. The engineer explained that Iran used the knowledge gleaned from previous downed US drones and a technique proudly claimed by Iranian commanders in September, the Iranian specialists then reconfi gured the drone’s GPS coordinates to make it land in Iran at what the drone thought was its actual home base in Afghanistan. The US military has reportedly been aware of vulnerabilities with pirating unencrypted drone data streams since the Bosnia campaign in the mid-1990s.
www.csmonitor.com