GNSS to save water

Better management of water resources is one of today’s biggest challenges.

At present, 70 percent of freshwater worldwide is used by agriculture. To feed an addition 2 billion people by 2050, the Food and Agriculture Organization of the United Nations (FAO) predicts a 300 percent rise in food production. As a result, water demand is expected to increase tremendously in the next few years. Farmers are challenged to produce “more crop per drop” (on the one hand, to reduce water consumption, and on the other hand, because of the increasing fuel price). In 2003, FAO reported that only 20 percent of arable lands are irrigated, but they almost produce half of global harvest, which means that irrigation more than doubles land productivity.

To face these upcoming challenges, it is key to raise water awareness and use this highly valuable resource in a more efficient way.

In order to optimize irrigation and avoid wastage, farmers have to provide the right amount of water at the right time, in the right place. To do so, better insights in the spatial and temporal patterns of soil moisture content (i.e., the water contained in the soil) are essential.

Although solutions for soil moisture measurements exist, they do not completely fulfil the agriculture needs: they either lack in spatial or temporal aspects (sometimes both).

When they don’t rely on the nearest hydrological or meteorological station (that can be too far away to be representative), farmers use information from a single point sensor within the field. Even if continuous measurements (from a temporal point of view) can be performed, a single point does not allow to characterize soil moisture spatial variability within the field. As a consequence, soil water content might be under or over evaluated for part of the field.

On the other side, satellite imagery can provide humidity indicators at global scale. Unfortunately, these images come with a low spatial resolution and with a consequent latency. For instance, SMAP mission (Soil Moisture Active Passive, NASA) final products, including soil moisture at 9km resolution, are available within 7 days after data acquisition. Another limitation of satellite measurements is that their periodicity is not flexible. For the ongoing soil moisture-dedicated satellites missions (such as SMAP or SMOS – Soil Moisture and Ocean Salinity, ESA), global earth coverage is achieved every three days.

To complement field measurements and satellite data, the objective of MISTRALE project (Monitoring soIl moiSture and waTeR-flooded Area for agricuLture and Environment) is to offer high resolution and on-demand soil moisture maps, based on a RPAS (Remotely Piloted Aircraft System)- embedded GNSS reflectometry sensor. If soil moisture maps are an invaluable tool for farmers, monitoring the humidity content is also of prime importance to understand when excess rainfall will cause water logging and flooding. 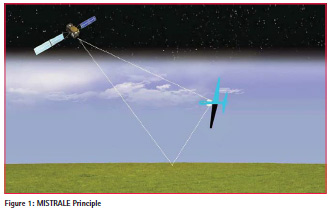 MISTRALE sensor relies on an innovative use of the GNSS (Global Navigation Satellite System) signals, which were initially designed for localization purpose. The well-known American GPS and European GALILEO systems are examples of GNSS that will be used to compute soil moisture. The sensing technique is named reflectometry (GNSS-R). It consists in comparing the direct signals (i.e. the signals directly travelling from the satellite to the receiver) with those reflected by the ground. The comparison between the properties of the direct and reflected signals provides estimations of the soil water content. Thanks to the large flight envelope of the RPAS (low speed and low altitude), high spatial resolution of the soil moisture maps can be achieved.

GNSS-Reflectometry technique is especially appropriate for soil moisture monitoring. Indeed, at GNSS signals frequency (near 1.5 GHz), the characteristics of the reflection mainly depends on the Fresnel reflection coefficient, which is itself related to soil moisture content. Therefore, the computation the ratio between the groundreflected GNSS signals and the direct one provides measurements of the soil’s reflectivity, which can then be translated to humidity content. The direct GNSS signal is right-hand circular polarized (RHCP) by design. When reflected, the polarization is mostly inverted. The uplooking GNSS antenna is therefore RHCP, while the down-looking one is LHCP.

When it comes to soil moisture, using GNSS-R technique has several advantages compared to the other usual techniques such as visible/Near Infra-Red imagery. Since GNSS signals lies in L-band, the GNSS-R is operational under cloud cover and during the night. In addition, it is less influenced by variation on the thermal background. Yet, it is worth noting that GNSS-R measurements are affected by soil roughness and by vegetation. Roughness impact can be mitigated using polarimetric measurements and computing the apparent reflectivity for both left-hand and right-hand circular polarizations reflected signals. Next to this, the attenuation of the reflected signal due to vegetation can be taken into account by using a corrective term (based on Normalized Difference Vegetation Index measurements).

RPAS platforms have been chosen to carry the GNSS-R sensor above target fields. With respect to MISTRALE goal, the expected advantages of an RPAS compared to manned aircrafts is the reduction of operational costs as well as a high flexibility to fly at the proper time.

Due to the high disparities between MISTRALE potential users and missions, two types of RPAS have been identified: (i) a one-hour-endurance short-range RPAS, mainly for agriculture fields, and (ii) a long-range one, to monitor wider areas (required for flood-prone area surveillance or scientific purpose). The latter is able to fly continuously for 10 hours and has a range of 1000 km.

Among the existing GNSS-R approaches, the two following have been considered: The waveform one (also called classical GNSS-R or cGNSS-R), which consists in comparing the amplitude of the direct and reflected GNSS complex waveforms (i.e. the correlator’s output), and the SNR (Signal-to-Noise Ratio) method, based on the comparison of the SNR of the direct and reflected signal.

The advantage of the latter is that it does not require a reflectometry-dedicated GNSS receiver, since SNR is an output of classical GNSS receivers. Nevertheless, a strong specular reflection is needed to track the reflected component, which is hardly compatible with the high dynamics of RPAS flights.

If waveform technique suits MISTRALE concept best, one main limitation is encountered at present time: the size and weight of this kind of sensors. Therefore, MISTRALE aims at developing a dedicated waveform receiver with a form factor that makes the final product easy to install on a RPAS. This GNSS-R receiver uses both GPS and GALILEO signals, which improves the system performances. Thanks to a higher number of available satellites and to the GALILEO signals characteristics, the sensor’s measurements accuracy is enhanced. 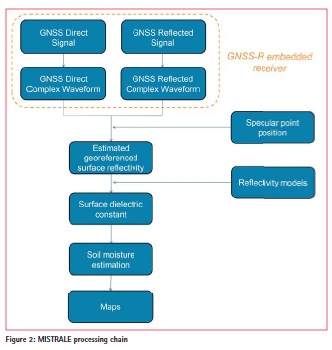 MISTRALE processing chain is divided in onboard and ground parts. Coarse GNSS data processing is performed onboard in order to reduce the amount of data to be stored during the flight, then the soil moisture content computation is performed on the ground.

The different processing steps are gathered in Figure 2.

At first, inside the GNSS receiver, both direct and reflected Radio Frequency (RF) signals are down-converted to Intermediate Frequency (IF). Then, based on the IF signals, time stamped complex cross-correlations waveforms and Doppler measurements are extracted (L0 data). In a third step, the direct and reflected complex crosscorrelations waveforms are computed using the L0 data. These waveforms are the data stored during the flight.

Once back to the ground, the amplitude waveforms are obtained from the complex waveforms. After coherent and/or incoherent averaging (in order to reduce the thermal and speckle noise), the apparent reflectivity can be expressed as [1]:

By comparing the reflectivity values computed with theoretical model, the surface dielectric constant is determined.

Then, depending on the additional information available, different models can be applied to translate surface dielectric constant into soil moisture. For instance, Topp model [2] consists in translating empirically one into the other, whereas Dobson one [3] expresses the soil moisture as a function of frequency, soil temperature, soil composition, bulk soil density, and soil particle density (in addition to the dielectric constant). The more ancillary data available, the more efficient the model.

Finally, the soil moisture maps are constructed using measurements of each specular point. The final map resolution depends on a high number of parameters (some being mutually dependent): the RPAS altitude and speed, the data sampling rate, the distance between two parallel tracks, and the GNSS constellation geometry (number of satellites and their altitude and elevation) together with the elevation mask. Last but not least, all these parameters have to be related to the RPAS endurance and the size and shape of the target area.

At present, the MISTRALE-dedicated sensor is being integrated and initial test have been performed. It is worth mentioning that several experimental flights have already been carried out.

The first ones took place in the South of France (Camargue & Pech Rouge) in July 2015 and aimed at validating the technical feasibility of MISTRALE concept. To this end, a high-end bit grabber was embedded on an ultra-light aircraft, its form factor not allowing integration on an RPAS. Two antennas were screwed into the plane (see Figure 3): one on the top, which receives the direct GNSS signal, and one on the bottom, which receives the reflected GNSS signal. The top antenna is Right Hand Circular Polarized (RHCP) whereas that of the bottom is Left Hand Circular Polarized (LHCP) (signal polarization changes when reflected). 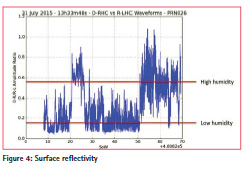 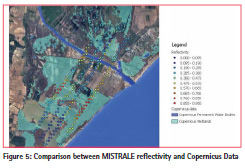 Both direct and reflected signal have been recorded and a GNSS-R waveform software receiver was then used in post processing to compute the GNSS waveforms. Then, part of MISTRALE processing chain has then been performed to provide preliminary results. Figure 4 displays the estimated surface reflectivity for one satellite (PRN 26). High and low reflectivity areas can be distinguished. After cross validating with aerial photography as well as satellite imagery (see Figure 5), it appears they indeed corresponds to high and low humidity areas, which validates MISTRALE approach, i.e. performing soil moisture measurements with a waveform GNSS-Reflectometry sensor onboard flying platform. The second flight campaign was conducted in Toulouse area in January 2016 using the Boreal RPAS (long-range RPAS from AJS, see Figure 6). This experiment aims at testing the other GNSS-R technique (SNRbased) with a low-cost setup: classical UBlox 6T GNSS receiver and low-cost GNSS antennas (both RHCP). This approach suffered from strong limitations due to the use of low cost antennas (both RCHP), making the reflected signal (which is mainly LHCP) hard to retrieve.

A third test campaign was scheduled in July 2016, using the same low-cost receiver as in the previous one, but this time with dual-polarized antenna, enabling to receive both RHCP and LHCP reflected signal. The data are under processing. 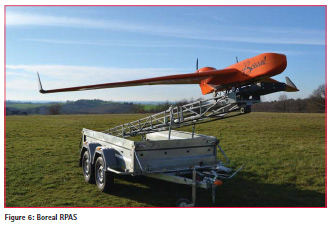 Finally, by end 2016, MISTRALEdedicated reflectometry receiver will be ready for test flights on the Boreal RPAS.

First airborne campaigns demonstrated the feasibility of measuring soil moisture content using a GNSS reflectometry sensor embedded in a RPAS, and produced valuable data for the development and calibration of the GNSS-R algorithm. MISTRALEdedicated subsystems have been developed and their integration in the RPAS is ongoing. Field testing of MISTRALE prototype is scheduled for end 2016.

The MISTRALE project has received funding from the European GNSS Agency under the European Union’s Horizon 2020 research and innovation programme under grant agreement no. 641606.