The 22nd July 2013 saw the start of the first combined meeting of the Cambridge Conference and UN-GGIM. Both these conferences bring together geospatial leaders from around the world to discuss the pressing matters that are most prominent in this ever changing industry. This year’s conference also offered the opportunity for students from both The University of Sheffield and The University of Cambridge in assisting the United Kingdom’s Ordnance Survey team in the smooth running of the event. Such an opportunity has giving us, as students, a unique perspective in the running of international events and has allowed us to meet industry experts in the geospatial field.

Held approximately every four years, the Cambridge Conference is an international congregation of senior representatives and leaders from mapping organisations from around the world. Dating back to the 1920s the Cambridge Conference was originally a small gathering of 45 delegates then known as the Empire Conference of Survey Officers. Over the years the conference has dramatically changed in response to ever changing technologies and the increasingly globalised world. The second half of the week was dedicated to third session of the United Nations Committee of Experts on Global Geospatial Information Management (UNGGIM). Putting the UN-GGIM meeting back to back with the well-established Cambridge Conference enabled the event to bring together many experts from all areas of the geospatial field.

The Cambridge Conference was based at Churchill College, one of the newer Cambridge colleges, which was founded in honour of Sir Winston Churchill in 1960. The college is normally home to around 500 students, mainly of the scientific disciplines. Appropriately enough the motto of the college is ‘Forward’, taken from one of Churchill’s most famous speech ‘Come, then, let us go forward together’.

The members of the student team came from a variety of academic backgrounds, not limited to geography, and range from first year undergraduate students to recent graduates. The University of Cambridge is ranked as one of the world’s leading universities, whilst The University of Sheffield has strong links to the conference through notable alumni. These include Dr Vanessa Lawrence CB, the Director General of Ordnance Survey and Co-Chair of the UN-GGIM and Air Chief Marshal Sir Stuart Peach KCB CBE the Vice Chief of the Defence Staff in the United Kingdom. Throughout the week we were tasked with many diverse roles ranging from welcoming delegates to rapporteuring at the conference proceedings. It wasn’t all work however, with social events happening most days including a traditional English garden party complete with croquet, as well as a BBQ in the beautiful setting of the Clare College grounds which introduced many delegates to the traditional Cambridge pastime of punting. 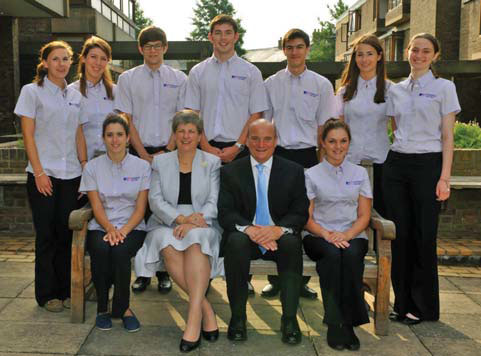 Throughout the week many guest speakers attended the Cambridge Conference. On the first night of the conference, we were delighted to welcome guest speaker Nick Crane, a geographical writer and broadcaster whose publications include a travel book, Clear Waters Rising, as well as over 70 films for the BBC. Nick’s speech was in honour of the famous cartographer and mathematician Brigadier Martin Hotine CMG CBE and focused on his manifold contribution to the world of mapping. Such achievements include the retriangulation of Great Britain from 1934-1939 which has underpinned Ordnance Survey’s reputation for high technical standards and innovation. Other guest speakers included Sir Stuart Peach who focused on the challenges of military cartography in Afghanistan, as well as Paul Davies, the Chief Meteorologist of the United Kingdom Met Office, who highlighted the role of geospatial data in the area of climate change and disaster mitigation. These speeches proved interesting for us, as students, as the material discussed echoed the topics learnt at university.

The remaining sessions saw contributions from experts in the field such as Stefan Schweinfest, the Acting Director of the UN Statistics Division and Professor Paul Cheung, the Senior Advisor to the UNGGIM. There were also discussions open to the floor with many nations engaging with the topics and sharing their unique perspective with the global audience. A common theme within the conference was a need for increasing collaboration and a need for international standards to improve the efficiency and effectiveness of geospatial operations.

The second half of the week was based in the more central surrounding of the Cambridge Corn Exchange, which normally serves as a concert venue but was transformed into a world class technological hub for international delegates at the UN-GGIM. The session was led by Dr Vanessa Lawrence and Stefan Schweinfest. This event gave a few of the students the opportunity to play an integral part in the proceedings as rapporteurs which proved to be a challenging but thoroughly enjoyable task. Some of the issues discussed included the future development of linking geospatial information to statistics as well as the integration of land and marine geospatial information.

Thursday evening witnessed one of the highlights of the week, the Gala Dinner. This was a gathering of our delegates at Girton College, one of the first female colleges in the University. Delegates were encouraged to come dressed in their national costume which some delegates embraced enthusiastically, our favourite being the delegate from Georgia. After a wonderful meal many nations contributed to the entertainment by presenting national songs. Highlights included powerful and uplifting vocals from the Chinese delegation, a traditional Australian performance of “Tie Me Kangaroo down Sport” and the Ordnance Survey “choir” singing the classic Proclaimers song “500 miles”. To finish the night off all delegates were invited to join in with the UN-GGIM “anthem”, an adaptation of “My Bonnie Lies over the Ocean”!

As this week draws to a close, although many of us are tired, we are sure that most would agree that the conference has been a great success. It has been an enjoyable and unique experience to be part of this truly international occasion which has allowed us to mix with world leaders in the geospatial field. We would definitely recommend students to take part in any similar opportunities that may come their way as the insight gained may prove invaluable towards future career aspirations. Even for students who do not specialise in this field, the conference has proved useful through acquisition of more general skills and an awareness of a world of which they previously had no understanding.

In short, the conference has highlighted the vital importance of cooperation between countries, organisation and people and we hope Ordnance Survey offer this opportunity to students at the next Cambridge Conference in a few years’ time!