This study deals with UAV photogrammetry for crop analysis and considers its applicability for vegetable crops. The author tries to overlay seamless cadastral map with UAV digital image, supporting the crop statistics agency making a rapid and objective decision for crops. The results show that UAV photogrammetry is reasonable for identifying its crop growth status in terms of the image quality, timesaving and task-effectiveness.

The United States Department of Agriculture’s (USDA) National Agricultural Statistics Service (NASS) has researched and used remote sensing technology for acreage estimation since the early 1970s. Significant advancements in recent years have enabled NASS to transition the use of remote sensing from primarily a research function to performing an integral role in the agency’s crop acreage estimation program, covering all major crops grown in high producing states in the US (Bailey and Boryan., 2010). China is a big agricultural production, agricultural product consumption and trading country, the abundance of crops have long been paid much attention by society and government. China started to study remote sensing technology for crop acreage by National Bureau of Statistics of the People’s Republic of China, 2003 (Zhang et al, 2010). With 3S (RS, GIS, GPS), the on-site survey system was constructed and the estimation of crop production with remote sensing is preceded rapidly. The crop model is developed successfully and is about to carry out a test survey (NSO, 2010). EU (Europe Union) is focusing on identifying the current situation of the food production, and is constructing the satellite image-based sample survey system in order to investigate 8 crop acreage with 60 image sample (40km*40km) in total. Through this, EU tries to predict the 11 crop production for 35 countries. In South Korea, the agency says that rural crop survey is carried out on the ground (10 times/year). This causes problems such as high-cost, lowaccuracy, labor-intensive for crop survey, etc. Therefore, a government tries to substitute and supplement the existing method with remote sensing technology, making the statistics production to be scientific, precise, and resulted in costand labor effective. Nowadays, the agency tries to investigate the cultivated area with remote survey technique. In near future, remote sensing will be put to use at cultivated area acreages investigation. But, crop production and the estimated amount survey will need more high technology; therefore it should be planned in the long-term (NSO, 2010). 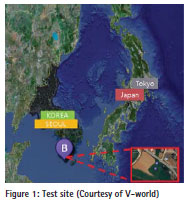 The test site, Haenam-gun, Jeollanam-do is located to the southwest of South Korea. Haenam-gun’s area is 992.87km2, but the test site had an area of 2,523m2, with one area of 1,792m2 and the other one 731m2, consisting of 2 cadastre parcels. The test site is very flat, no ground obstacles, no dense forest and open sky, which is no problem for UAV. Haenam is popular for nap cabbage which is harvested in winter.

This pilot project was conducted by Department of Business of Korea Cadastral Survey Corp (KCSC), Spatial Information Research Institute (SIRI) attached to KCSC, and Korea Rural Economic Institute (KREI) in Haenamgun. KREI is in charge of estimating the price and supply on demand of agricultural and stockbreeding products according to law, and then publishing it monthly.

In this study, UAV is manufactured by Spatial Research Institute (SIRI). The main components of the UAV are a remote control, the flight control software and its body. Equipped with six rotors, the UAV system possesses a maximum payload of 6.5 kg. Other important elements of the UAV are one GPS (Global Positioning System), one linear accelerometer, and two Gyros (e.g. IDG-500, IDZ-500). The detailed specification of UAV (Hexacopter) is prescribed in Table 1. 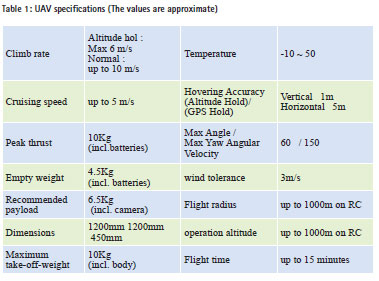 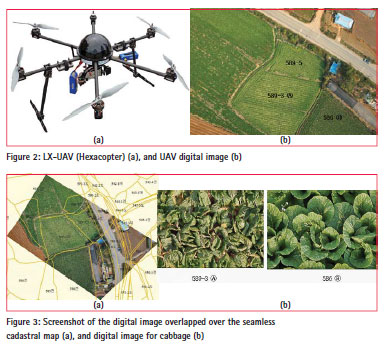 In particular, this UAV is just a prototype model for test. Hexacopter has 6 blades where 3 blades rotate in clockwise direction and 3 blades rotate counter-clockwise. Figure 2 shows an example of UAV (Hexacopter) and a digital image taken with a camera mounted on LX-UAV. In the test, UAV flies over 20 m ~ 100 m altitude.

Figure (3a) shows the screenshot of the digital image overlapping the cadastral map. By rubber shifting method, the digital image and the seamless cadastral map were compulsory moved and rotated, and then overlapped together even though there is some inconsistency between them. Figure 3(b) shows the screenshot of digital image taken over about 100m and 20m altitude on the ground. This process is supposed to be reasonable and cost-effective for a rural agency to have a quick look of crop growth survey in the office instead on site.

Small UAV images are taken in order to survey the farm products at the local province in South Korea as a pilot project. The results show that UAV digital images are enough to be reasonable for analyzing the parcel area, cabbage density, and crop. In high altitude flight (about 100m), it is possible to identify the crop approximately; in low altitude, it shows a good resolution image enough to distinguish leaf status and crop growth status. UAV digital images are expected to play a good role in providing objective data for crop analysis. And the seamless cadastral map was overlaid on top of the UAV digital image, encouraging rural agency to make a quick decision for crop analysis. In other words, it is required that the extension of flight duration time, image quality improvement due to wind, etc., and buying insurance for safety people, etc., should be considered for various applications.

Betterworldcampaign, 2013, The UN’s Use of Unmanned Aerial Vehicles in the Demoratic Republic of the Congo: U.S. Support and Potential Foreign Policy Advantages, p.11.