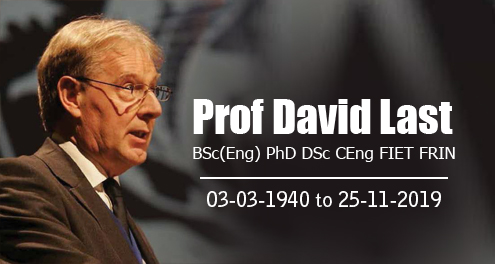 We have lost David Last. But his contribution to the domain of GNSS shall remain invaluable. Coordinates have been fortunate to have interacted with him on several occasions on range of topics. As we fondly remember him, following are excerpts of some of the insights that Prof Last shared with us…

eLoran comes up against a profound prejudice: GNSS replaced an earlier generation of terrestrial radio navigation aids. Recommending a terrestrial system to overcome the vulnerability of a satellite system is to swim against a powerful tide!

Galileo combined with eLoran would provide a robust technology; they can even share chips. The obstacles are not technical or financial, but political. Look: Europe has invested more than 10B Euros in Galileo; the last thing they want to hear about is its vulnerability! Norway – which had the best legacy Loran set-up in Europe – blew up its towers, filming their collapse as entertainment on Youtube. Absurd! The US Congress, in contrast, is now well aware of the weaknesses of GPS and has fostered an eLoran system. China, Russia, South Korea and Saudi Arabia have similar groundbased navigation stations. Europe is lagging some 20 years behind; the disappearance of Galileo in July came as a shock! Moreover, the provision of a US Loran system for 20 years would cost the equivalent of a single GPS satellite! Satellite navigation is much more attractive to industry and creates lots of jobs. Maybe Loran is just too cheap to survive; that’s frustrating! Coordinates September 2019

The advantages to countries or regions of providing their own GNSS are political, not technical. Indeed, so many satellites are now transmitting in the same narrow radio bands that the additional ones are raising the noise level with which they all have to cope!

But many countries are unwilling to have their critical national infrastructure or military capabilities dependent on a satellite system controlled by a foreign state that will always put its own interests first. Coordinates July 2018

On the direction of satellite navigation…

Satellite navigation was one of the outstanding innovative technologies of the late twentieth century, arguably the most successful, being widely adopted with remarkably few downsides, either social or environmental. Through the first decade of the twenty-first century the technology was refined: devices became much smaller, much cheaper, more powerful, and gained superior accuracy, integrity, availability and continuity. But by now we are 45 years on from the meeting at which the principal parameters of GPS were settled.

Satellite navigation has become a very mature technology in which major change is unlikely. Thus its direction will be more about an increase in the numbers of systems, satellites and receivers, all based on essentially the same old technology. But I do expect to see the cost of satellite systems and launchers continuing to fall. Coordinates July 2018

Brexit has already led to a conflict between the UK and the rest of the EU concerning future UK access to the Public Regulated Service (PRS), the military-grade part of Galileo. According to the EU, only member states have the right to access the PRS. The UK, requiring either PRS or an equivalent for military purposes has countered by stating that it will consider developing its own independent GNSS. Studies of this option are currently under way.

The row is complicated by the substantial role that UK companies, or the UK parts of multi-national companies, have played and are continuing to play in the development of Galileo. Brexit could end that cooperation, leaving unanswered questions concerning the intellectual property involved. It could also throw into uncertainty the position of the European Space Agency (ESA) which is not part of the EU but acts for it in certain ways.

It remains to be seen whether this conflict is genuine or part of the manoeuvring between the UK and the EU over the terms of Brexit and the future relationship between the two. Divorces can be messy affairs! Coordinates July 2018

Two yawning divides: the first between those who believe in rival satellite systems, centrally organised, and those for whom systems are now just components of GNSS with the receiver makers determining the mix. The second divide, between the Vulnerablists and the Autonomists, is turning into a sort of Global Warming of the navigation world, with proponents and deniers locking horns! Coordinates March 2015

Then, quietly, a revolution started in the world of navigation. The first phase of the revolution brought lower cost, smaller, higher performance navigation equipment. Amateur sailors and aviatorsgot technology more powerful than professional equipment, and very much cheaper: Decca Navigator and Loran-C sets for yachts, for example (Fig 1 & 2). The second phase of this revolution was driven by GPS. Navigators, the early adopters of satellite navigation, were rapidly followed by surveyors, geodesists, desert travellers – people with at least loose connections to navigation. But then came, farmers,motorists, truckers, people seeking not so much the high peaks of the great outdoors as the delivery bay at McDonalds! Soon, these nonnavigators outnumbered the navigators.Global navigation systems stopped being primarily about navigation; they became simply public utilities. And now we are entering a third phase of this revolution, where the utility that is Global Satellite Navigation becomes universal and largely invisible. The trigger for this phase was the US government’s requirement that cell-phone networks should automatically identify the locations of users who call the emergency 911 number. Many networks chose Assisted-GPS (A-GPS) technology, near instantaneous location measurements using a GPS receiver inside the handset, assisted by data passed to it over the cellular system (Fig3). This works, and the networks can now locate their users. Your phone can tell you where you are, download a map for you, guide you to your destination; it can locate the nearest police station, or hospital, pubs for young men and toilets for elderly gentlemen. It can give you tourist information, tell you of traffic problems ahead. Phones can track your children or your girlfriend, or your boyfriend! Of course, think of the Internet and spam: as you walk down a street, your phone will soon try to entice you into sleazy bars, dubious cinemas, or houses of ill repute! Worldwide, there will be soon be hundreds of millions of new users of global satellite navigation systems, GNSS. Most of them will neither know nor care that they are using a satellite navigation system. Our sophisticated navigation technology will simply have become a location sub-system of a low-cost consumer product….

…It could get much worse when people really try to stop satellite navigation. Many European countries now plan to charge road users. Motorists hate the idea, just as they hate radar speed traps. A jammer in a motorist’s car could disable GPS road user charging across a city – and at the same time disable GPS for the rest of the population. Who would track it down? How long would that take? That is the potential problem.

…These are indeed safety critical areas, and governments have responsibilities for them. But there is no sense here of governments recognising the role satellite navigation is now playing in their economies. What about telecommunications timing, mobile phone users and their emergency calls? The UK and other countries are saying that these millions of new users (perhaps 96% of the market) are not critical and do not really need satellite navigation. If there is a GPS problem, they can just go back to doing what they did before. But they no longer can!

…Why is Europe is producing a GPS look-alike? Like GPS, Galileo will be a Global Navigation Satellite System. It is broadly similar to GPS, using the same principles and radio frequency bands, so our receivers will pick up both. But they are very different in certain important respects. Coordinates February 2007