“India has been at the forefront at some unique systems like NRDMS, NRIS, NSDI, National GIS, etc.” said Dr K Kasturirangan, Former Chairman ISRO. He, however, lamented that though these systems definitions were successful but the implementation has not been successful

What Dr Rangan said was true but as the time has changed and so has the technological ambience around which the spatial technologies function. Some of these changes and challenges were addressed at International Workshop Advanced Spatial Analytics and Deep Learning for Geospatial Applications held during January 20 – 31, 2020 in Bengaluru, India organized by Centre for Spatial Analytics and Advanced GIS (C-SAG), Bengaluru and International Institute of Information Technology, Bengaluru (IIIT-B).

“This is the first of its kind workshop in India which has provided perspective and concepts of Data Science, Data Analytics – particularly Spatial Analytics, Artificial Intelligence, Machine Learning, Modelling – all centered around spatial data and geospatial applications. Specific applications and governance issues were addressed in the Workshop that has brought tremendous awareness of using Analytics and Deep Learning tools in GIS,” says Dr Mukund Rao, Chief Executive, C-SAG.

And as the workshop progressed, it ventured to explore the section where ‘spatial’ and ‘analytics’ overlap and interact.

When Geodata is Big data

The workshop provided a snapshot of the status of geospatial data generation, usages and many of the applications as it brought together the faculties of many of the leading organizations. Dr Mukund Rao gave a comprehension of how the technology, and application of Spatial Analytics has emerged at the forefront and will push GIS to insightful limits in future – especially becoming citizencentric in all its crowning-development. Dr Vishnu Chandra, Deputy Director General, National Informatics Centre shared a very interesting experience related to Swacch Bharat Abhiyan where people share the location of newly built toilets and pictures of their status. These information are validated later. Dr Shailesh Nayak, Director, NIAS ran through the complex phenomenon of earth system, its components like ocean and atmosphere and their interactions. He said that it is important to understand this relationship so that we can see the connection between the Indian monsoon and drought in Australia. He also elaborated on the role of Data Analytics and Modelling in weather forecasting. Dr PLN Raju, Director, North East Space Application Centre (NESAC) shared the role of NESAC and shared details of some of the projects being undertaking by his centre. Arvind Kumar, Head Bhuvan Content Generation Division, National Remote Sensing Centre spoke in detail about Bhuvan and how it is handling, managing, storing and also making accessible big data like satellite imageries. Dr P S Acharya, CEO NSDI shared learnings from SDI applications and Dr Debapriya Dutta, Head NRDMS, Department of Science and Technology discussed the spatial dimensions of spatial analytics. 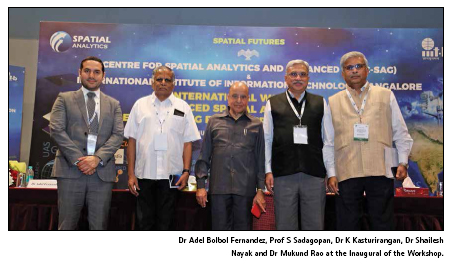 Lt Gen Girish Kumar, Surveyor General of India explained the mandate and activities of the Survey of India (SOI). He also spoke about Defence SeriesMaps (DSM) and Open Series Maps (OSM while discussing the issues of data availability and accessibility. He shared one interesting initiative of the SOI – SAHYOG App which facilitates the participation of citizens in map making processes. Taking the cue Dr Mukund Rao suggested why can’t the SOI engages with citizens of the country and involve them in designing, developing and managing a new series of maps – Citizen Series Maps (CSM) – Maps by the citizens, of the citizens and for the citizens.

“Gone are the days when we had paper maps which were not easy to rectify and update,” said Prof S Sadgopan, Director IIIT-B while emphasizing the need of a professional body that can bring cartographers and GIS together. He said that the time has changed. Now children see maps on phones. While elaborating on the interface between spatial and analytics, he said that though we have been talking about artificial intelligence since long but it is now being nurtured with the availability of data. What is required now is to develop applications that can benefit people.

“AI has evolved over time,” said Prof V Kamakoti, IIT Madras. “There was a time when Garry Kasparov played chess with computer but now it is proposed if he can play chess with a robot, – a significantly more complex proposition,” he added.

Prof NL Sarda, Retd Professor, IIT Bombay discussed some of the issues related to Data Analytics and Applications. He shared some of his experiences in banking segment and other areas. He emphasized while technologists do have the capabilities in data analytics, the domain expertise is important where applications are envisaged.

There was a clear message from the industry that it is aware of the challenges ahead is prepared to deal with it. Dr Ujaval Gandhi, Google Earth explained how Google Earth Engine, a cloud-based platform enables large-scale processing of satellite imagery to detect changes, map trends, and quantify differences on the Earth’s surface. Prof Praphul Chandra, Founder and Chief Scientist, KoineArth explored the intersection of Big Data, Blockchain and Machine Learning. He said that the blockchain adds the layers of trust when we process big data with Machine Learning. Dr Adel Bolbol Fenandez, Global Business Lead, Esri Middle East told how industry is repositioning itself to new challenges. Now the focus is multidisciplinary research and server-based solutions are encouraged. Vijay Kumar, Esri India elaborated on Advanced Data Analytics in ArcGIS and Dr Shailesh Desphpande, TCS came out with a study on how to leverage spatial and spectral mixture of urban objects for landuse classification. Vijay Khanna, Amazon Web Service discussed Cloud Configurations and Applications. Kasi Viswanadham Ponnapalli of IIC Academy detailed on processing aerial images in LiDAR and Shrikrishna Shastry, SkyMap Global elanorated on Geo Intellugence from Image Processing.

Professor Michael Goodchild, University of California Santa Barbara, USA spoke about the future of GIS and spatial analytics. He said that at present it is an interplay of four disciplines viz. Information System, Geographic Information, Artificial Intelligence and Data. He emphasized on the need to think on how to make GIS better using AI. He said GeoAI – an interdisciplinary field of geography and AI could be the way forward.

Data being generated is huge. Dr Rao painted the massive Datasphere – something that will blow up soon to different management systems. Millions of bytes are added every moment and many of these data have positional significance. Data Science, Machine Learning, Algorithms all have a role to play along with geospatial technologies. However, many questions were raised. What are these data, where they are generated, how to use them and for what they can be used, where they can be stored, how to archive? Are all data useful? What to do with them once they are used? How they can be discarded? How secure are the data? What if they are hacked? Misused? etc.

Prof V Kamakoti, IIT Madras was of the opinion that data storage is not an issue. Data can be stored in cloud. Even ML may help to find out which data are useful and which are not. However, the problem lies in their retrieval. As data formats keep evolving, it will be difficult retrieve them. Along with, data security is a major concern. Many of us are not even aware where the data related to us are stored and how they are used. We need to learn to live in this era of clouds but which cloud is trustworthy. Trust is not a term that can be defined mathematically.

Prof V Sridhar, IIIT-B alerted that Cyber Crime is a reality and data are being breached. Despite all the precautions and backups, possibility of hacking cannot be ruled out. These concerns were also shared by Ms Vinutha BN and Narendra N of Wipro.

It appears that Spatial Analytics and Deep Learning are set to be at the driving seat for Geospatial applications. Spatial on it own may not go beyond a point; it will be Analytics that will provide the needed acceleration